This standalone console wants to revolutionize set-top boxes with a unique interface.

Instead of trying to convince Android developers to customize content for old-fashioned gamepads, one Tel Aviv startup has developed the first controller that enables users to play all touch games and apps the way they are, without any modification. Dubbed ZRRO, the system is comprised of a standalone Android-based console that connects to any TV to make it smart and a touchpad powered by the company’s proprietary zTouch technology.

What’s great is that its controller mimics touchscreen functionality on the big screen, allowing you to interact with both games and apps in a much more natural, intuitive way. Not to mention, users can now access all million-plus Android games and apps directly from their TV, as if it were a huge tablet.

ZRRO consists of three elements: the Pad, the Box and your TV. First there is the Pad, which features a unique touch-based interface that mirrors a finger’s position onto the TV. Hovering lets you use your finger to navigate and select the right item while keeping your eyes on the screen. Special indicators reveal both the position of your fingers and the distance they are from the pad. Other touch gestures — including pinching, dragging and swiping — are supported as well. Meanwhile, a built-in accelerometer and vibration feedback round out the gamer-friendly design. 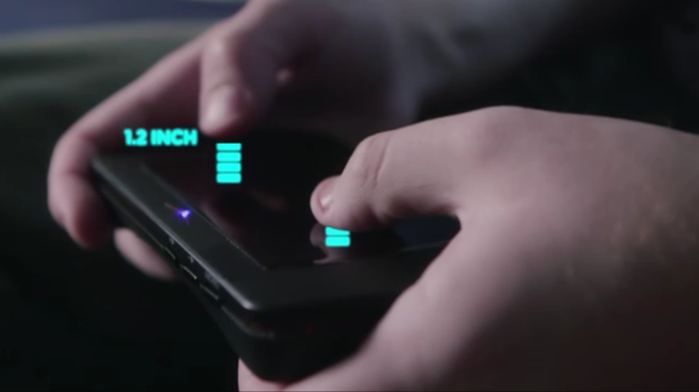 “Touchscreens today use one of two kinds of sensing technologies. Mutual-capacitance precisely senses individual touch points. Self-capacitance crudely detects fingers further away from the controller, but does not enable multiple detection (causing a ‘ghosting’ interference),” the team explains. “zTouch offers the best of both worlds, effectively solving the ‘ghosting’ problem. By changing the traditional grid layout to a dot matrix layout and developing special algorithms to analyze this new data, it has become the first multi-touch technology that precisely senses conductive objects (like fingers) up to 1.2 inches away from the pad with sub-pixel resolution.”

Secondly, the ZRRO Box is a set-top console with HDMI output that supports up to 4K resolution. Designed especially for gaming and entertainment, the device runs Android OS 4.4 on a 2.0GHz quad-core processor, packing 2 GB RAM and 16 GB of internal storage. There are also two USB ports on-board along with a a microSD card reader for expandable memory.

Ready to touch your TV from the couch? Head over to ZRRO’s official Kickstarter page, where the team is currently seeking $200,000.