This standalone console wants to revolutionize set-top boxes with a unique interface.

Instead of trying to convince Android developers to customize content for old-fashioned gamepads, one Tel Aviv startup has developed the first controller that enables users to play all touch games and apps the way they are, without any modification. Dubbed ZRRO, the system is comprised of a standalone Android-based console that connects to any TV to make it smart and a touchpad powered by the company’s proprietary zTouch technology. 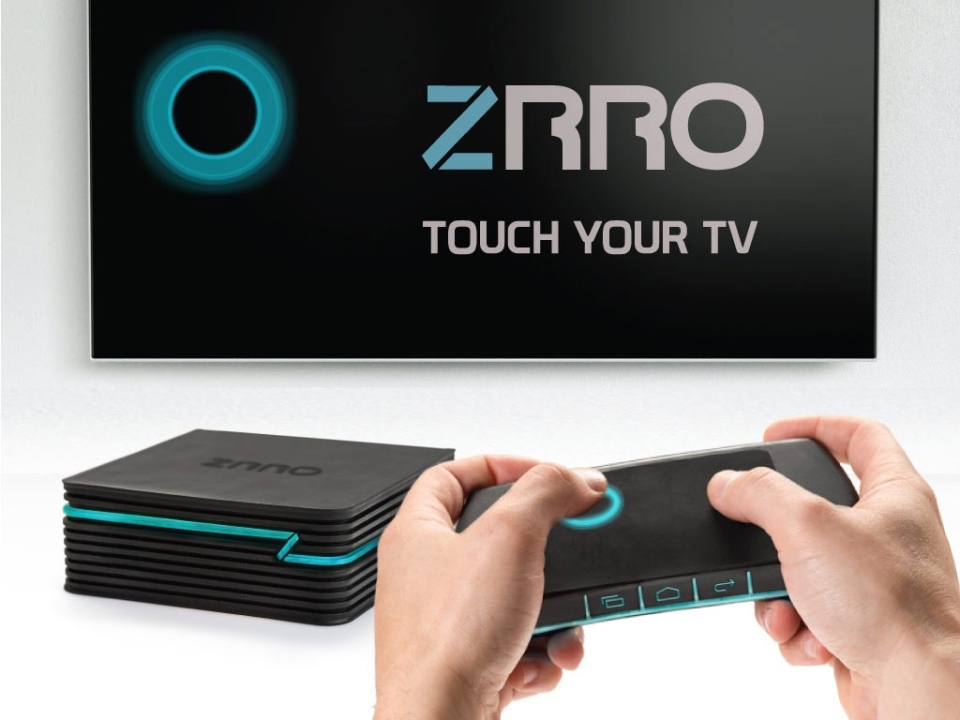 What’s great is that its controller mimics touchscreen functionality on the big screen, allowing you to interact with both games and apps in a much more natural, intuitive way. Not to mention, users can now access all million-plus Android games and apps directly from their TV, as if it were a huge tablet.

ZRRO consists of three elements: the Pad, the Box and your TV. First there is the Pad, which features a unique touch-based interface that mirrors a finger’s position onto the TV. Hovering lets you use your finger to navigate and select the right item while keeping your eyes on the screen. Special indicators reveal both the position of your fingers and the distance they are from the pad. Other touch gestures — including pinching, dragging and swiping — are supported as well. Meanwhile, a built-in accelerometer and vibration feedback round out the gamer-friendly design.

“Touchscreens today use one of two kinds of sensing technologies. Mutual-capacitance precisely senses individual touch points. Self-capacitance crudely detects fingers further away from the controller, but does not enable multiple detection (causing a ‘ghosting’ interference),” the team explains. “zTouch offers the best of both worlds, effectively solving the ‘ghosting’ problem. By changing the traditional grid layout to a dot matrix layout and developing special algorithms to analyze this new data, it has become the first multi-touch technology that precisely senses conductive objects (like fingers) up to 1.2 inches away from the pad with sub-pixel resolution.”

Secondly, the ZRRO Box is a set-top console with HDMI output that supports up to 4K resolution. Designed especially for gaming and entertainment, the device runs Android OS 4.4 on a 2.0GHz quad-core processor, packing 2 GB RAM and 16 GB of internal storage. There are also two USB ports on-board along with a a microSD card reader for expandable memory.

Ready to touch your TV from the couch? Head over to ZRRO’s official Kickstarter page, where the team is currently seeking $200,000.

It looks like we’re inching ever so close to a Minority Report-like future after all. That’s because Paris-based company Cicret (pronounced “secret”) is looking to kick the wearables game up a notch by transforming your arm into your phone’s screen. With the smart bracelet, the team’s promo video explains that “you can do what you use to do with a tablet but diretly on your skin and without any smartphone.” Say you’re taking a hot bath, for instance, and you want to catch up on the day’s emails. While your mobile device is nowhere to be found, you can simply pull up your inbox on your arm — soapy hands and all. Or, perhaps you’re waiting for a cab. Instead of having to reach down into your pocket, you can easily flick your wrist and access a game or the weather instantaneously. Reading a book on the sofa when a call suddenly comes in and your phone is out of reach? No problem! Answer right from your arm. Pretty convenient, right?

The Cicret bracelet, which resembles the Jawbone Up, works by projecting your Android interface directly onto your forearm, turning your limb into an interactive, swappable, touch-sensitive, full-color display. It operates as a standalone wearable device and is activated with a whisk of the wrist. According to its team, the idea was first conceived a year ago and developed over a span of six months.

Does it seem too good to be true? Well, time will only tell. Unfortunately, at the moment there isn’t a prototype. (*Scratches head.*) However, Cicret co-founder Guillaume Pommier has told Gizmag that the first prototype is due for completion in approximately three weeks time.

Meanwhile, a team from Carnegie Mellon University’s Future Interfaces Group has been able to create touch-sensitive projected icons made on a user’s skin, aptly named Skin Buttons. While it may not be an entire screen display, the design does demonstrate a new way to “expand the interactive envelope around smartwatches, allowing human input to escape the small physical confines of the device.”

As previously reported on Bits & Pieces, the proof-of-concept implementation can be used for a range of applications, many of which typically found on a mobile device, such as accessing music, reading emails and text messages, as well as checking the time or setting an alarm. The prototype is comprised of four fixed-icon laser projectors along with accompanying infrared proximity sensors. These are connected to an ATmega328P based board, which communicates over USB with a host computer. Additionally, a 1.5-inch TFT LCD display is driven from a host computer. While the team used an external computer for prototyping, it appears that a commercial model would be self-contained.

Well, regardless as to whether or not Cicret’s idea will come to fruition, it’s clear that we are ever so close to a skin interface future. A future in which even Dick Tracy would likely be impressed by the mere notion of such wearable gadgetry.

The question is, what’s next for this tech space? If these ideas are a glimpse into what we can expect in the forthcoming months, we’re excited!

Computer screens. Gift boxes. Beers cans. Cork boards. Bart Simpson. Pikachu. Each of these things can become touch interfaces thanks to a new proof of concept demonstration from Russian creative agency The Family. By hacking a standard Leap Motion sensor, the team was able to calibrate the device to interpret gestures. Watch it in action below!