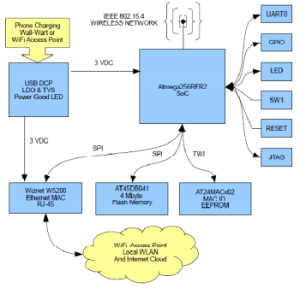 The engineering rep also noted that the reference design was formulated with low BOM cost as a primary objective. As such, the design is free of superfluous accessories and non-essential sub-systems, with a standard JTAG interface provided for programming and debug.

Atmel’s design includes optional EEPROM and Data-Flash memory sockets, while DC power is derived from a USB Micro-B Dedicated Charge Port (DCP) – allowing users to power the gateway with common phone chargers or from Wi-Fi Access Points via USB ports. As expected, both the USB and Ethernet connections have ESD/EMI suppression to improve reliability.

In terms of operation, connections to the LCGW are relatively simple. Connect the DCP to a USB power source using the Micro-B connector and D3 will light indicating DC power is ready. Then, connect the RJ45 Ethernet port to a router with a CAT5 patch cable.

“Atmel’s ATmega256RFR2 can be programmed and debugged using the 10-pin JTAG header and Atmel JTAGICE programmers. SW2 is a hardware RESET for the CPU, while Ethernet MAC Reset is driven by software,” the engineering rep explained. “And J5 exposes the power rails for testing. There are several user defined features: UART0, Port F GPIO, SW1 and D1 are uncommitted and available to the application developer.” 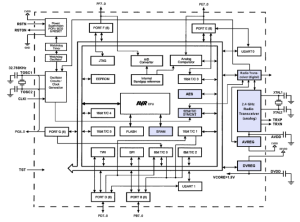 Interested in learning more about Atmel’s low-cost gateway reference design? Be sure to check back tomorrow for part two of our in-depth look at the ATmega256RFR2-powered LCGW.