Rice University researchers have created a flexible battery that could potentially power future generations of wearable devices.   Developed by Rice chemist James Tour and his colleagues, the design comprises flexible material with nanoporous nickel-fluoride electrodes layered around a solid electrolyte.

The flexible power source delivers battery-like supercapacitor performance, combining the best qualities of a high-energy battery and a high-powered supercapacitor – without the lithium found in current commercial batteries.

According to Rice postdoctoral researcher Yang Yang, the electrochemical capacitor is about a hundredth of an inch thick, although it can be scaled up by increasing the size or adding layers. In terms of slimming down the battery, Tour believes standard manufacturing techniques will likely allow the battery to become even thinner.   In tests, the students found their square-inch device held 76 percent of its capacity over 10,000 charge-discharge cycles and 1,000 bending cycles.

As Tour notes, his team set out to find a material that offered the flexible qualities of graphene, carbon nanotubes and conducting polymers – all while possessing significantly higher electrical storage capacity typically found in inorganic metal compounds. Unfortunately, inorganic compounds have, at until recently, lacked real flexibility.

“This is not easy to do, because materials with such high capacity are usually brittle,” he said.

“And we’ve had really good, flexible carbon storage systems in the past, but carbon as a material has never hit the theoretical value that can be found in inorganic systems, and nickel fluoride in particular.”

“Compared with a lithium-ion device, the structure is quite simple and safe. It behaves like a battery but the structure is that of a supercapacitor,” he explained. “If we use it as a supercapacitor, we can charge quickly at a high current rate and discharge it in a very short time. But for other applications, we find we can set it up to charge more slowly and to discharge slowly like a battery.”

To create the battery/supercapacitor, Tour’s team deposited a nickel layer on a backing, subsequently etching it to create 5-nanometer pores within the 900-nanometer-thick nickel fluoride layer (facilitating a high surface area for storage). 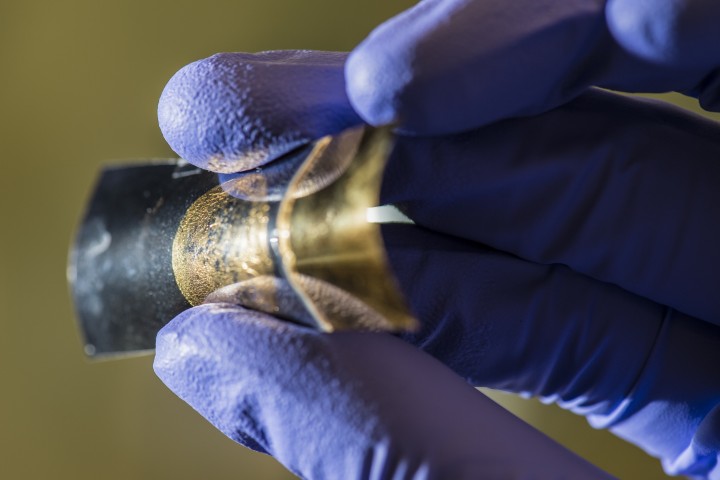 Once the researchers removed the backing, they sandwiched the electrodes around an electrolyte of potassium hydroxide in polyvinyl alcohol. Testing found no degradation of the pore structure even after 10,000 charge/recharge cycles. Similarly, the scientists confirmed no significant degradation to the electrode-electrolyte interface.

“The numbers are exceedingly high in the power that it can deliver and it’s a very simple method to make high-powered systems,” Tour added. “We’re already talking with companies interested in commercializing this.”