Over the last couple of years, the Maker Movement has ushered in a new wave of low-cost hardware that enables anyone of any age and skill level to begin tinkering. Easy-to-use boards like the Arduino continue to lower the barriers to entry, while simplifying the prototyping process. Ultimately, this allows kids to explore basic electronics, learn coding, pursue STEM-related disciplines, and in some cases, even start their own business.

Do you recall what you were doing back in the summer of fourth grade? Chances are you weren’t creating a programmable, SAM D21-based smartwatch like eight-year-old Omkar Govil-Nair, let alone launching a successful crowdfunding campaign.

Quin Etnyre already has quite the resume for a 15-year-old. After discovering his passion for tech, the self-taught whiz-kid has created his own company Qtechknow, taught classes at MIT, been invited to the White House and garnered over $40,000 on Kickstarter all within three years. Most recently, he introduced a tiny Arduino-compatible board complete with a built-in battery charger and fuel gauge.

What do you do when you’re a 13-year-old app developer who doesn’t have the money to shell out for a new pair of Google Glass? You build your own, of course! Hong Kong resident Jordan Fung devised a smart glasses attachment powered by an Arduino Nano (ATmega328) that shows him data and control information via a tiny FLCoS display.

“What if there was a way to record our own sounds and play them back whenever we flew our LEGO spaceship?” This was the simple question that prompted eight-year-old Chase Freedman to explore his imagination and develop an attachable, Arduino-friendly device that lets kids record or download sounds to enhance their playtime experience.

Jimmy Fallon welcomed 14-year-old Sahar Khashayar onto his show earlier this year. The ninth grade student had the chance to demonstrate her inexpensive device capable of detecting wildfires (and house fires, too) and sending a text alert to emergency personnel before flames rage out of control.

During a Maker Camp last summer, 13-year-old Nick Anglin noticed that there was a void in the market for Little Leaguers looking to learn how to pitch accurately. Whereas most middle schoolers would simply draw a rectangular box out of chalk on a brick or concrete wall and then proceed to throw the ball at the makeshift strike zone, this Maker decided to take a much more high-tech route with the help of lasers and Arduino.

With the help of 3D printing and Arduino, Nilay Mehta was able to build an inexpensive, voice-controlled robotic arm. The Irvine, California high school student programmed the unit to mimic the movements of an actual human hand, such as pinching, grabbing or holding a utensil. Using voice commands through a two prong microphone attached to the limb, the arm can carry out specific actions at the request of its wearer.

What do you do if you’re a 17-year-old whose aspirations of flying an airplane have been grounded by the FAA due to a pre-existing medical condition? Having been interested in aviation for quite some time and still determined to one day earn his Class 3 pilot’s license, Aidan Fay decided to design a full-scale Cessna 172 simulator right in his bedroom. And unlike other computer programs and video games available today, the San Diego-based Maker wanted a system that would take his training to whole new heights. His life-size cockpit includes everything from pedals that control actual airplane rudders and brakes, to a steering yoke, to an Oculus Rift running Lockheed Martin’s Prepar3D software for a truly immersive experience.

As seen at the Westport Maker Faire, second grader Emmett White came up with a Pinewood Derby car that uses an Arduino Nano, an accelerometer and an LED display to collect and display information as it travels.

Wake up and smell the coffee, literally. This is what Guillaume Rolland, an 18-year-old French entrepreneur, set out to accomplish with the world’s first olfactory alarm clock. The unit awakens its user with a scent rather than an abrupt audio alarm.

Every Friday, we take a look at some of the smartest, most innovative projects that caught our attention on Kickstarter and Indiegogo over the last seven days.

This spherical drone is not only safe, fun and autonomous, it’s fully open and programmable. Fleye is currently seeking $185,837 on Kickstarter.

This pair of sneakers can display custom designs on its e-paper exterior, right from your smartphone. ShiftWear has well surpassed its $25,000 goal on Indiegogo.

This collection of building blocks adds a layer of technology to make the old-school way of learning much cooler, and smarter. DXTR Labs is currently seeking $50,000 on Kickstarter. 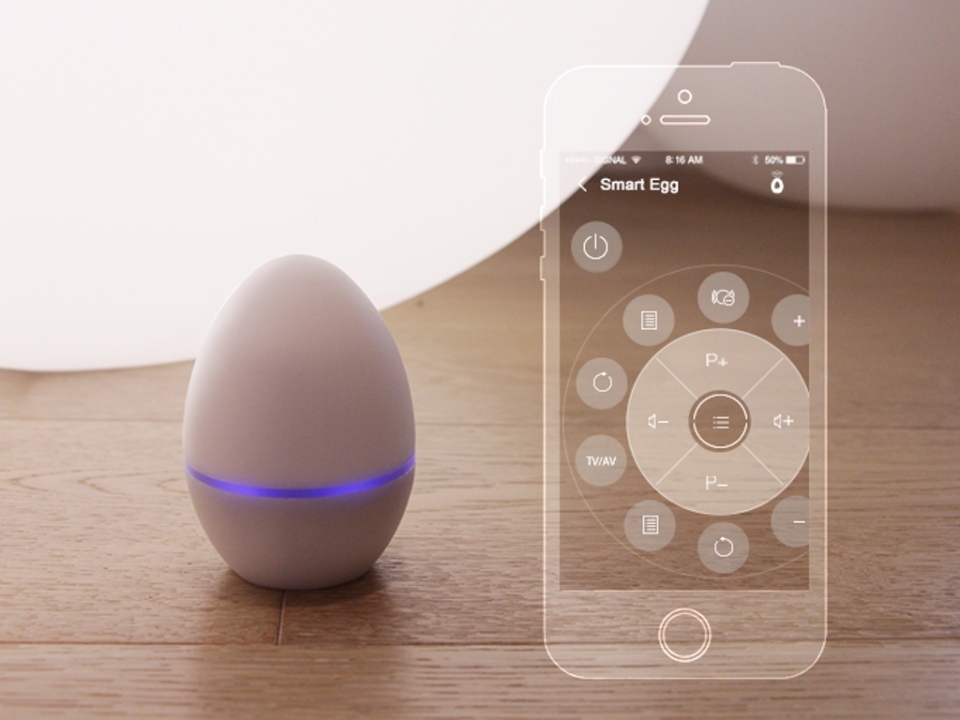 This egg pairs to your smartphone and allows you to control any infrared device via Bluetooth. AICO Tech is currently seeking $50,000 on Kickstarter. This one-click machine wants to make 3D printers as ubiquitous in our homes as more conventional 2D printers. Skriware is currently seeking $50,461 on Kickstarter.

This unit simply sticks to your keys, wallet, glasses, luggage, headphones or whatever else you don’t want to lose, and takes care of the rest for you. Wuvo is currently seeking $15,000 on Indiegogo.

This set of sleek, permanent and weather-resistant holiday lights are installed only once and managed straight from your phone. EverLights has more than tripled its goal of $20,000 on Kickstarter.

This plug-in gadget enables you to track autocross, drift and drag racing with your friends in real-time. Autosport Labs is currently seeking $50,000 on Kickstarter. 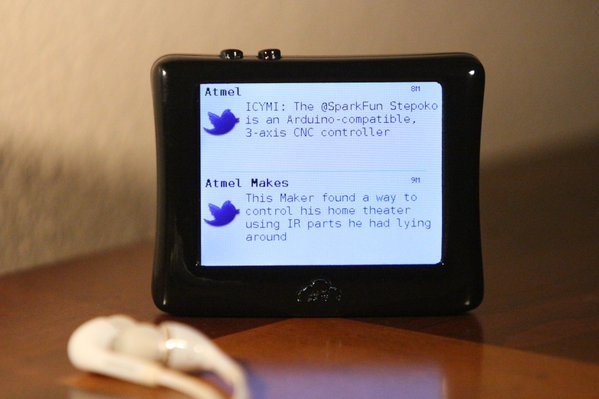 This newswire sits on your desk and continually streams headlines from your pre-selected content sources. Pound Nine is currently seeking $40,000 on Kickstarter. 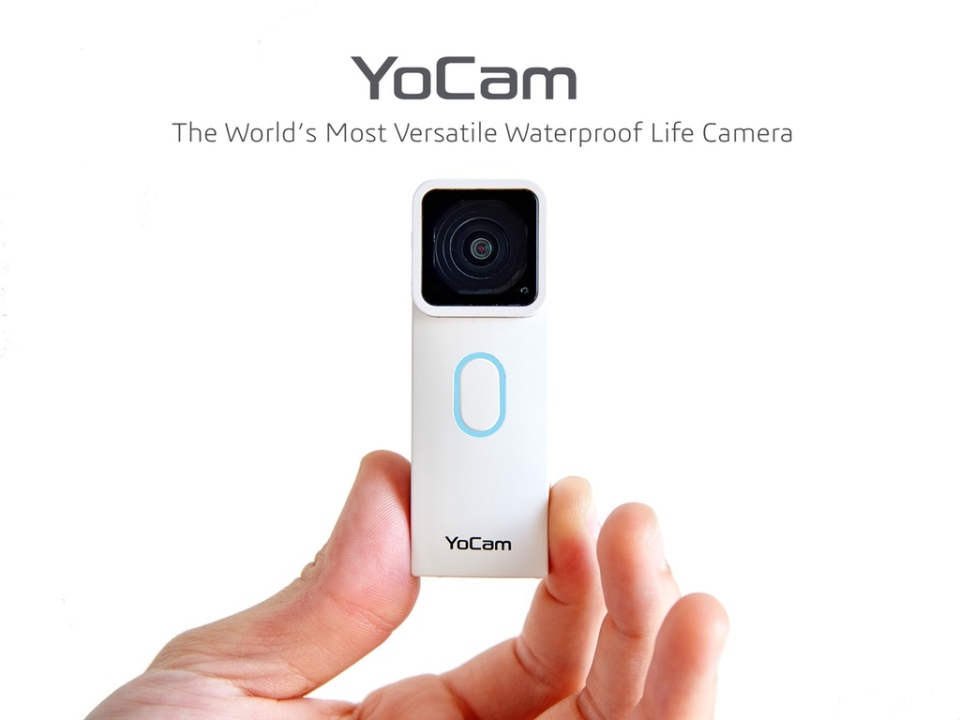 This tiny, all-in-one, waterproof camera has set out to replace your GoPro, DropCam, baby monitor and dash cam. MOFILY is currently seeking $80,000 on Kickstarter. 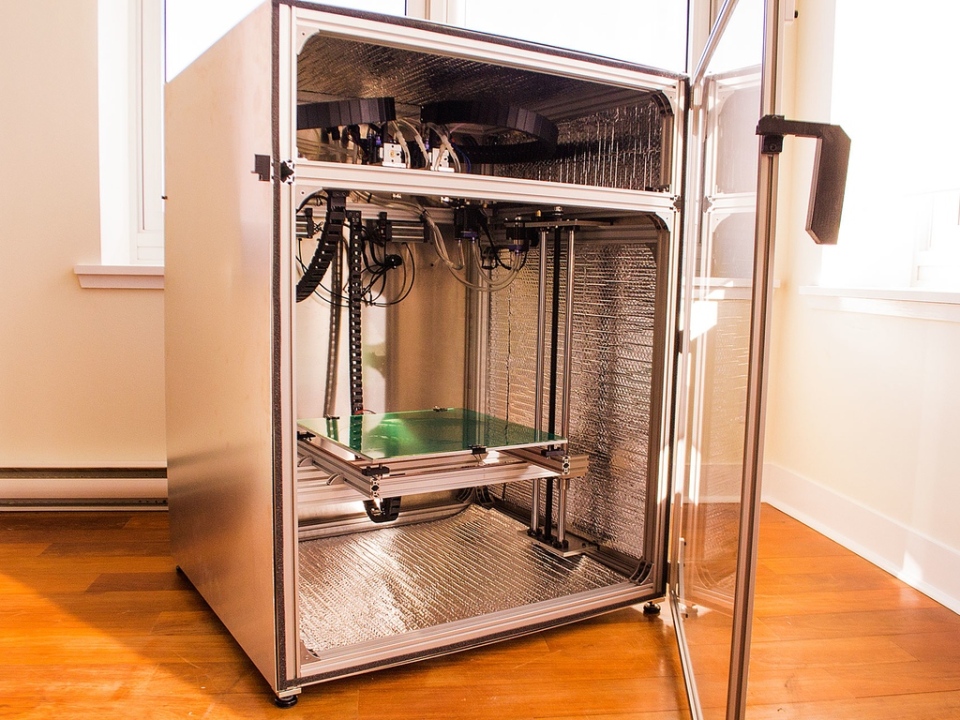 This inexpensive and easy-to-use 3D printer will bring the joy of creativity into any household. Qubea is halfway to its goal of $120,000 on Kickstarter. 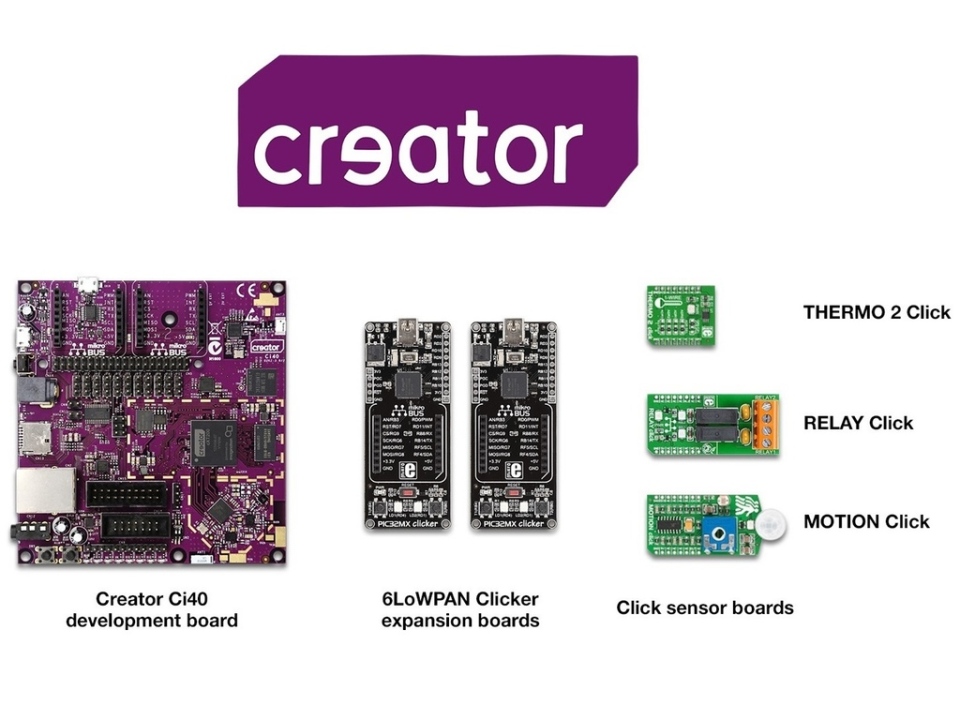 This battery-free wearable weather station measures UV and temperature while displaying the safe sun time on your mobile device. Comfable Inc. is currently seeking $26,184 on Kickstarter.

This knob precisely controls a wide range of applications. NOB CONTROL is currently seeking $55,220 on Kickstarter.

This open source, 3D-printed, modular robotics platform is ideal for Makers looking to explore their imagination. Rocketship Systems is currently seeking $15,000 on Kickstarter.

This portable, motion-tracking, sensor-laden device can analyze and help improve swing performance and footwork with its accompanying app. Coach Labs Inc. is currently seeking $25,000 on Kickstarter. 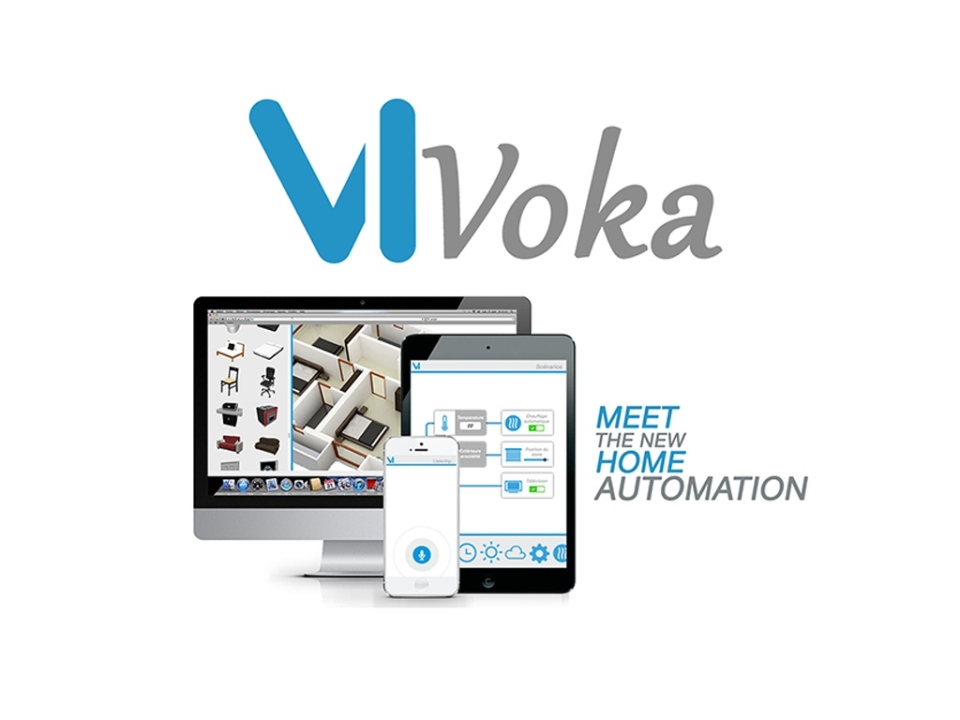 This home automation solution lets you to command your connected objects through voice and 3D mapping. Vivoka is currently seeking $105,870 on Kickstarter. This smartwatch is being touted as the “most reliable one for under $100.” Mimoto Tech is currently seeking $25,000 on Kickstarter.

This portable and wearable LED strip is controlled via Bluetooth. Lumafi is currently seeking $25,000 on Kickstarter. 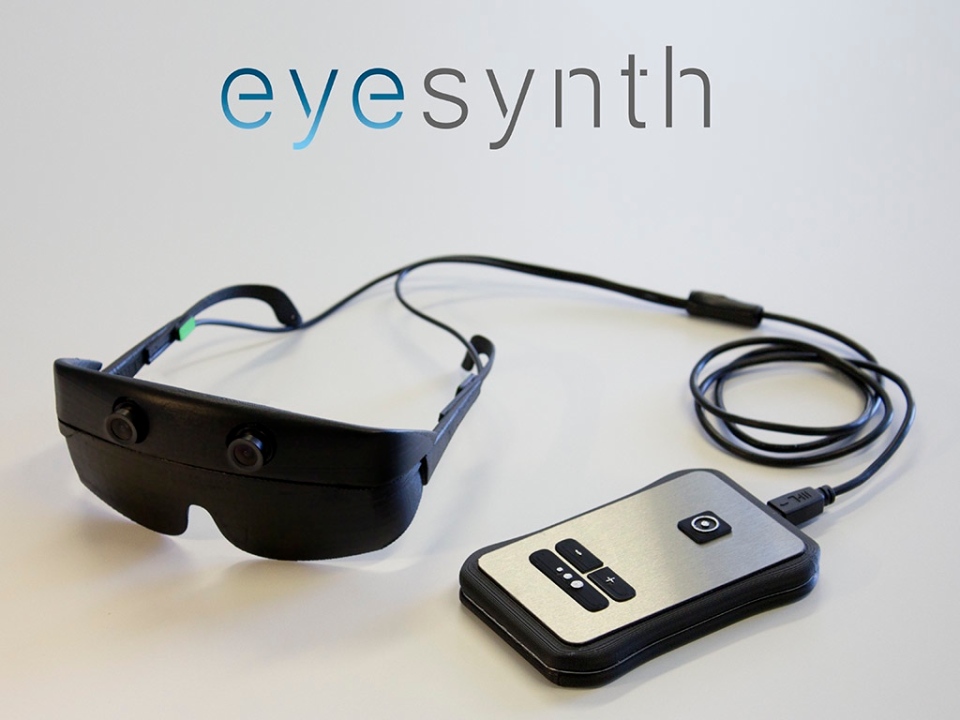 This audiovisual system for the visually-impaired enables wearers to indentify shapes and spaces in unprecedented ways. Eyesynth is currently seeking $106,193 on Kickstarter.

This shield for the Raspberry Pi 2 combines SSD, Wi-Fi, a real-time clock with battery and high-power USB. Pi 2 Design is closing in on its $15,000 Kickstarter goal.

This rocket-shaped device will add motion-activated sound effects to any LEGO or Mega Bloks project.

“What if there was a way to record our own sounds and play them back whenever we flew our Lego spaceship?” This was the simple question that prompted eight-year-old Chase Freedman to explore his imagination and resulted in the conception of the Brick Sound Kit — an attachable device that allows users to record or download sounds to enhance their playing experience. 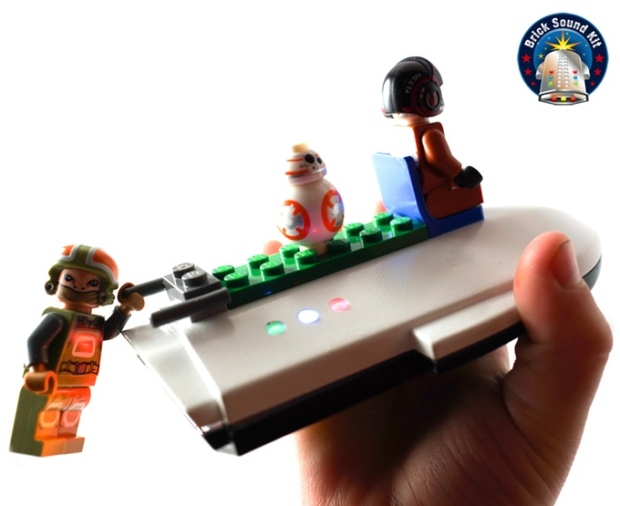 Instead of having to actually make the typical “whoosh,””pew pew” and “pow pow” noises  yourself, the Brick Sound Kit enables children (and those who are still kids at heart) to transform their toys into interactive machines. Recreating your favorite scenes from Star Wars has never been so much fun!

The BSK is built around an Arduino-friendly board equipped with an ATmega328, LEDs, light-up buttons, a AAA battery and a gyroscope, all protected by a highly durable, rocket-shaped enclosure. This casing not only functions as a standalone toy, it can easily snap onto anything you build with Lego, Mega Bloks, Kre-O and other compatible brick building sets.

Freedman’s innovation is ready for use right out of the box. What’s more, it can be paired over Bluetooth with the accompanying BSK Sound Effects App, along with other apps and games to add more interaction to the your bricks in just minutes.

And that’s not all. The Brick Sound Kits includes an FTDI USB adapter and cable so you can reprogram the gadget’s capabilities using free Arduino tools. Open source SDKs let anyone build their own apps and games controlled by the BSK. All programming is super simple for users of any age or skill, and will be supported by the team through a developer portal.

The young Maker didn’t do this all by himself; in fact, he collaborated with his father, Chuck, to bring the idea to life — and now Kickstarter. After receiving enormous amounts of great feedback from friends and family, the duo looked into how they could commercialize the invention and make it something that other people could use. The two ended up contracting Boston University Electronics Design Facility to develop the kit’s circuit board and Clear Design Lab of Boston to design the housing.

“The Brick Sound Kit is not only a device for kids. It was also developed to be used by enthusiasts and collectors, that want to enhance the device even further and create their own programs and sounds. All this comes together in a marketplace where sounds, apps and games can be exchanged between Brick Sound Kit users and developers,” dad explains.

Are you ready to make the spaceship of your dreams? Then fly on over to the Brick Sound Kit’s Kickstarter campaign, where the father-son duo is currently seeking $18,000. Amazingly, Chase is actually the second eight-year-old Maker to launch a crowdfunding campaign this year. Over the summer, Omkar Govil-Nair debuted his O Watch, which went on to garner more than $18,000.