A finalist in this year’s Hackaday Prize, FarmBot is a perfect example of how the DIY Movement can make a long and ever-lasting impact on our world. The brainchild of Rory Aronson, the project is an open source CNC farming machine that hopes to make an open food future more accessible to everyone. 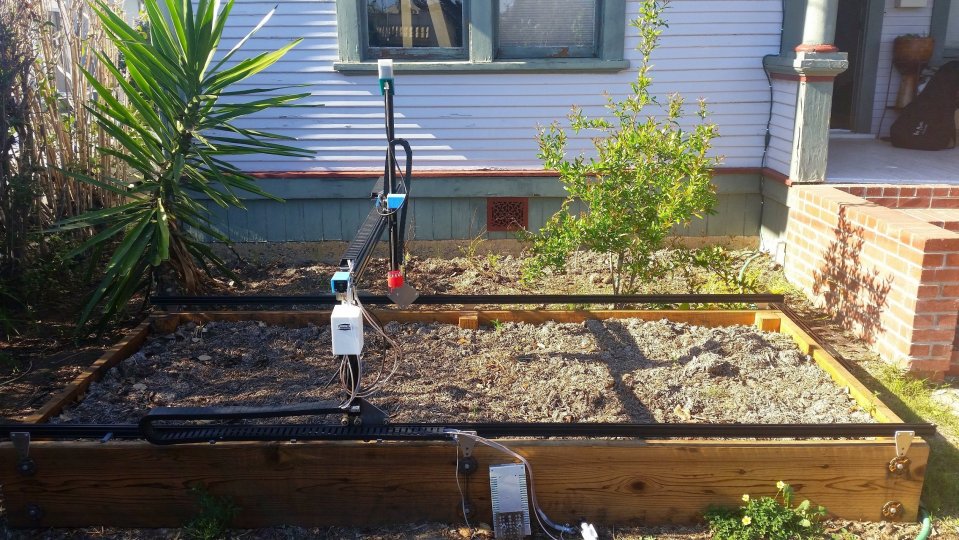 Essentially, FarmBot is like a giant 3D printer that, but instead of extruding plastic, uses seeds and water to grow crops. Similar to 3D printers and CNC mills, FarmBot hardware employs linear guides in the X, Y, and Z directions, which allows for tooling such as seed injectors, watering nozzles, sensors, and weed removal equipment to be precisely positioned.

Not unlike many RepRap printers available today, FarmBot is controlled by the Arduino Mega (ATmega2560)/RAMPS stack, along with an Internet-connected Raspberry Pi 2, NEMA 17 motors and rotary encoders. The open source device can cultivate a variety of crops all in same area at the same time, and can impressively care for each one in an optimized, automated manner.

According to Aronson, the outdoor XYZ unit can be constructed to fit each owner’s individual needs. It can scale from a garden as small as one square meter to as large as a farm that’s 20 square meters. In terms of cost, the Maker estimates a FarmBot to run anywhere from $1,500 to $4,000, depending on the size of the installation. And since it’s comprised of corrosion-resistant aluminum, stainlees steel and 3D-printed plastic components, it’ll withstand Mother Nature for years.

Using the web-based app, a user can graphically design their farm or garden to their desired specifications and then synchronize the numerical control code with its embedded hardware. With its sequence builder and scheduler, FarmBot combines the most basic operations in custom sequences for seeding and watering, and even enables you to build complete regimens for the plant throughout its lifetime.

What’s more, a drag-and-drop interface lets users graphically design the plant layout in a game-like environment similar to FarmVille. Aside from that, additional features of its software include storing and manipulating data maps, accessing an open plant data repository, and real-time control and logging. Moreover, an integrated decision support system can automatically adjust water, fertilizer and pesticide regimens, as well as handle seed spacing and timing based on soil and weather conditions, sensor data, location and the time of year. 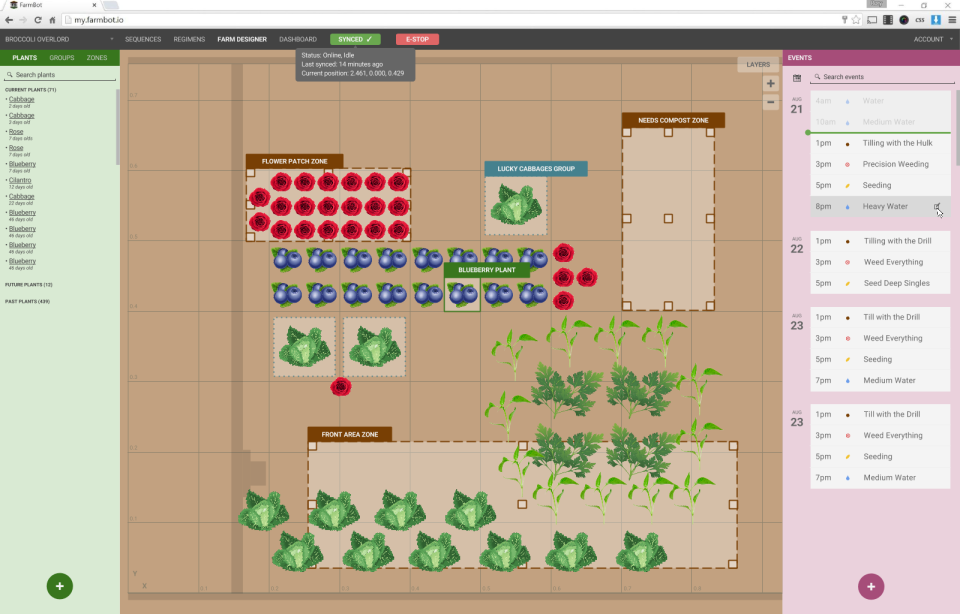 Looking ahead, the team is experimenting with sensors, drills and a camera tool, and more importantly, hopes to expand its community of hackers and DIY food enthusiasts interested in developing the platform. FarmBot will come in two different kits, Genesis and Genesis XL, 1.5 meters by 3 meters and 3 meters by 6 meters, respectively. The latter will be capable of growing four times the amount of food as its smaller sibling. Both models can be used outdoors, inside a greenhouse or even on a rooftop.

Intrigued? Head over to the project’s page on Hackaday here, or watch its overview video below!