Researchers at the University of Houston have built a brain-machine interface to control prosthetic hands.

When it comes to brain-controlled interfaces, advancements in the space have come a long way since its earliest days of research at UCLA in the 1970s. Under a grant from the National Science Foundation and followed by a contract from DARPA, the papers published following the study marked the first appearance of the expression BCI in scientific literature. Now fast forward nearly 40 years and scientists are inspiring a wide-range of possibilities, including enabling amputees to command robotic limbs with their mind. 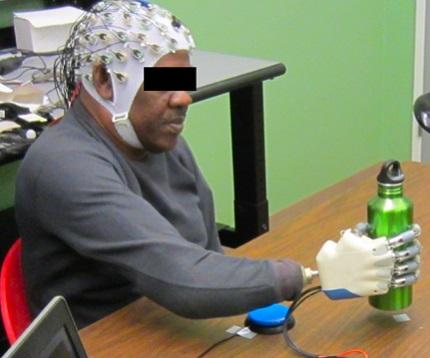 That’s exactly what one team from the University of Houston has done. The researchers have developed an algorithm that allowed a man to grasp a bottle and other objects with a prosthetic hand, powered merely by his thoughts. Instead of implants, this non-invasive method uses a wearable EEG cap that monitors brain activity externally through the scalp. During the its demonstration, a 56-year-old man whose right hand had been amputated was successfully able to clutch selected items 80% of the time, which included a water bottle, a small coin, a credit card and even a screwdriver.

While the ability to command prosthetics through brainwaves has been around, earlier studies centered around either surgically implanted electrodes or myoelectric control, which relies upon electrical signals from muscles in the arm. Beyond demonstrating that prosthetic control is possible using non-invasive EEG, researchers said the study offers a new understanding of the neuroscience of grasping and will be applicable to rehabilitation for other types of injuries, including stroke and spinal cord injury.

Reportedly, the work marked the first time an amputee has been able to use EEG-based BMI control of a multi-fingered prosthetic hand to grab objects, and could potentially lead to the development of improved artificial limbs. Interested in learning more? The team’s findings were recently published in the journal Frontiers in Neuroscience. You can also check out the study’s official page here.