kSafe is part of a research proven system that turns temptation into motivation.

As the saying goes, “Good things come to those who wait.” However, that is often times easier said than done, especially when it comes to resisting the urge to indulge in late night treats or satisfy your sweet tooth after coming home from work. That’s why one San Diego-based startup has developed a solution to help prevent you from giving in to temptation. Much like the way a dog handler trains puppies, the kSafe locks up what you want until you’ve reached your goals. 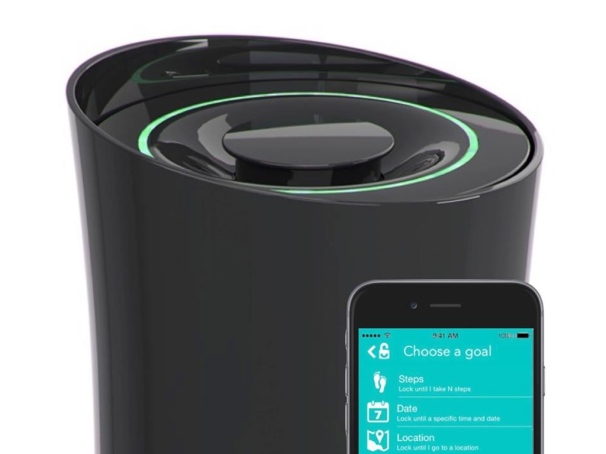 If the idea sounds a bit familiar, that’s because kSafe is the brainchild of Kitchen Safe inventors Ryan Sang and David Krippendorf, who first appeared on ABC’s hit series Shark Tank. In essence, kSafe allows you to lock up something you desire, whether that’s a chocolate bar, beer or even the TV remote. The only way to gain access to it is by achieving an activity goal that has been set, ranging from a step count for the day or a location goal like arriving at the gym. What’s more, it can serve as a time-based lock as well. Simply tell kSafe to only open on a specific day, week or month, or lock kSafe until a timer expires. This is perfect for those looking to trim down that waistline by cutting back on bad midnight snacking habits.

Each of these goals are controlled by its accompanying app, and can be configured to one of three different categories: activity, location and time. The app monitors your current progress and provides you with a breakdown your previous goals, so you can track just how far you’ve come. Beyond that, kSafe can also act as an old-fashioned password protected safe, which will only open with a personalized pin code.

The container itself features a circular LED light ring that fills to show progress at the touch of the top button. For instance, if you touch the button and 75% of the ring illuminates, then you’re three quarters of the way to reaching your goal. kSafe also features an open API for developers, enabling the product to be easily integrated with other smart systems.

kSafe is currently available in three colors, black-opaque, white-opaque, and white-translucent, making it an aesthetically-welcoming addition to any kitchen, living room or office. Interested in one of you town? kSafe has just launched on Kickstarter and is currently seeking $50,000. Shipment to early backers is expected to begin in November 2015.