All you need to do is think about changing the channel. Couch potatoes, rejoice!

If you’ve ever wished of turning on the TV or switching a channel by simply thinking it, you’re in luck. As recent projects have demonstrated, such sci-fi-like magic is well on its way of not only becoming a reality, but more accessible for DIYers to tap into the technology. In fact, Maker Daniel Davis — who runs the website “Tinkernut” — has developed a homemade mind-controlled TV remote using an old Star Wars Force Trainer game and Arduino. 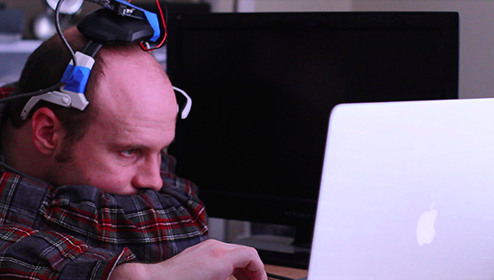 For those who may recall back in 2009, the brain-computer interface toy was released as part of Uncle Milton Industries’ Star Wars Science line. It included a headset that was capable of detecting a mind’s electric fields (similar to an EEG) and relaying the signals to a tube that used a fan to levitate a ball in the air. The harder the user focused, the harder the fan blew, and the higher the ball was suspended.

Upon tearing down the game, Tinkernut discovered a NeuroSky EEG chip embedded inside the accompanying headset, which he decided to connect to an Arduino Uno (ATmega328) to collect and convert the raw EEG data onto a computer. After scavenging an IR LED and receiver from an old VCR, the hardware was just about complete, and so, the Maker went on to create an IR remote. 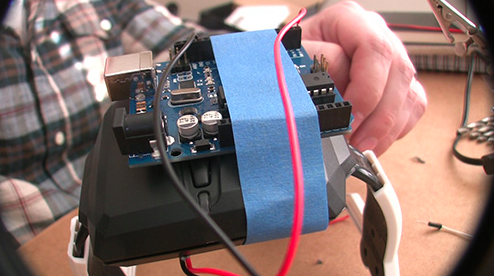 “Once this program is uploaded to your Arduino, open up the serial monitor, point a remote at the IR receiver and start pressing buttons. You should see a response in the results in the serial monitor screen. This will be the button code. You want to write down this code for later use,” the Maker writes.

With just a little coding, Tinkernut was able to combine both BCI and remote functionalities into one mind-blowing project that would enable the helmet to switch a TV on and off, simply by concentrating.

Intrigued? You can head over to the Maker’s official log, while also checking out his Arduino Brain Library on Github.

2 thoughts on “Creating a brain-controlled TV remote with Arduino”