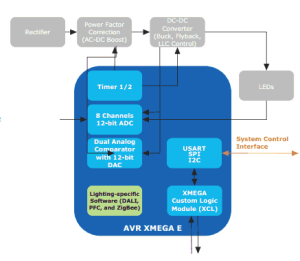 “In terms of energy efficiency, the XMEGA E, with its rich analog peripheral features, is capable of running a complicated power control algorithm (e.g. PFC) to achieve high power efficiency,” the engineering rep continued. “Plus, the XMEGA E offers ultra low power consumption as low as 100uA/MHz in active mode and 100nA in RTC/RAM retention. Last, but certainly not least, the XMEGA E qualifies for high temperatures at 105C and 125C.”

Want to learn more about designing LED power management platforms with Atmel’s XMega? Be sure to check out Atmel’s extensive lighting portfolio here.

LEDs are typically used as indicator lamps in various devices and lighting applications. Modern LED devices are available with very high brightness across the visible, ultraviolet and infrared wavelengths.

Interested in learning more about Atmel’s AVR XMEGA lineup? Be sure to check out the official XMEGA page here. Additional information about Atmel’s extensive lighting portfolio can be viewed here.

Earlier this week, Bits & Pieces introduced Atmel’s low-cost gateway (LCGW) reference design, powered by the versatile ATmega256RFR2 and WIZnet W5200. We explored the basics of the platform, including operation and CPU functions. We also took a closer look at the W5200 chip, memory, power system and antennae. Today, we will be diving into possible LCGW enclosures, regulatory compliance, debugging and software resources.

As we all know, users can be very creative with their enclosure designs. However, there are some basic guidelines for wireless devices. Perhaps most importantly, any metal or conductive material within 4 inches (10cm) of the antenna will have an effect on the far field radiation pattern. As such, metal enclosures should not be used. It is also recommended to keep metal parts such as screws, nuts and washers, metallic labels away from the PCB antenna area. Indeed, there are holes in the LCGW design which act as the preferred location for non-conductive fasteners.

In terms of regulatory compliance, the LCGW has been pre-tested for FCC Class B and CE compliance. Initial pre-scan data indicates this design is compliant with US and EU regulations. To obtain regulatory certification, developers will have to perform regulatory testing of their product in its final form – including enclosure and all application specific features. Although results may vary, the positive pre-scan results are reassuring and indicate the probability of successful certification is high.

The Atmel ATmega256RFR2 SoC used in the LCGW has a special Band-edge filter feature, which improves out-of-band rejection for channels 25 and 26 (2475 and 2480MHz.) The FCC defines a “Restricted Band” from 2483 to 2500MHz, meaning emissions in this Restricted Band are required to be below 54dBµV (500µV/m). Because of this requirement, many IEEE 802.15.4 devices are not able to use high power in channels 25 and 26. Nevertheless, the Band-edge filter feature of Atmel RFR2 radios allows the use of higher power in these channels. It should be noted that the FCC pre-scan data cited in this Bits & Pieces article was taken using the full output power of the  ATmega256RFR2  (+3.5dBm) and the Band-Edge feature enabled. The filer can be enabled by setting PLL_TX_FLT (bit 4) in the TRX_CTRL_1 (0x144) register.

On the debugging side, the DCP power inlet is fused for safety purposes. So if the Power-Good LED fails to light, be sure to check the fuse. If the fuse has blown and needs to be replaced, the root cause should be determined before putting the device back into service. For replacement parts, a 1 Amp 0603 SMT fuse is recommended (Bourns SF-0603S100, or equivalent). Do not use flipped CAT5 cables and be sure to exercise caution when connecting to Power Test Header J5, as this header exposes 5VDC and may damage low voltage GPIO or UART cables.

Although leveraging the 3.3V supply for light external loads is permissible, be advised that the 3.3V LDO has limitations on available line current, load current and thermal dissipation, so exceeding these limits may cause a malfunction. However, at maximum transmitter power, the Atmel  ATmega256RFR2  may exceed emissions limits in the 2483 to 2500MHz restricted band. This can be corrected by enabling the PLL_TX_FLT bit in the TRX_CTRL_1 register. Note – this special bandedge filtering feature of the Atmel RFR2 family allows use of high-power in channels 25 and 26.

Last, but certainly not least, Atmel supplies many network stacks that run on the ATmega256RFR2  These include the BitCloud ZigBee stacks, ZigBee Pro, ZigBee Light Link and ZigBee Home Automation, IEEE 802.15.4 MAC and the Atmel proprietary Light-Weight Mesh network stack.

Interested in learning more about Atmel’s low-cost gateway (LCGW) reference design? Be sure to check out part one  and two of this series.