If you’ve been following along with Microsoft’s annual Build developer conference, or have attended one of Hackster.IO’s recent Hardware Weekend events, then you know that the Seattle-based company has joined the list of major brands embracing the Maker crowd. Testament to that, the tech giant has announced a partnership with Arduino, making Windows 10 the world’s first Arduino-certified operating system.

The story was revealed amidst plenty of other exciting things from the week, which included a demonstration of the HoloLens augmented-reality headset, the introduction of the Azure Data Lake big data repository, Microsoft Edge being named Internet Explorer’s successor, in addition to Windows 10 becoming the OS that consumers will use across their PCs, smartphones, tablets and Xbox One game consoles.

Speaking of the new OS that will be able to run iOS and Android apps on both desktop and mobile devices, the company also shared some remarkable news for the DIY community. Windows 10 IoT Core is a new Windows 10 edition for low-cost, small-footprint devices that will be available for Makers and commercial device builders — at no cost.

Alongside the much anticipated Insider Preview of Windows 10 IoT Core for Raspberry Pi 2 devices, Microsoft has released a range of tools in the Arduino-certified Windows 10 that serve as a bridge between the Universal Windows Platform and the incredibly-popular Atmel based hardware: the availability of Windows Remote Arduino and Windows Virtual Shield for Arduino open-source libraries. The Arduino-certified Windows 10 will enable developers to make smart devices that combine the hardware-driving capability of Arduino with the software capabilities of Windows.

“An example might be a security camera. One could build a camera using Arduino to power the motor controls to tilt/turn the camera and using Universal Windows Platform one can create great UI, connect the camera to the cloud, process the image for motion detection and add facial/voice recognition,” Microsoft’s Steve Teixeira writes. “The work we have done on Windows 10 is the bridge between the Universal Windows Platform and Arduino hardware.”

With Windows Virtual Shield for Arduino, developers will have the ability to tap into the incredible power of Windows 10 devices through wireless protocols. For instance, a Lumia 530 contains well over $200-worth of shield sensors and capabilities, and now Makers can tap into all of those sensors and capabilities from an Arduino as if they were standard hardware shields.

“Imagine being able to create an Arduino project that includes GPS, Web connectivity/parsing, touch display, speech technologies and more. We’re particularly fond of the picture the weather project we’ve created that lets you bring your children’s drawings to life.”

Secondly, Windows Remote Arduino gives users the opportunity to extend their Universal Windows Application with Arduino commands that execute on a wirelessly-connected hardware device. This combines the power of Windows 10 device features, like image processing, speech recognition, website parsing, cameras and advanced audio pipelines, with the power of physical world interactivity through Arduino.

Adding a little more icing to the cake, Microsoft has unveiled their ongoing relationship with our pals at Hackster.IO, which includes collaboration on hackathons using Windows and Azure. The company has even tapped Hackster.IO’s project gallery to showcase a number of sample Maker projects and more.

“Our goal is to give Makers the opportunity to play with the software bits early and to listen to the feedback on what’s working well and what we can do better. You may notice some missing drivers or rough edges; we look forward to receiving your feedback to help us prioritize development work,” Teixeira explains. “We’ll be incorporating the feedback we receive into regular software updates along with additional drivers, bug fixes and new features. Those looking for a commercial-quality release should wait for general availability this summer.”

Undoubtedly, this is an exciting time for the DIY community, especially in the days leading up to Maker Faire Bay Area! If you want to learn more, head over to Microsoft’s official page here.

WidgeDuino – which recently made its Kickstarter debut – is an intelligent and easily configurable Windows-based application for communication between a Microsoft Windows platform and a microcontroller based system such as an Atmel-based Arduino board.

Essentially, WidgeDuino communicates with the microcontroller system via serial protocol or TCP/IP. 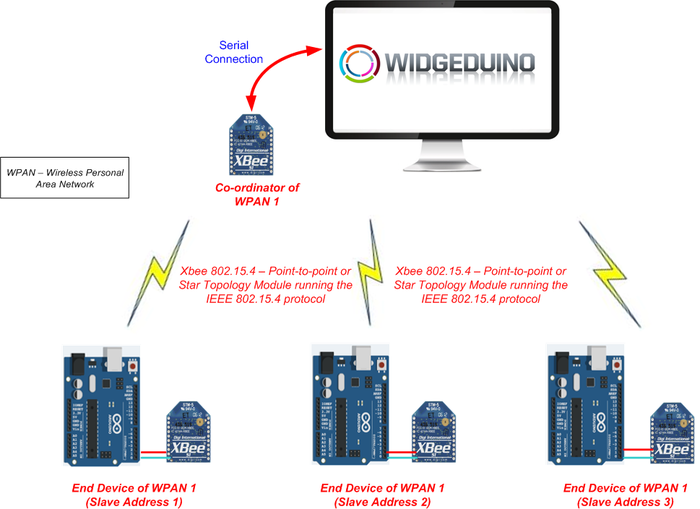 “This includes, amongst others, keypad, LEDs, gauges, knobs, sliders, thermometers, tanks and buttons. Its intuitive approach to communication simplifies rapid prototyping and development of a complete automation system.”

More specifically, Widgeduino is based on Microsoft’s .NET framework, using the popular Visual Studio Windows Presentation Foundation (WPF) as its designer. It leverages National Instrument controls to enable the control of devices connected to the microcontroller system.   As noted above, the app runs on a Windows system and supports both wired and wireless connections. 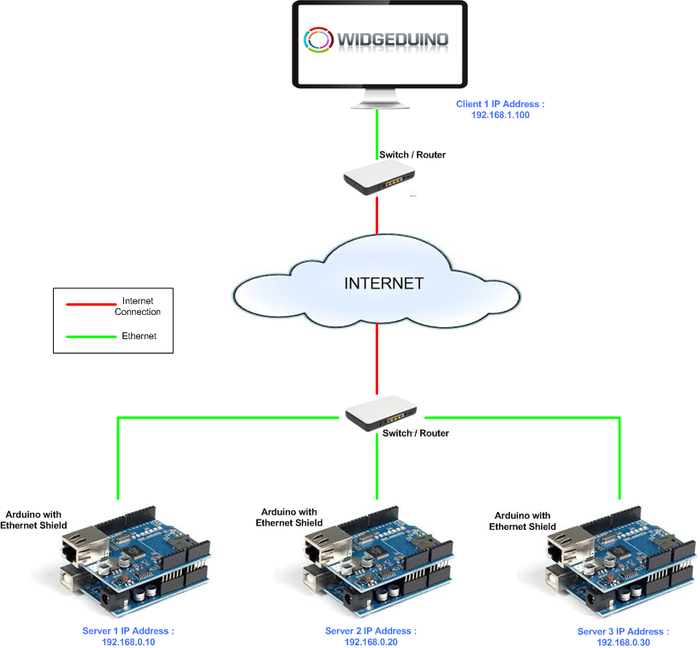 “Widgeduino comes with built-in APIs which facilitate addition of user-friendly widgets to embedded designs,” Nazir continued. “The libraries are primarily designed for communication with Arduino boards.”

“Widgeduino simplifies the process of prototyping as it has multiple widgets that are very valuable in testing a design concept,” Nazir added. 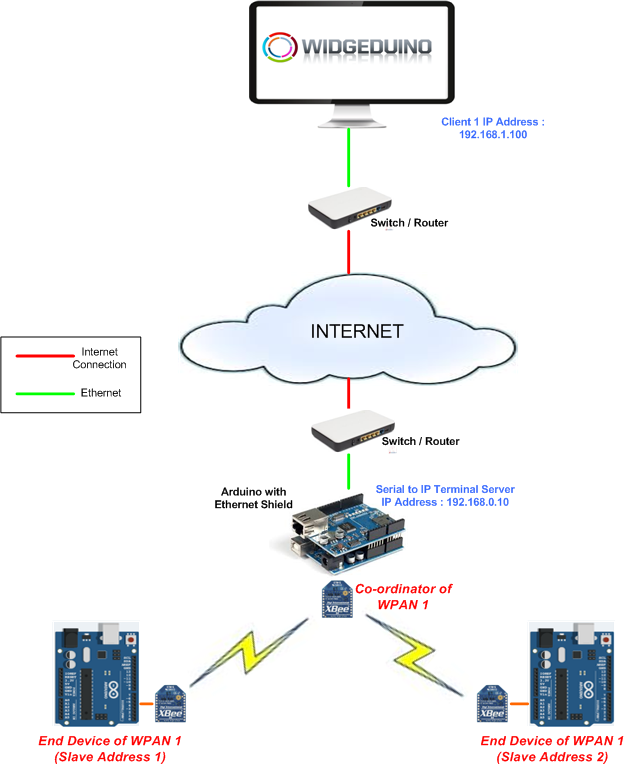 “Once you finished with prototyping and testing with Widgeduino, you can use these widgets in your real SCADA system designs. Widgeduino provides a simple serial or ethernet interface to your microcontroller based designs, with a particular focus on Arduino boards.” 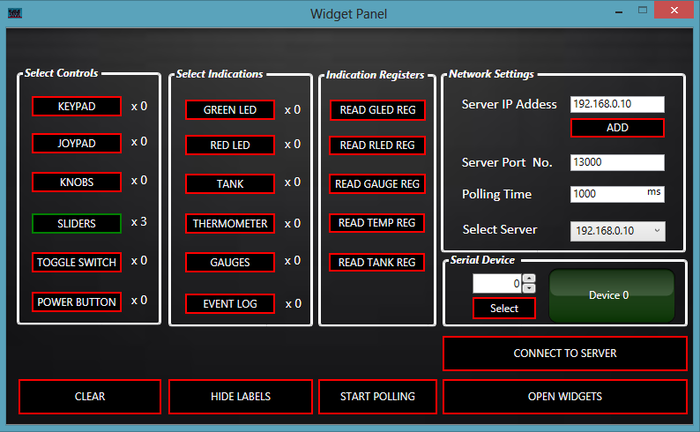 Interested in learning more? You can check out WidgeDuino’s official Kickstarter page here.

Designed by Dentella Luca, BlueMatrix can be controlled remotely via a PC, smartphone or tablet.

The modules are connected as follows:

“The Arduino Uno is the heart of the project, [as] it manages the display, checks the battery status and talks (using a simple protocol) with the controlling device (Windows application or Android app),” Luca explained in a recent blog post.

“The BlueMatrix is powered by a Li-po battery (1 cell). The battery’s state of charge is monitored by Lipo Fuel Gauge, which sends the actual SoC (State of Charge) value to Arduino via I2C bus. The Lipo Rider module rises the battery voltage to 5V to power all the other modules and allows it to recharge the battery using a simple, mini-USB power supply.”

Meanwhile, the HC-05 module is tasked with managing Bluetooth connectivity.

“After having established the connection with the remote device, it transparently transport the data received/transmitted by Arduino via serial connection,” said Luca.

On the software side, Luca developed two applications to control BlueMatrix: a .Net application (developed in C#) and an Android app.

“BlueMatrix was designed to be portable, therefore I suppose that it will be mostly controlled using a smartphone; this is the reason why the Android app is better designed than the desktop one and it’s also available on Google’s Play Store,” he added.

Interested in learning more? You can check out the official BlueMatrix project page here and download the Arduino sketch on GitHub here.

“Release 2.0 is endorsed by Arduino by being part of the Arduino At Heart program,” Schafer explained. “It also includes firmware enhancements that free up shield pins, adds a second hardware serial port and [offers] an in-circuit programmer, freeing up 512 bytes of sketch memory.”

“With over 300 I/O shields compatible with the arLCD covering every wireless, I/O, and protocol standard embedded systems, development is like building with blocks,” said Schafer. “Macros and GUI widgets allow users to build a user interface prototype fast – within hours, not days.”

“This is a full featured, ‘smart’ ezLCD GPU with the Arduino Uno (ATmega328) on the same PCB,” said Richard Obermeyer, Vice President of Engineering at EarthMake.  “The arLCD flash drive give users the ability to simply copy fonts and bitmaps to the arLCD from a PC via USB, [while] the Arduino IDE [facilitates] rapid product development with Windows, Linux and OSX operating systems.”

High-end barcode scanners are typically designed to read 1-D, 2-D, matrix or QR barcodes. Such devices must be capable of achieving high performance with low power sipping – as well as rapidly processing and decoding large amounts of data.

Atmel offers a number of versatile components that can be used as a platform for building a reliable high-end barcode scanner, including the SAMA5D31 Cortex-A5 based eMPU.

“There is also a Floating Point Unit (FPU) for accelerated image processing, integrated External Bus Interface (EBI) for DDR2/LPDDR2, along with support for up to 39 DMA channels (double buffering) to minimize CPU load and reduce real-time constraints. In addition, the SAMA5D31 boasts integrated serial peripherals – SPI, SDIO, I2C, USB and USARTS – for interfacing to communications modules, as well as an Image Sensor Interface (ISI) for direct connection to CCD modules.”

In terms of software, Atmel’s SAMA5D3 lineup supports a rather expansive development ecosystem, such as Linux 3.6.6, Windows and Android 4.0. Support for the above-mentioned operating systems include sources, pre-built demos with installation scripts, build instructions, as well as various tips and tricks.