Researchers at the University of Twente in the Netherlands have successfully adapted the precise art of origami down to the microscopic scale. Using only a drop of water, the scientists managed to fold flat sheets of silicon nitride into cubes, pyramids, half soccer-ball-shaped bowls and long triangular structures that resemble Toblerone chocolate bars. 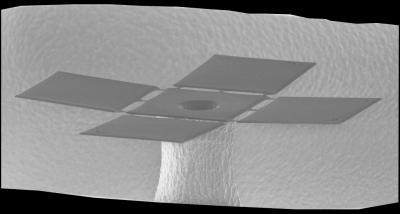 “While making 3D structures is natural in everyday life, it has always been extremely difficult to do so in microfabrication, especially if you want to build a large number of structures cheaply,” explained Antoine Legrain, a graduate student at the MESA+ Institute for Nanotechnology at the University of Twente.

To help solve the challenge of building in miniature, researchers adopted a self-assembly technique, in which natural forces such as magnetism or surface tension trigger a shape change.   As Legrain notes, self-assembly became a popular method in the 1990s to help cram even more computing power into shrinking electronic devices. Indeed, so-called solder assembly used the surface tension of melting solder to fold silicon, the electronic industry’s standard semiconductor material, into 3D shapes that more efficiently filled a small space with electrical components.

The University of Twente team also created silicon-based shapes, albeit with a more ubiquitous liquid – water – to activate and control the folding.

“Water is everywhere, is biocompatible, cheap, and easy to apply,” said Legrain. “Using water instead of solder also speeds up the folding of each individual structure. If the water-based process is further developed to fold multiple structures at once, it could become cheaper than current self-folding approaches.”

To create their three shapes, the researchers employed a custom software program to first design the flat starting pattern. They then “printed” the design onto silicon wafers, while hinges were inserted by etching away material just before depositing a thinner layer.

“Possible shapes are in principle limitless, as long as they can first be made on a flat surface,” Legrain pointed out. 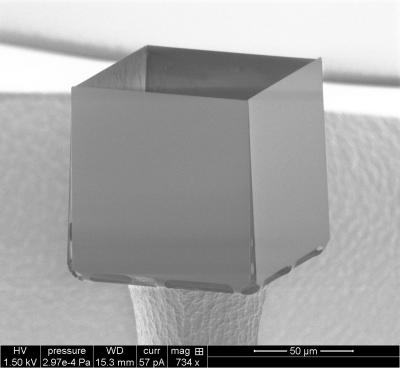 To fold the designs, the researchers pumped a small amount of water through a channel in the silicon wafer. The capillary forces created by water molecules sticking to each other and to the silicon puledl the flat surfaces together to form fully three-dimensional creations. The team also discovered that the final structures, which are approximately the size of a grain of sand, can be opened and closed up to 60 times without signs of wear, as long as they remain wet.

The ability to unfold and refold the structures could be useful in biomedical applications. For example, self-folding tools could deliver drugs exactly where they are needed in the body or grab a tiny amount of tissue for a micro-biopsy.

“Cleanroom fabrication at research level can be long, tricky and frustrating. It is a good feeling when we obtain such nice results out of it,” Legrain added.

For now, creating soccer ball and Toblerone shapes are fun ways for researchers to test their system and better understand its capabilities. In the future, the team hopes to design conductive hinges and create 3D sensors with their new technique.

The article “Controllable elastocapillary folding of three-dimensional micro-objects through-wafer filling” is authored by A. Legrain, T. G. Janson, J. W. Berenschot, L. Abelmann and N. R. Tas. It was published in the Journal of Applied Physics on June 3, 2014 (DOI: 10.1063/1.4878460) and can be read here.

Kevin Boyer and Phillip James have created a device that quite literally turns water into wine in just a few days using a low amount of heat and a specialized Atmel-based, Arduino-controlled environment.

“Initially we have sourced 6 wine types that The Miracle Machine and its smartphone app (iOS and Android) will help you make,” the duo explained on the project’s official website.

“These are a full-bodied Cabernet Sauvignon and rich Chardonnay from Napa Valley, a cool climate Pinot Noir from Oregon, an aged Tuscan blend from Italy, Sauvignon Blanc from Sonoma, and a delicate red and a steely white from Burgundy. We expect to add 5-10 more over the next 3 months.”

According to Boyer and James, customers will be able to buy the grape concentrate, yeast and the final sachet of ingredients once the product officially launches. Each kit will make a different type of wine, with the Miracle Machine team ultimately planning to roll out a low-cost ($10) monthly “wine” club kit.

So, how does the device work? Well,   as Phillip James told Wine-Searcher, at the heart of the miracle machine lies the fermentation chamber.

“Obviously we’re keeping the exact science under wraps, but we can tell you the chamber uses an array of electrical sensors, transducers, heaters and pumps to provide a controlled environment for the primary and, as needed, secondary fermentation stages. For example, while a digital refractometer measures the sugar content of the liquid during the fermentation process, a custom-designed ceramic air-diffuser pumps filtered air under a regulated micro-oxygenated environment, aerating the wine and thus softening the tannins,” James explained.

“Meanwhile an ultrasonic transducer, positioned directly underneath the chamber, resonates effectively speeding up the flavour development of the wine. Each of these components, and others, are connected to an Arduino microcontroller that ensures the Miracle Machine is doing its job of making a fine wine of your creation in just a matter of days.”

Boyer and James say they plan on launching a Kickstarter campaign in the near future. Bits & Pieces will keep you posted, but in the meantime, you can check out the official Miracle Machine website here and Yahoo’s (UK) write up of the product here.

Gas and water meters – deployed by utility companies to measure usage stats – are typically designed to display data on a small segment LCD screen. Unlike standard electricity meters, gas and water meters are usually battery-operated, so power efficiency is clearly a key requirement.

RF communication has also become a critical feature for gas and water meters due to the advent of AMI architecture – with the Smart Electricity Meter often acting as the gateway to a utility for meter reading. In addition, an increasing number of gas and water meters are tapping into home area networks, requiring optimized security to protect data communications between devices.

The microcontrollers used in gas and water meters are generally 8- or 16-bit MCUs with ultra-low power features, often with integrated LCD segment drive capability. As such, selecting Atmel’s extensive MCU portfolio to design water and gas meters offers engineers a number of advantages.

Analog-to-Digital Converters (ADC) and Digital-to-Analog (DAC) can also be useful peripherals to embed in the microcontroller, as they help facilitate flow measurement. Remember, flow meters are battery-powered, requiring power-efficient solutions capable of supporting up to 20 years of operation.

“Of course, LCD support is an important requirement. This capability can be driven serially with chip on glass, but must often be integrated into the microcontroller. Essential peripherals include serial communications and, frequently, security through encryption,” the engineering rep added.

“Dual clock input for high accuracy main clock (often used for timings in metrology) and second clock input for 32KHz for RTC. For Smart Meter and Smart Grid implementations, RF is the communication medium of choice to connect to the HAN to support AMR.”

Interested in learning more about using Atmel MCUs to design gas and water meters? Be sure to check out our extensive portfolio of MCUs that can be used to power such designs.