The MPU and MCU worlds are constantly converging and colliding, and the difference between them is not a mere on-off switch — it’s more of a sliding bar.

In February 2015, BMW reported that it patched the security flaw which could allow hackers to remotely unlock the doors of more than 2 million BMW, Mini and Rolls-Royce vehicles. Earlier, researchers at ADAC, a German motorist association, had demonstrated how they could intercept communications with BMW’s ConnectedDrive telematics service and unlock the doors.

BMW uses SIM card installed in the car to connect to a smartphone app over the Internet. Here, the ADAC researchers created a fake mobile network and tricked nearby cars into taking commands by reverse engineering the BMW’s telematics software.

The BMW hacking episode was a rude awakening for the connected car movement. The fact that prominent features like advanced driver assistance systems (ADAS) are all about safety and security is also a testament is that secure connectivity will be a prime consideration for the Internet of Cars.

Atmel is confident that it can establish secure connections for the vehicles by merging its security expertise with performance and low-power gains of ARM Cortex-M7 microcontrollers. The San Jose, California-based chip supplier claims to have launched the industry’s first auto-qualified M7-based MCUs with Ethernet AVB and media LB peripherals. In addition, this high-end MCU series for in-vehicle infotainment offers the CAN 2.0 and CAN flexible data rate controller for higher bandwidth requirements.

Nicolas Schieli, Automotive MCU Marketing Director at Atmel, acknowledges that security is something new in the automotive environment that needs to be tackled as cars become more connected. “Anything can connect to the controller area network (CAN) data links.”

Schieli notes that the Cotex-M7 has embedded enhanced security features within its architecture and scalability. On top of that, Atmel is using its years of expertise in Trusted Platform Modules and crypto memories to securely connect cars to the Internet, not to mention the on-chip SHA and AES crypto engines in SAM E70/V70/V71 microcontrollers for encryption of data streams. “These built-in security features accelerate authentication of both firmware and applications.” 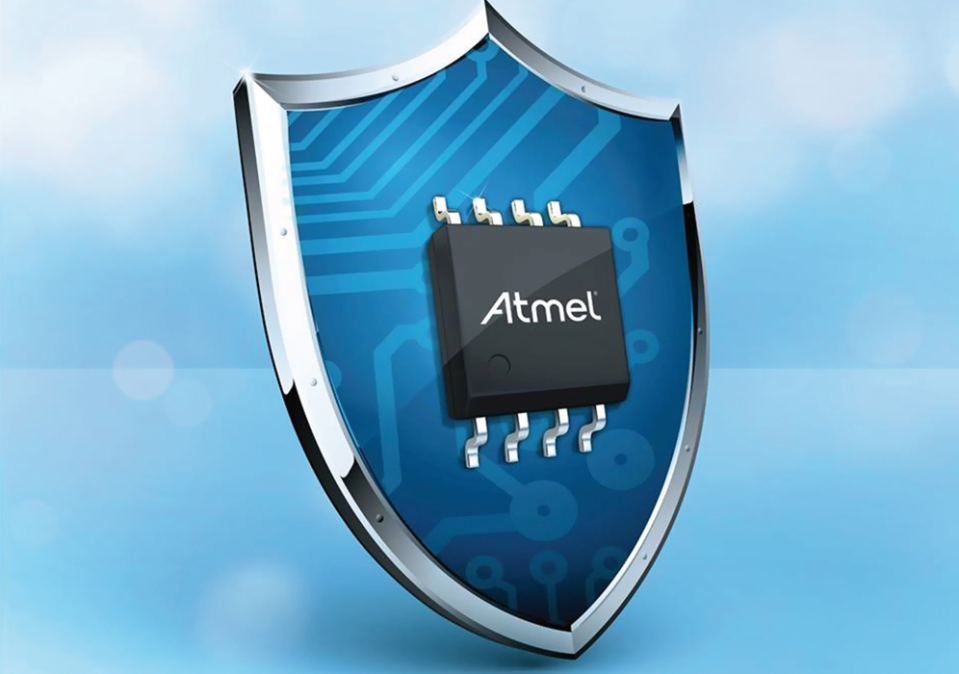 Schieli notes that the Cotex-M7 has embedded enhanced security features within its architecture and scalability. On top of that, Atmel is using its years of expertise in Trusted Platform Modules and crypto memories to securely connect cars to the Internet, not to mention the on-chip SHA and AES crypto engines in SAM E70/V70/V71 microcontrollers for encryption of data streams. “These built-in security features accelerate authentication of both firmware and applications.”

He explained how the access to the Flash, SRAM, core registers and internal peripherals is blocked to enable security. It’s done either through the SW-DP/JTAG-DP interface or the Fast Flash Programming Interface. The automotive-qualified SAM V70 and V71 microcontrollers support Ethernet AVB and Media LB standards, and they are targeted for in-vehicle infotainment connectivity, audio amplifiers, telematics and head control units companion devices.

The second major advantage that Atmel boasts in the connected car environment is software expertise and an ecosystem to support infotainment applications. For instance, a complete automotive Ethernet Audio Video Bridging (AVB) stack is being ported to the SAM V71 microcontrollers.

Next, the company offers support for several RTOS platforms like RTX, embOS, Thread-X, FreeRTOS and NuttX. Atmel also facilitates the software porting of any proprietary or commercial RTOS and middleware. Moreover, the MCU supplier from San Jose features support for specific automotive software such as AUTOSAR and Ethernet AVB stacks.

Atmel supports IDEs such as IAR or ARM MDK and Atmel Studio and it provides a full-featured board that covers all MCU series, including E70, V70 and V71 devices. And, a single board can cover all Atmel microcontrollers. Moreover, the MCU supplier provides Board Support Package for Xplained evaluation kit and easy porting to customer boards through board definition file (board.h).

Beyond that, Atmel is packing more functionality and software features into its M7 microcontrollers. Take SAM V71 devices, for example, which have three software-selectable low-power modes: sleep, wait and backup. In sleep mode, the processor is stopped while all other functions can be kept running. While in wait mode, all clocks and functions are stopped but some peripherals can be configured to wake up the system based on predefined conditions. In backup mode, RTT, RTC and wake-up logic are running. Furthermore, the microcontroller can meet the most stringent key-off requirements while retaining 1Kbyte of SRAM and wake-up on CAN.

Transition from MPU to MCU

Cortex-M7 is pushing the microcontroller performance in the realm of microprocessors. MPUs, which boast memory management unit and can run operating systems like Linux, eventually lead to higher memory costs. “Automakers and systems integrators are increasingly challenged in getting performance point breakthrough because they are running out of Flash capacity,” explained Schieli.

On the other hand, automotive OEMs are trying to squeeze costs in order to bring the connected car riches to non-luxury vehicles, and here M7 microcontrollers can help bring down costs and improve the simplification of car connectivity.

The M7 microcontrollers enable automotive embedded systems without the requirement of a Linux head and can target applications with high performance while running RTOS or bare metal implementation. In other words, M7 opens up avenues for automotive OEMs if they want to make a transition from MPU to MCU for cost benefits.

However, the MPU and MCU worlds are constantly converging and colliding, and the difference between them is not a mere on-off switch. It’s more of a sliding bar. Atmel, having worked on both sides of the fence, can help hardware developers to manage that sliding bar well. “Atmel is using M7 architecture to help bridge the gap between microprocessors and high-end MCUs,” Schieli concludes.

Majeed Ahmad is the author of books Smartphone: Mobile Revolution at the Crossroads of Communications, Computing and Consumer Electronics and The Next Web of 50 Billion Devices: Mobile Internet’s Past, Present and Future.