With his sights set on the world record, this Maker created a 3D-printed, remote-controlled car that can go over 100 mph.

Like most of us, James Beswick has a hobby. That interest pertains to the building and racing of remote-controlled cars. But we’re not talking about just any RC vehicle. In fact, the British Maker has designed and 3D-printed one that’s capable of achieving speeds over 100 mph. And while that may sound pretty darn fast to many, the world record for ground speed is actually 202.02 mph, a benchmark Beswick has set out to break. 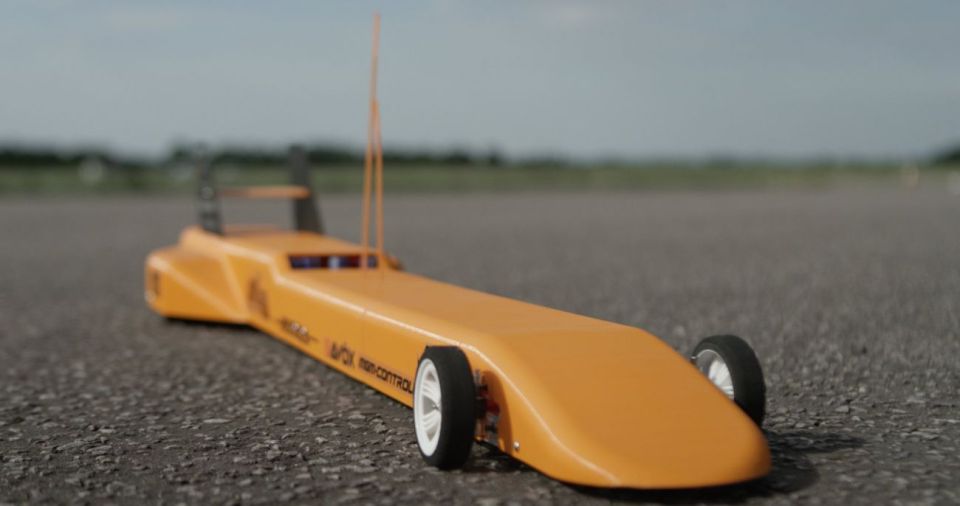 Thanks to 3D printing, the Maker says the entire construction process became much faster, easier and more efficient. Beswick employed the help of an Ultimaker 2 Extended, which he used to create the car’s four-foot-long body out of a PLA/PHA blend filament for shock absorption and robustness, as well as its rear wing, servo holders, controller mounts, battery and cable clamps, and absorbers for the electronics.

So why go with 3D printing? Not only did the Ultimaker’s build volume provide a printing surface suitable for the car’s dimensions, its open filament system allowed him to experiment with a combination of different materials for his design. According to Beswick, the technology enabled him to make the RC vehicle in more unique shapes, comprised of less pieces with less seams, which made it more aerodynamic.

“I’ve learnt through testing that stones at high speed versus PLA are a deadly mix, so in the next version of the body I’ll be printing I’ll be addressing a few weak spots,” he explains. “The current R/C world record has very recently been set at 202 miles per hour and I won’t be stopping with the development of my project until I can go faster.”

You can learn all about his story, the vehicle and the entire process in his recent interview Ultimaker below.

While you’ve probably seen countless robots before, we guarantee you that none have made you say “awwwww” quite like this one. That’s because Alonso Martinez, a character technical director at Pixar, has built a social bot that he calls Mira. Whereas other humanoids have been designed to automate tedious tasks and lend a helping hand with chores around the house, this egg-shaped unit has one job: to make life better one smile at a time.

Proving just that, Martinez recently posted a video of Mira playing peek-a-boo with humans. In terms of appearance, the robot is pretty basic — but in the best way possible. The somewhat spherical device is equipped with a pair of eyes, a color-changing base, and if you look close enough at an earlier video, it appears to be driven by an Arduino Uno (ATmega328).

Being a Pixar character director and all, it’s no wonder Mira was inspired by the simplicity of animated robots like Iron Giant and Big Hero 6’s Baymax. Martinez tells PSFK that he began designing the friendly toy with a pencil and paper before migrating to modeling software, and ultimately, 3D printing her parts on an Ultimaker.

The project was originally designed, in collaboration with fellow Makers Aaron Nathan and Vijay Sundaram, as a way to explore human-robot interactivity and emotional intelligence. Over time, she will be able to understand more about the world and feelings, improving her ability to engage with people in a much more meaningful manner.

For now, Mira uses facial tracking technology to play the game of peek-a-boo. She will get sad when a user hides, which in turn, causes her color will change to purple. Yet as soon they reappear, Mira will wiggle in excitement, let out a joyful sound and emit various colors. If you think about it, pretty much like a pet.

While Martinez has yet to reveal if he will bring this cute companion to consumers, it is evident by its rising popularity — already 200,000 views on YouTube — that there are plenty of people out there who’d love a Mira for themselves. (Us included.) Not to mention, she’d be a nice little stress-releiver to have on your desk at work or home. After all, who doesn’t love a game of peek-a-boo?!

As we await to find out more, you can stay connected here. In the meantime, watch Mira in action below.

Over the last 12 months, we’ve certainly seen a fair share of new 3D printers hit the market. While many of today’s printers range in terms of size, extruders, composition, materials and hardware, none may be as unique as the one recently created by Dutch Maker Harold Reedijk. 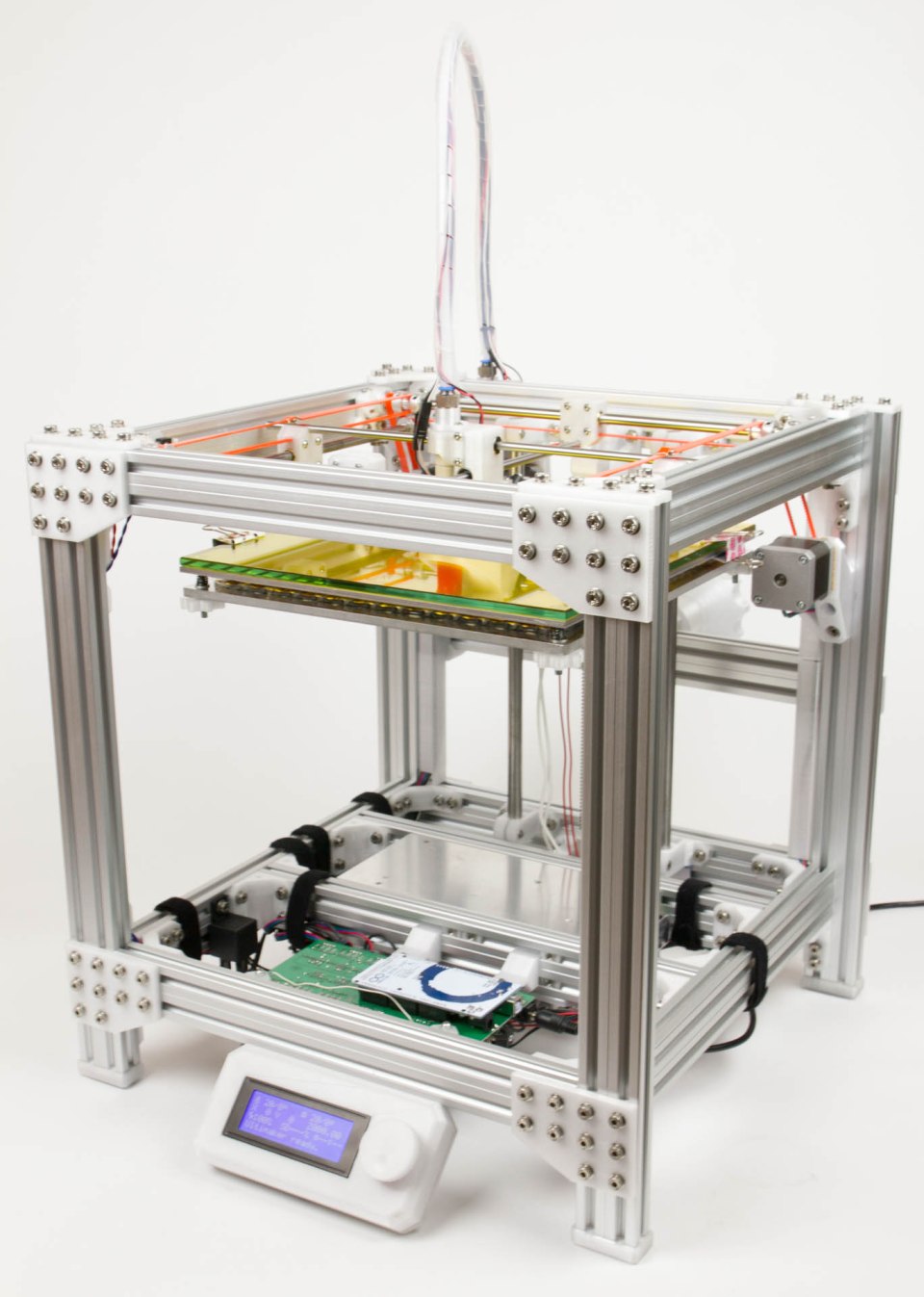 As 3DPrint.com notes, Makers have been constructing their own 3D printers using 3D-printed parts for a while now — a trend that is commonly seen throughout open-source RepRap movement. Meanwhile, we’ve also begun to see some manufacturers, like Lulzbot, begin to mass produce their own parts on 3D printers — a number of which are based on AVR and Atmel | SMART microcontrollers.

Reedijk, who has owned an Ultimaker Original 3D printer for quite some time now, is no stranger to tinkering around with his Arduino Mega 2560 (ATmega2560) based printer by adding and replacing various components. In fact, he’s even created his own heated print bed, as well as even more recently replaced the entire hot-end on his Ultimaker. 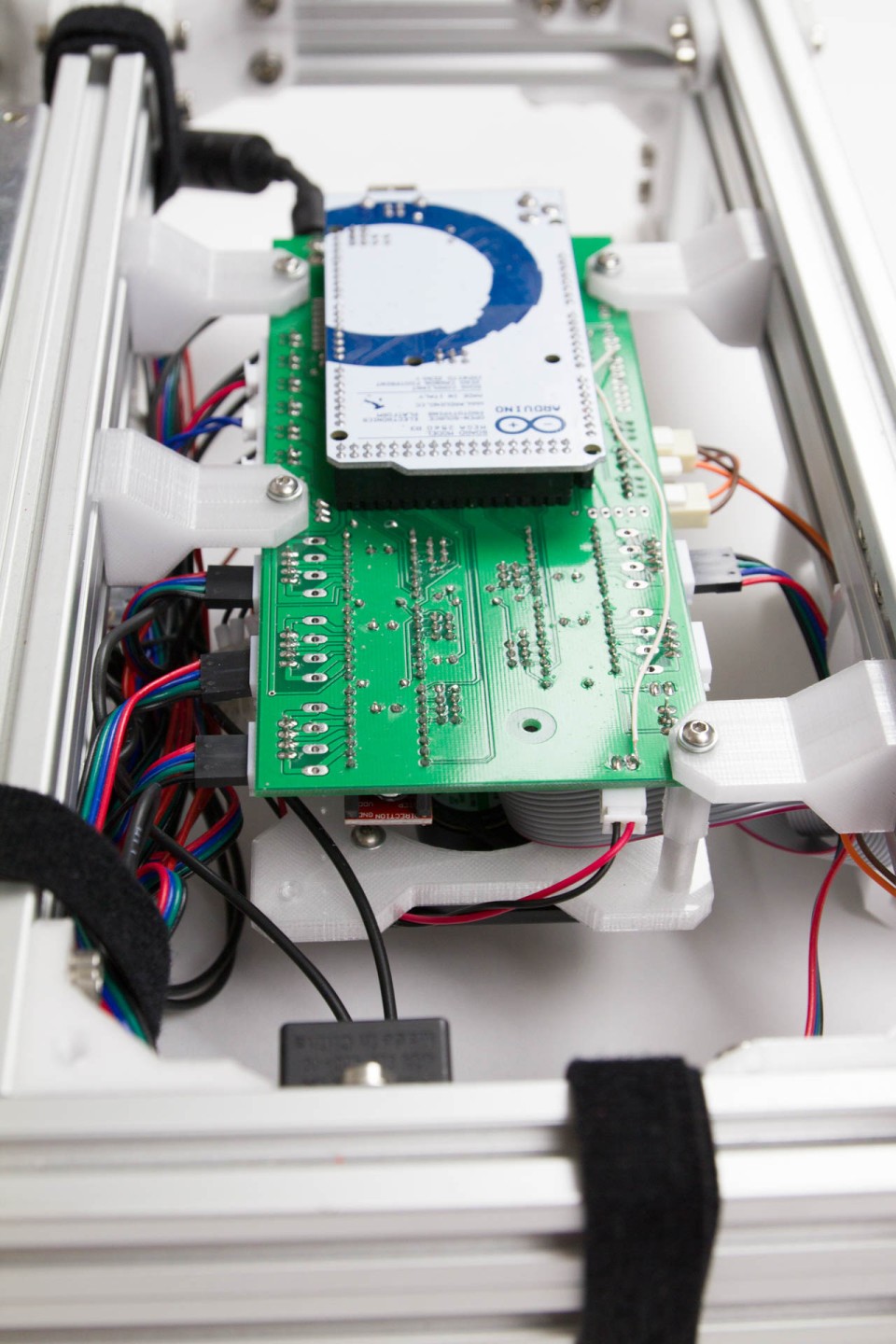 “After a while I asked myself whether I could make a printer on my own. I had access to aluminum extrusions, so I decided to use them for the frame. I didn’t want to make the printer entirely from aluminum parts, as it would be too expensive for my budget at that time, and I knew that RepRap printers used printed ABS parts for construction purposes. First I tried PLA. It was hard enough for construction but when there was pressure on the parts they just broke. I didn’t want to use ABS, just because of the bad fumes alone, so I searched for alternatives. At that time ColorFabb came out with XT. I bought a spool, printed some test parts to test the general strength, toughness and impact strength, and it exceeded my expectations,” Reedijk told 3DPrint.com.

Subsequently, the Maker elected to go ahead and use the ColorFabb XT to build his 3D printer, which was based on the design of his Ultimaker Original. He did make a few modifications, however, which included increasing its print volume to 220 x 220 x 215mm, adding a heated print bed, including an integrated power supply, and using a Ubis ceramic hot-end.

Reedijk revealed to 3DPrint.com that he drew the aluminum extrusions of the printer in his 3D Program around the print be dimensions before making the parts for the frame.

“After that I sourced all the parts, built up the printer, step by step, drew all the XT parts and printed them out. At that time, I thought I knew enough about 3D printing, but during the build process I learned a lot more about printing itself (temperatures, print orientations, effects of cooling, etc.), the material XT itself, and the do’s and don’ts when making a printer.”

When all was said and done, the DIY 3D printer looks (and yes, works) perfect. You can see it in action below!

Interested in learning more? While Reedijk’s future plans are still undecided, you can head over to his official website here.