This group of Makers built a 3D-printed, Arduino-compatible robot that can draw and write.

Dating back to the late 1940s, turtle robots have been employed for computer science and mechanical engineering training. These low to the ground gadgets were later perfected by Seymour Papert, co-inventor of the Logo educational programming language in the 1980s. Papert’s models had carried out assigned drawing functions using a small retractable pen set into or attached to the robot’s body. 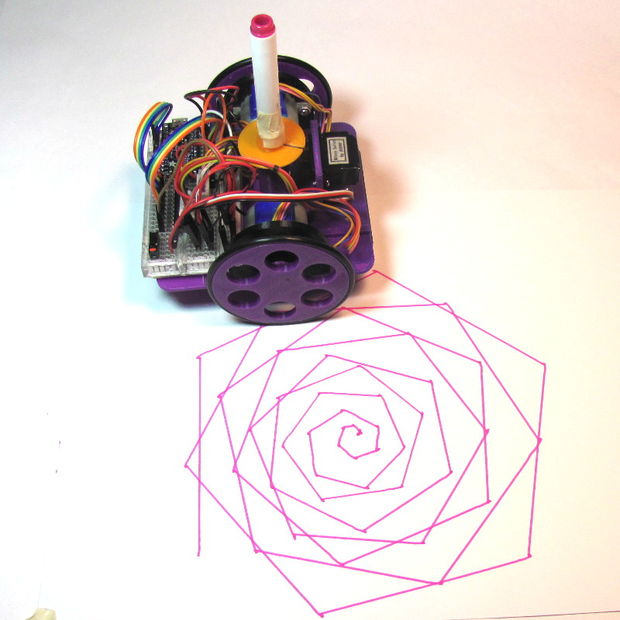 Well, the MakersBox crew decided to take this concept and apply it to a 3D-printed, Arduino-compatible doodling robot of their own, which was originally conceived as part of a recent 10-hour workshop for ChickTech.org. Their device, equipped with a pen in the center of its body not unlike its predecessors, works by wheeling around a sheet of paper as it simultaneously draws shapes.

The bot is based on an Adafruit Pro Trinket 3V (ATmega328), along with a pair of steppers, a driver, a micro servo and four AA batteries for power. The Makers also created eight different 3D-printed parts, which included the chassis, wheels, pen holder and stepper bracket.

The robot itself is programmed using a set of commands relating to its position on a piece of paper. The Trinket can be configured to move the robot backwards and forwards, rotate it in both directions, as well as raise and lower the pen so it’s not always drawing. Intrigued? Check out the Makers’ entire project here, or simply watch it in action below!