If there’s a single major stumbling block that is hindering the IoT take-off at the larger industrial scale, it’s security.

The intersection of data with intelligent machines is creating new possibilities in industrial automation, and this new frontier is now being increasingly known as the Industrial Internet of Things (IIoT). However, if there is a single major stumbling block that is hindering the IoT take-off at the larger industrial scale, it’s security.

It’s imperative to have reliable data in the industrial automation environment, and here, the additional security layers in the IoT hardware often lead to compromises in performance. Then, there is counterfeiting of products and application software, which is becoming a growing concern in the rapidly expanding IoT market.

Atmel’s answer to security concerns in the IIoT infrastructure: a microprocessor (MPU) that can deliver the security while maintaining the level of performance that Internet-connected systems require. The company’s Cortex A5 chip — the Atmel | SMART SAMA5D4 — securely stores and transfers data, as well as safeguards software assets to prevent cloning of IoT applications.

The SAMA5D4 series of MPUs enables on-the-fly encryption and decryption of software code from the external DRAM. Moreover, it boasts security features such as secure boot, tamper detection pins and safe erasure of security-critical data. The A5D4 processor also incorporates ARM’s system-wide security approach, TrustZone, which is used to secure peripherals such as memory and crypto blocks. TrustZone —comprising of security extensions that can be implemented in a number of ARM cores — is tightly integrated into ARM’s Cortex-A processors. It runs the processor in two different modes: First, a secure environment executes critical security and safety software, and secondly, a normal environment runs the rich OS software applications such as Linux. This lets embedded designers isolate critical software from OS software. 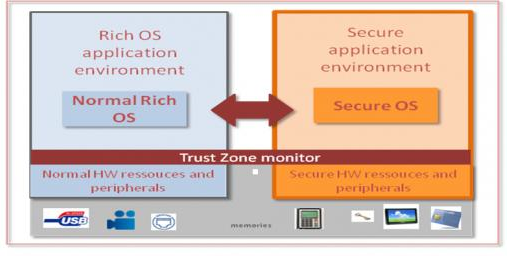 The Atmel SMART | SAMA5D4 processor is based on the Cortex-A5, the smallest and simplest of the Cortex-A series cores that support the 32-bit ARMv7 instruction set. It’s targeted at applications requiring high-precision computing and fast signal processing — that includes industrial and consumer applications such as control panels, communication gateways and imaging terminals.

The use cases for SAMA5D4 span from kiosks, vending machines and barcode scanners, to smart grid, communications gateways and control panels for security, home automation, thermostats, etc. Atmel’s MPU features peripherals for connectivity and user interface applications. For instance, it offers a TFT LCD controller for human-machine interface (HMI) and control panel applications and a dual Ethernet MAC for networking and gateway solutions.

A Quick Overview of the SAMA5D4

The SAMA5D4 processor, which got a 14 percent performance boost from its predecessor MPU, increasing operating speed to 528 MHz, is a testament of the changing microprocessor market in the IoT arena. Atmel’s microprocessor for IoT markets delivers 840 DMIPS that can facilitate imaging-centric applications hungry for processing power. Aside from that, the SAMA5D4 is equipped with a 32-bit wide DDR controller running up to 176 MHz, which can deliver up to 1408MB/s of bandwidth. That’s a critical element for high-speed peripherals common in the industrial environments where microprocessors are required to process large amounts of data.

The SoC-specific hardware security and embedded vision capabilities are a stark reminder of specific requirements of different facets of IoT, in this case, industrial and consumers markets. And Atmel’s specific focus on security and rich media just shows how the semiconductor industry is getting around the key IoT stumbling blocks.

Majeed Ahmad is the author of books Smartphone: Mobile Revolution at the Crossroads of Communications, Computing and Consumer Electronics and The Next Web of 50 Billion Devices: Mobile Internet’s Past, Present and Future.