“We started with a piece of Veroboard, an Atmel chip and a block of SRAM.”

When you think of DIY electronics, two boards in particular always seem to pop into mind. While there’s no shortage of ways to control and power your projects, Arduino and Raspberry Pi are undoubtedly the clear favorites to likely found at the core of most self-made gadgets. Keep in mind, both devices clearly have various uses and advantages. For starters, RPi is a fully functional barebones computer, whereas Arduino is simply a microcontroller. Despite their differences, however, they both share one thing in common: Atmel was there in the beginning, long before millions of these units were ever sold.

While we’ve previously highlighted some of the earliest Arduinos, did you know that Eben Upon actually began devising the Raspberry Pi with a piece of Veroboard, a block of SRAM, and yes, an Atmel chip? (Shoutout to the good ol’ STK500 eval kit!) A while back, the creator of the $45 PC demonstrated how he built one of his homemade prototypes nearly 10 years ago today, prior to giving up on DIP, through-hole components and the stripboard.

This model, which we’ll call the “2006 Edition,” was built around the mighty ATmega644 clocked at 22.1MHz with 512K of SRAM for data and framebuffer storage. 19 of the MCU’s 32 GPIO lines were used to drive the SRAM address bus. Clearly, one noticeable disparity is that the decade-old RPi lacks some of the power of its more modern counterpart. However, that is not to say this early design wasn’t impressive, it was capable of outputting a resolution of 320 x 240 and could render very simple 3D graphics. 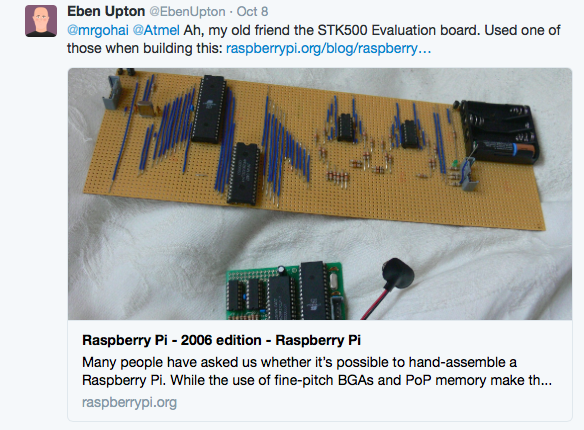 “To generate a 320×240 component video signal, the Atmel rapidly increments the address, and the data lines are fed via 74HC-series buffers to a trio of simple summing-point DACs; during horizontal and vertical blanking, it is free to perform other operations,” Upton explains. (You can see it in action in Upton’s throwback video below.)

Want to spark some RPi nostalgia and create your very own 2006 replica? Upton has made the schematics and PCB layout available for download here.