While dipping a chicken nugget into sauce or touching sushi may not be the most conventional way to create music, if there is one thing that MaKey MaKey has taught us, is that nearly anything can be transformed into a MIDI trigger. This includes the tops of cats’ heads, plastic mannequin parts, cacti, rubber finger monsters, and old-school Polaroid cameras, as demonstrated by musician Mark Redito (also known as Spazzkid). 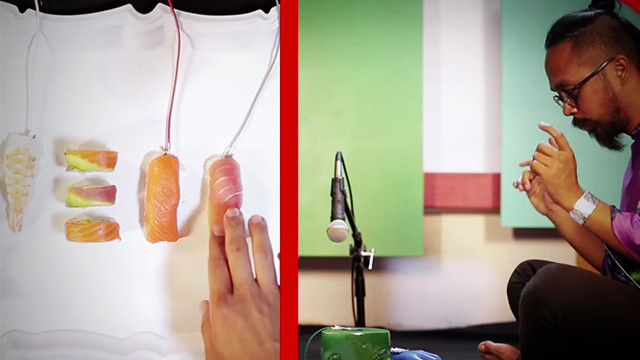 As you likely know, MaKey MaKey is a printed circuit complete with an ATmega32U4 MCU running on an Arduino Leonardo bootloader. Originally designed by the folks at MIT Media Lab, the kit has since become an immediate sensation throughout the Maker community. From playing Mario on Play-Doh or the piano on bananas, the possibilities are truly endless once you affix the alligator clip to the musical object of choice and rock out.

While one would assume that jamming away on some raw fish or dunking a piece of chicken into sweet ’n sour sauce may not produce the most desirable sounds, this performance is anything but. Redito’s performance is testament to the fact that playing tunes on ordinary objects doesn’t need to sacrifice quality. Listen for yourself below!

Hey McDonald’s, do we sense a future commercial? Because we’re surely lovin’ it! If you liked this creation, be sure to check out some other MaKey MaKey creations like this magnificent monome.