September 14th not only marked the first regular season home game for the San Francisco 49ers, but ushered in a new era of smart, constantly-connected sports stadiums as well. 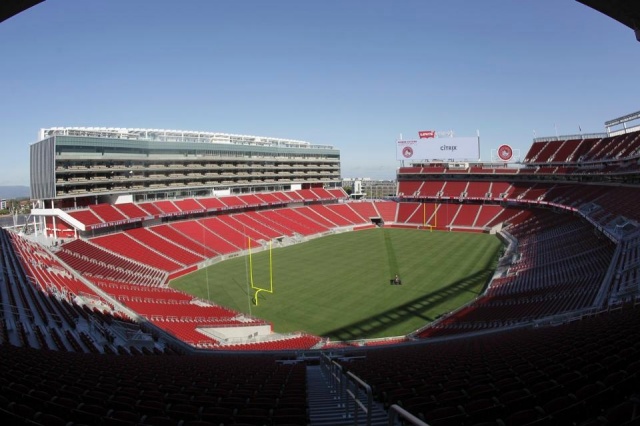 Located just minutes down the road from Atmel headquarters in Santa Clara, California, Levi’s Stadium is the brand-spanking-new home to the Bay Area’s beloved NFL team. Built at a cost of more than $1.2 billion, the recently-opened venue boasts a number of high-tech that would make any geek cheer. For starters, there are 680 free Wi-Fi access points distributed around the stadium (which is nearly one access point for every hundred fans) as well as 12,000 Ethernet ports, all supported by a supersonic 40-Gbps fiber optic connection that delivers broadband speeds 40 times faster than any other stadium.

According to TIME Magazine, this is all possible due to nearly 400 miles of cabling running throughout the structure. In addition, there are almost 1,200 Wi-Fi antennas located throughout the outdoor arena that boost the wireless signal every 100 seats or so. Another cutting-edge feature of the stadium is a collection of about 1,700 beacons, which can be used to know the whereabouts of spectators and provide them with useful, targeted information.

In a recent Broncos pre-season game, the new stadium had 20,000 concurrrent Wi-Fi users, with a peak data usage of over 2 gigabits a second. For three hours, the average was above 1 gigabit per second in terms of usage, VentureBeat reports. 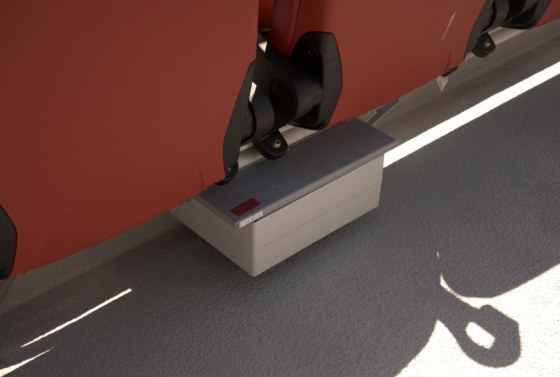 Much like the debut of the Botlr robot, the location of Levi’s Stadium deep within Silicon Valley likely helps enhance the building’s tech credentials. According to TIME, Sony has been a major contributor to the new stadium, contributing over 2,000 TVs, including 70 high-tech 4K units. Some of these flashier features will be obvious to fans, including the two giant scoreboards and 108-inch screen in one of the stadium’s restaurants. However, much of the technology will be hidden from view in a state-of-the-art computer network that would make many a tech startup jealous.

“This is truly a one-of-a-kind fan experience, with the world’s greatest showcase of 4K technology from the best of Sony’s professional and consumer products. For every event, every fan will be immersed in the pinnacle of entertainment and technology to enhance their experience,” Sony COO Mike Fasulo explains. 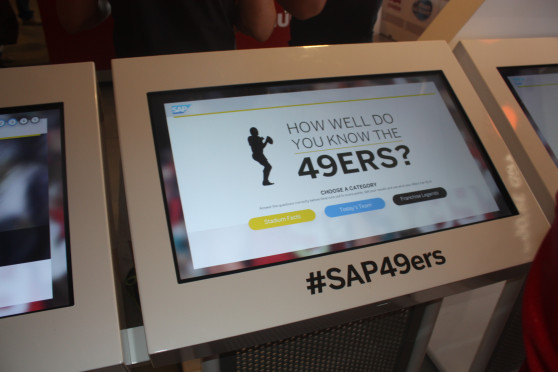 Additionally, SAP has sponsored a bunch of touchscreen kiosks throughout the venue where fans can partake in 49ers trivia. Using club data housed within the SAP database, fans can tap into three categories (stadium facts, franchise legends and current team) to see how well their team IQ stacks up against other die-hards.

Befitting of a team deep in the heart of Silicon Valley, a true catalyst to changing the stadium experience for the average fan will be the stadium’s smartphone app. The app will allow fans to order food from their seat, which can either be delivered or picked up at an express area. It can provide a live telecast of the game along with up to four on-screen replays and live statistics. Most importantly, it can point you in the direction of the bathroom with the shortest line so that you don’t miss out on any of the action.

“When we talk about tech, we never want to take away from the hero feature, the 11 guys down on the field,” said Al Guido, COO of the 49ers. “Tech has to be ancillary to what is happening on the field. We didn’t want people staring at their phones and not making noise. We need a home field advantage. What we can do is build the infrastructure and tech to enhance the experience.” 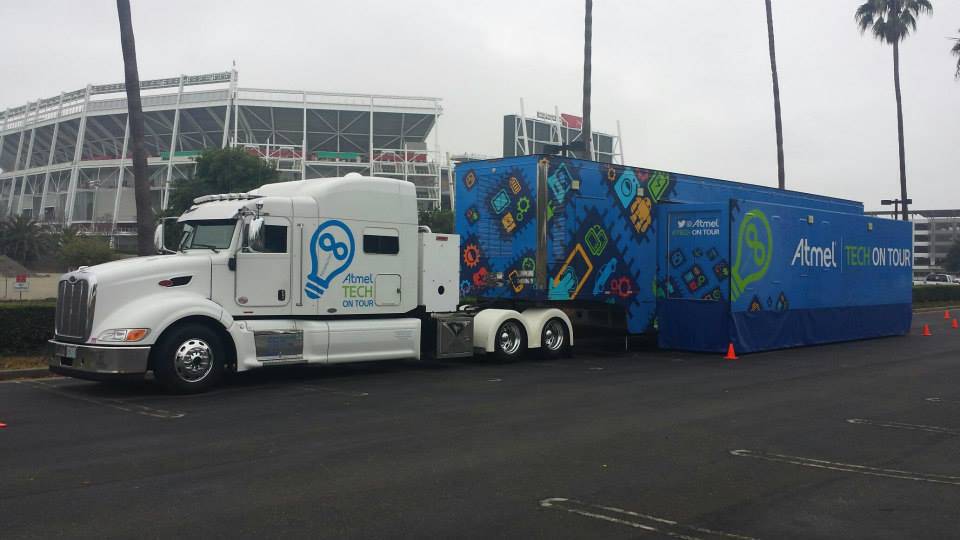 Earlier this year during DesignCon, our Tech on Tour mobile trailer made a special stop outside of the 49ers ‘smart home.’

A new era of smart stadiums is just dawning, but as fans begin to utilize the new technology and connect during games, there will certainly be new trends and capabilities that develop. As the Internet of Things continues to emerge, it is without question that connected technologies will make the live sporting experience even more enjoyable.

In correlation with these stadiums becoming smarter and more connected, interactive audience participation apps are being increasingly adopted for live, in-stadium events. Because stadiums have built out robust networks to connect their audience, developers have the opportunity to build applications to enable audience members to engage and interact with the game and one another.

According to PubNub, real-time technology has become the stimulus for interactive audience participation apps, enabling developers to deliver data in real-time, whether it be chat messages, statistics, polls, or advertisements. Real-time data streams in a connected stadium is changing the way we view live events. And, with the PubNub Data Stream Network, you can send and receive messages in under a 1/4 second, while adding a plethora of other real-time features to your in-stadium application.

According to CCS Insight, 22 million wearable devices will be shipped in 2014 — more than double last year’s 9.7 million total. The latest report projects that over 250 million smart wearables will be in use by 2018, nearly 14 times more than in 2013.

“The wearables market is in its Stone Age right now. There needs to be huge improvements to broaden their appeal,” explains Marina Koytcheva, Director of Forecasting at CCS Insight.

The forecast predicts that wrist-worn devices will account for 87% of wearables to be shipped in 2018 — comprising 68 million smartwatches and 50 million smart bands with no screen or with a minimal, one-line display. Fitness and well-being trackers remain the fastest-growing category, given that they have a clearly defined purpose, user benefits and are relatively affordable. CSS Insight believes fitness trackers will account for over half of the 35 million wearables in use at the end of this year.

“Wearables are poised to be the perfect gift for the person who has everything this Christmas. We believe this will fuel strong growth in the final quarter of 2014 for smart bands, particularly fitness trackers, which will account for more than half of the 35 million wearables in use at end of 2014,” Koytcheva adds.

According to the report, CCS Insight also foresees strong future growth in smartwatches. The company expects many smart band manufacturers to extend their product ranges by adding devices with screens. As smartwatches broaden their appeal, capabilities are refined, new functions are added and prices fall, CCS Insight expects smartwatches to displace fitness bands and become the most used form of wearables.

A smart wearable category that will become much more prominent in the second half of 2014, CSS reveals, is stand-alone cellular wearables. “We expect a number of high-profile devices with their own SIM cards will be announced in the coming months. However, these devices will face significant challenges as people are reluctant to take out another contract with their mobile operator.”

North America currently leads the way in terms of adoption of wearables with 5.2 million wearables sold in  2013, and over 40% of all wearable devices currently in use are there. Reason being that a majority of companies are based in North America, while the region possesses a proven eager to adopt new technology. Western Europe is catching up and from 2016 is expected to buy more wearables than North America, the analysts predicted. Adoption will be slower in emerging markets and primarily driven by tech-savvy, affluent users.

“The market is still in a chaotic stage of development, and there’s still a huge amount of uncertainty. Every category faces different risks: the way people use wearables is still changing, one type of device could kill sales in another category, people are unsure whether some wearables are socially acceptable, and intellectual property rights are a minefield for the dozens of start-ups entering the wearables market,” Koytcheva points out.

To learn more, you can access the entire report here or view the detailed infographic from the research firm below.