Let’s give this project a round of applause!

Guess who’s back with another robotic solution to yet another problem. Simone Giertz, of course! Any of us who’ve ever had to sit through a graduation ceremony, an hour-long presentation, a tennis match, a ballet recital or a political debate know all too well how annoying having to constantly give an applause can be. So, as part of her aptly named “There Must Be A Better Way” series, the frequent YouTuber and Maker has developed an automated applause machine. Why? Because “clapping your own hands is tiresome and a cruel practice.”

For the mechanism itself, Giertz employed a pair of kitchen tongs and attached a metal spring below the grippers, then put an oval-shaped DC motor between the two arms. This way, when the motor spins, it forces the tongs to open and close, creating a clapping motion.

“For the machine’s hands, I wanted to find a pair that would create the most realistic clapping sound possible. So I bought four different types of plastic hands from a party-supply store. After some experimentation, I decided that hollow hands made of rigid plastic created the best noise. I fastened them to the tongs’ grippers with small bolts,” the Maker explains.

The machine was brought to life using no other than an Arduino Uno (ATmega328) connected to a MOSFET, housed inside a laser-cut base. What’s more, a slider was added to the front of the device to control the speed. According to Giertz, she can now gradually adjust the applause from a “snarky slow clap” to a “breakneck 330 claps per minute.”

Admittedly, this may be one of her best, most practical and well-polished projects yet. We love it! Now how ‘bout a round of applause for Giertz?! You can watch the future of clapping hands below, as well as read her recent write-up in Popular Science here.

A robotic arm can wake Simone Giertz up, brush her teeth, feed her breakfast, and now, it can even put on her lipstick before a night on the town… well, sort of.

In an experiment that was simply an “afternoon impulse,” the Swedish YouTuber and tech enthusiast decided to program her infamous uArm and give it a tube of red lipstick. The ATmega328-powered robotic device then proceeded to apply the makeup, regardless of where it thought Giertz’s mouth was. The results were, as expected, not so pretty.

Simone Giertz is back — this time with a machine that can chop broccoli, lettuce, tomatoes, carrots, zucchini, cucumbers and just about anything.

Already equipped with several quirky machines that take care of most of her morning routine (from getting out of bed to brushing her teeth to feeding her breakfast), the innovative and always hilarious Simone Giertz has taken her ingenuity to the next part of the day: lunch.

That’s because the Maker, who happens to be a lifelong vegetarian, has developed a terrifyingly awesome Chopping Machine. And like her other inventions, the gadget was designed to automate a particular task that would otherwise require spending time and effort.

Why, you ask? “Because I’m lazy (?),” Giertz says. “I’ve spent a significant amount of time chopping, mincing and dicing all varieties of vegetables. Eating healthy is boring enough in itself, why does preparing healthy food have to be such a tedium?”

The Chopping Machine is exactly what it sounds like: a mechanism that can literally chop veggies. It consists of an Actobotics system, two knives and a pair of servo motors, all driven by an Arduino Nano (ATmega328).

The device itself is relatively simple, yet pretty dangerous nevertheless. (Translation: don’t try this at home!) Two servo motors lift the knife up and a spring at the bottom pulls it right back down. With it, Giertz can now slice broccoli, lettuce, tomatoes, carrots, zucchini, cucumbers and pretty much anything else… even the board itself.

Intrigued? Terrified? Fascinated? See it for yourself below!

Always seem to hit the snooze button? Well, this alarm will hit you instead.

A teeth cleaning helmet, check. A breakfast feeding robot, check. So what’s the next morning routine Simone Giertz has set out to automate, you ask? Getting you out of bed. Let’s face it, there’s nothing worse than waking up from a sound slumber. How many times have you hit the snooze button or dismissed an alarm only to shoot up hours later and realize that you accidentally slept in? To help avoid situations like these, the always innovative (and hilarious) Maker decided to build an alarm mechanism that literally slaps you in the face with a rubber arm to jumpstart your day.

In order to accomplish this, Giertz picked apart an ordinary alarm clock, wired it to an Arduino Uno (ATmega328), and controlled a 165rpm brushless DC motor through a relay. 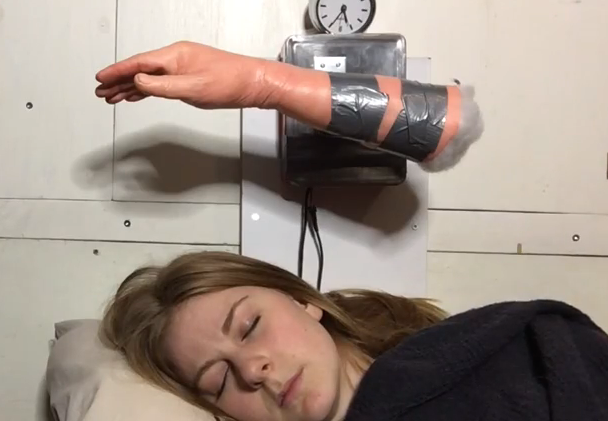 Those wishing to get into more detail will be happy to learn that she has provided an elaborate overview of the project in the first video below, and followed it up with a demonstration of the system. Don’t feel like being slapped in the face? You can always get ejected out of bed instead… just sayin’.