Who could ever forget Simon, the electronic game of memory skill that became an iconic pop culture fixture of the ‘70s and ‘80s? Through the years, however, the game can go from enjoyable to annoying incredibly fast. As a result, a Hackster.io user by the name of Magic Smoke decided trick out one of his children’s plastic farm toys with an MCU brain to play the game of Simon.

“One of the marvels of parenthood is the sheer volume of noisy plastic junk that gets thrown your kids’ way. It makes tremendous hacking fodder. For a while I had been watching to see if either of my daughters still expressed any interest in this moo-ing, oinking, polyethylene monstrosity. When the moment was right I grabbed it for re-purposing,” the Maker writes.

In order to bring his idea to life, Magic Smoke selected an Atmel ATtiny2313 to serve as the brains as it “had plenty of I/O pins so that no multiplexing would be necessary.” The code would also easily fit in the tinyAVR’s 2K of flash memory, while the 256 bytes of RAM could store enough moves for “the most elephantine of memories.”

Meanwhile, each stall was fitted with ultra-bright LEDs to help a user follow along. See it in action below!

Do you have a child’s game you’d love to hack? Access the entire step-by-step build from our friends at Hackster.io here.

Long before the days of the iPhone and Android came Simon, the device that started it all. The world’s first smartphone turned 20 this week, and to commemorate the occasion, TIME Magazine compiled several fun facts on the handset that broke the mold. Simon anticipated our constantly-connected, app-happy lives by cramming the features of a cellphone, pager, fax machine and computer all into an 18-ounce device.

1. IBM and BellSouth first debuted Simon on November 23, 1992 at the COMDEX Convention in Las Vegas, but it wasn’t made available to consumers until August 16, 1994.

2. It was expensive, and rightfully so. The device that set the pace for future smartphones was available only in the United States, and initially set buyers back $899.

3. Alright, so it was a brick. The clunky phone itself measured 8 inches long by 2.5 inches wide by 1.5 inches thick, all while weighing over a pound.

4. Yes, it had a touchscreen. Though touchscreens weren’t exactly non-existent back in the early 1990s, they weren’t super ubiquitous either. The IBM device replaced the usual telephone keyboard by a sensitive touchscreen and integrated PIM applications and data communication features along with a stylus, too. The phone provided an onscreen keyboard or a QWERTY keyboard and an optional memory card. 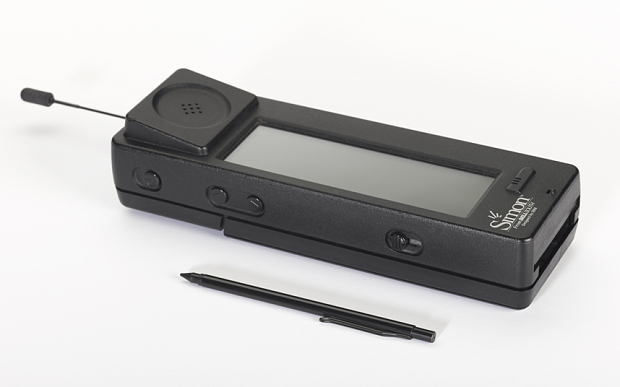 5. The world’s first all-in-one smartphone allowed users to make and receive telephone calls, faxes, emails and cellular pages, among other functions. Though there may not have been an app store at the time, the phone did come preloaded with apps such as an address book, calculator, calendar, note pad, sketch pad, time and to-do lists.

6. The first autocorrect? Alright, so the feature was called “PredictaKey” at the time. Nevertheless, Simon always showed the six most-likely letters that the user needed, depending on the characters they just typed.

7. Simon even made an appearance in The Net.

8. It could be plugged into a regular wall jack, because let’s face it, cellular service was still spotty and expensive back in the mid-1990s.

9. RIP, Simon. August 1994 – February 1995. The revolutionary handset spent only six months on the market with around 50,000 units sold, primarily to business people. According to Wikipedia, the majority of the Assembly language for the game was written by Dr. Charles Kapps, who taught computer science at Temple University.

Recently, a Maker named Ben North and his 7-year-old daughter designed a Simon-playing robot that is capable of beating the classic game.

As HackADay’s Brian Benchoff reports, North uses a key chain version of the game that is much smaller and easier to work with in terms of automatically sensing lights and pushing buttons.

“The arms are made from LEGO bricks, held up with rubber bands and actuated with two servos mounted on a polycarbonate cutting board,” he explained.

“To detect Simon’s lights, Ben connected four phototransistors to an Arduino Duemilanove (Atmel ATmega328 MCU). The Arduino records the pattern of lights on the Simon and activates the Lego arms in response to that pattern.”

As North notes, the Simon-playing robot, while fully functional, does have a number of limitations.

“This is not an industrial-strength robot. It’s quite fussy about ambient light, even with the calibration. This explains the slightly grainy videos, as they had to be shot without proper lighting,” he added.

“Once or twice, the finger-pulling elastic bands slipped, meaning a finger didn’t completely press its button and the game was lost. Also, I think the robot would have been better with some flashing lights.”

We think the robot is impressive, nevertheless!

Interested in learning more about the Simon-playing robot? You can check out the project’s official page here.