Barobot – powered by Atmel’s ATmega328 and ATmega8 microcontrollers – is an open source device that pours cocktails by mixing alcohol, soft drinks and sodas. It holds up to 12 bottles, and, according to its creators, is capable of pouring a drink with military accuracy.

In addition, Barobot features over 1,000 cocktail recipes, allowing users to create new ones on the fly. All can be easily accessed via a custom coded app on a tablet touchscreen or smartphone.

“Barobots frame – made of either deep black or transparent acrylic glass, comes in either a self assembly kit or an assembled ‘plug and pour’ version,” a Barobot rep explained in its recent Kickstarter post. 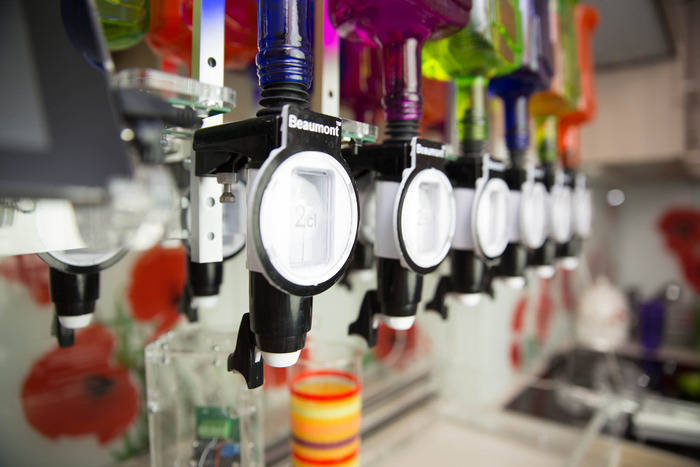 “The flat-pack self assembly kit requires no advanced skills or tools (it’s great fun to put together by itself!). Barobot is also illuminated with over 100 individually controlled LEDs that might be set to a number of light-themes or even synchronized to music.”

On the hardware side, both the carriage board and main board are based on Atmel’s popular ATmega328 MCU. The chips are tasked with collecting and relaying information from sensors as well as giving commands to actuators (motor and servos).   Meanwhile, the other 12 boards are known as “u-panels” and powered by tiny ATmega8 MCUs. Their primary purpose? Operating 96 LEDs on top of the robot (for bottle and Barobot interior illumination).

“All the PCBs communicate via I2C and ISP protocols in a distributed manner. One of the advantages of this setup is that all those independently operated LEDs that can illuminate the frame and individual bottles in a myriad of different ways,” the rep added. 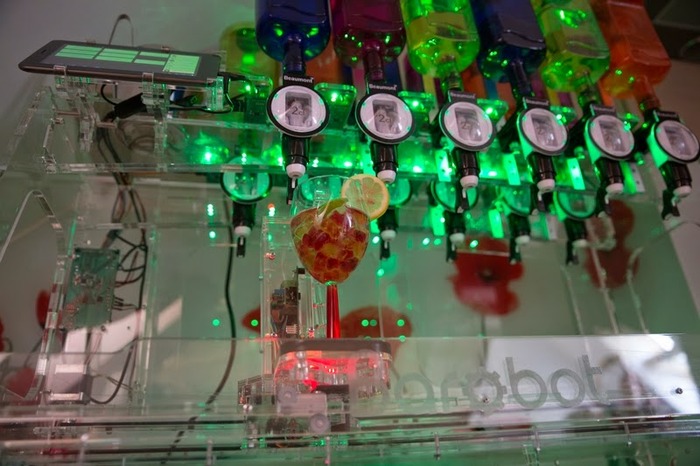 In terms of software, the PCBs run in Arduino C++ code. 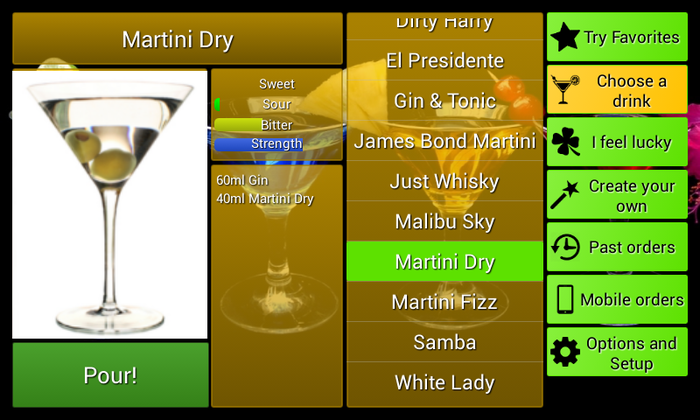 A gyroscope is a device for measuring or maintaining orientation, based on the principles of angular momentum. According to Wikipedia, mechanical gyroscopes typically comprise a spinning wheel or disc in which the axle is free to assume any orientation.

Although MEMS-based gyroscopes are obviously readily available these days, a Maker by the name of Jim decided to keep things old school for his classic gyro-stabilized two wheeler.

“Along the way he’s learned a few important secrets about mechanical gyro design, such as balancing the motor and gyro assembly to be just a bit top-heavy,” Fabio explained.

“[His] gyro is a stack of CDs directly mounted to the shaft of a brushed speed400 R/C airplane motor. The motor spins the CDs up at breakneck speed – literally. Jim mentions that they’ve exploded during some of his early experiments.”

As expected, the gyroscope can move in the fore-aft direction, with side-to-side balancing facilitated by curved tread wheels. Meanwhile, a potentiometer measures the tilt angle of the gyro, as the voltage from the pot is fed into an [Atmel-based] Arduino Uno (ATmega328 MCU) tasked with closing the loop by moving a servo mounted counterweight.

The vehicle is controlled via a typical R/C plane radio, with a servo steering the front wheel and another DC motor pulling rear wheel duty.

“Not only is [Jim’s] creation able to balance on its own, it can even make a U-Turn within a hallway,” Fabio added.

Oktopod Studio is an open source development platform for mechatronics, robotics and automation.

“We designed Oktopod Studio to be as user friendly as possible, [as it] features plug-and-play analog outputs, digital inputs, DC and Servo motor drivers [as well as a] graphical user interface for PC and Andriod devices,” an Oktopod rep explained.

“You don’t need to be a programmer or an electronic expert to use Oktopod Studio and make your own robotic projects.”

The Oktopod platform consists of two primary components linked via Bluetooth or USB:

The Oktopod Board offers Makers a Programmable Logic Controller (PLC), along with plug and play inputs and outputs for connecting a wide range of low voltage electronic devices, including LED lights, DC/servo motors, buzzers, electromagnets, switches, as well as photo-, thermo- and magnetic sensors.

Aside from Atmel’s ATmega16 MCU, key hardware specs include:

In terms of software, the Oktopod Control app (PC and Android) allows Makers to assume manual control of the hardware via sliders and buttons.

Meanwhile, the board is programmed by creating a so-called “wishList” of output operations using an intuitive virtual dashboard.

Interested in learning more about the ATmega16-powered Oktopod? You can check out the project’s official page here.

The Avengers is a spy-fi British television series created way back in the 1960s. According to Wikipedia, The Avengers initially focused on Dr. David Keel (Ian Hendry) and his assistant John Steed (Patrick Macnee). The show ran from 1961 until 1969, screening as one hour episodes its entire run.

Recently, a Maker by the name of Simon Jansen decided to go old school by designing a John Steed replica marionette. To hang and control Steed, Jansen fashioned a simple vertical controller. Essentially, the arms are connected to wires that move up and down; while the legs attach to a cross piece that can be removed from the controller to allow the legs to be worked separately from the main control.

The electronics for Steed are controlled by an Atmel-powered Arduino, with speech capabilities provided by an Adafruit Waveshield. The Arduino also controls the servo that moves the eyes and the solenoid that opens the mouth.

“In addition to those I have a 433MHz ASK receiver that listens for the remote control signals to move his eyes and make him speak,” Jansen wrote in a recent blog post re-published on Makezine.

“There is also a Sharp IR distance sensor from Mindkits that I use to detect if anyone gets too close to Steed. The distance is settable via a potentiometer on the main board. Power is from a simple wall wart supply.”

In addition to the above, Jansen said he fashioned two remote controls that send signals to a receiver.

“The Arduino detects the signal, works out the period then triggers the appropriate action based on what the period is,” he explained. “I simply use a 555 timer circuit in the transmitter to send three different signals depending on which button, or combination of buttons, are pressed.”

Interested in learning more about the old school Steed? You can check out the original blog post here.