Ever wonder what it would be like to give yourself wings or perhaps a tail? Well, Moscow-based artist Dmitry Morozov has. So much so that the Maker, who we’ve come to know as ::vtol::, has developed a robotized installation that does just that. 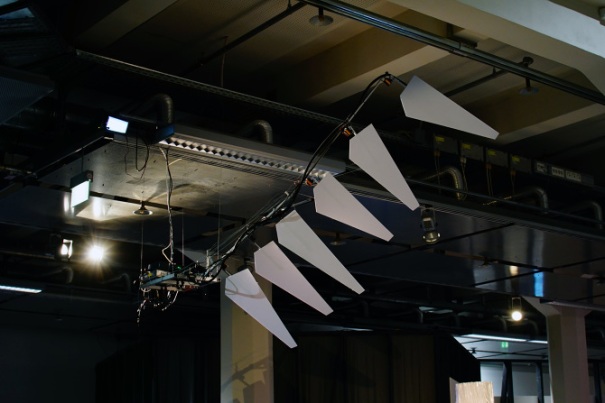 Commissioned by the Center for Art and Media (ZKM) in Karlsruhe for this year’s GLOBALE: Exo-Evolution exhibition, the aptly named wing project measures eight feet wide and is suspended 10 to 13 feet in the air. And that’s not even the most impressive part — what ::vtol::’s interactive robotic wing can do is mind-blowing.

A thin cable hangs from wing, the end of which is outfitted with dermal miographic sensors that measure the electrical potential of muscles. Visitors are encouraged to place these sensors on their heads just behind the ear and rhythmically swing the object by simply moving their ears.

“The main idea of the project is an ironical and at the same time serious research on the topic of development of new instruments and prostheses as ‘extensions’ of human body and accordingly its possibilities and potentials, which are being revealed by new technologies,” ::vtol:: explains. “At the same time, it’s an attempt to stimulate people to perceive and train the body in a different way, expanding the limits of self-control and self-organization in order to adapt to the new conditions.”

An Arduino Uno (ATmega328) serves as the brains of the operation along with a series of servo motors, linear actuators and cords. As for its software, ::vtol:: is using the Pure Data programming environment.

Intrigued? Check out the project’s official page here, and be sure to watch it in action below!