Pet rocks were all the rage in the mid-’70s, and then came the Tamagotchi in the ’90s. So what could be the next craze in the current millennium? Pet robots? It’s not a far reach. Robotics has been a disruptive innovation in STEM education, with a growing number of kits being deployed by K-12 educators to teach science and engineering. These easy-to-build and even easier-to-understand sets continue to provide students with a basic overview of programming concepts, with hopes of inspiring more children to pursue STEM disciplines. However, students will eventually need to move on to writing “real world” programming languages like Java, Python, C, and C++. Plum Geek saw this need, and came up with the next logical step to prepare the next wave of hackers, tinkerers and Makers. 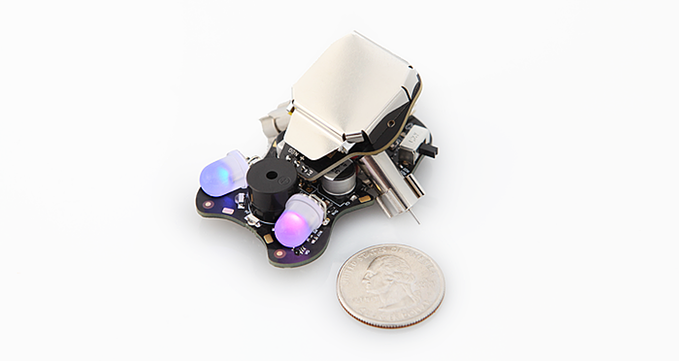 Meet Wink — a low-cost, Arduino-based robot that instructs students how to write code, while programming the robot’s behavior as well. The project was originally conceived by a team of Makers who wanted to help transition students from graphical programming to more powerful written code languages. With Wink, students will learn the foundations of the C programming language, which is widely used to control microprocessors used in all manner of robotics, embedded systems, automation, and the growing Internet of Things revolution.

The Wink robot includes a free and open curriculum with lesson plans and guide videos that could be easily adopted at home, in the classroom, and at workshops. Students will train their new pet robot by programming common robotic tasks such as line following, light seeking, barrier detection, and autonomous roaming, while also leaving room for students creative experimentation. 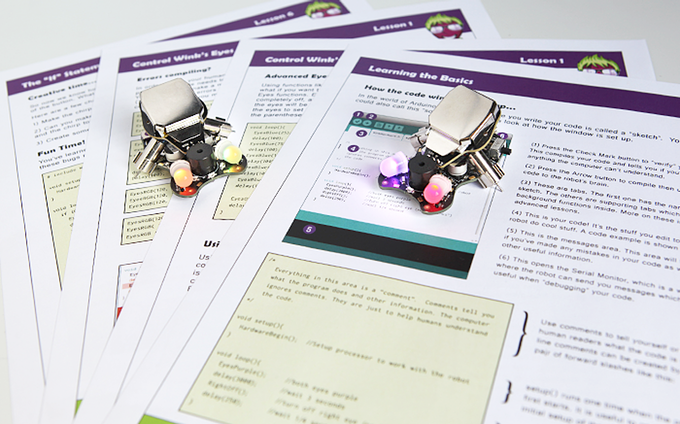 If Wink looks vaguely familiar, that’s because the bug-like bot is the sibling of Plum Geek’s earlier Kickstarter success Ringo. These palm-sized pet robots may be small, but still pack quite a punch. Built around an Arduino Uno (ATmega328) at its core, Wink runs on a fast motor and each motor can be independently driven forward or backward. At full speed, it can zoom across the floor or table in the ‘wink’ of an eye — surely quicker than any pet rock you ever had!

What’s more, the bot is equipped with three sensors on top to measure any light that’s straight ahead and 45 degrees to either side, an infrared barrier headlight tucked under its nose to detect obstacles that stand in its way, four more sensors underneath for high-speed line following and edge detection, as well as a piezo buzzer to emit simple chirps and alarms. Onboard is a rechargeable 240 mAh LiPo, giving you hours of fun and experimentation. 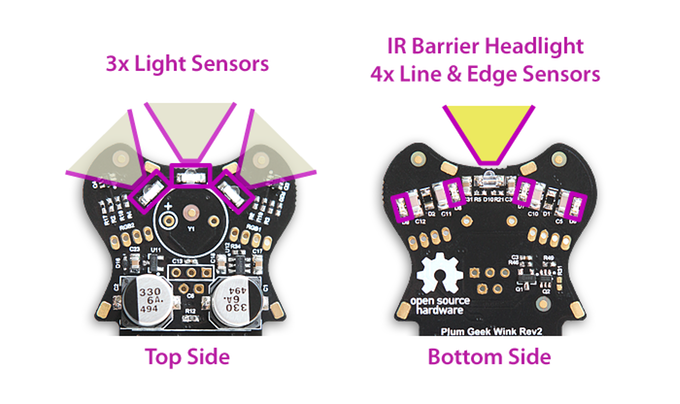 Interested in a new pet robot for your house or classroom? Head over to Wink’s Kickstarter campaign, where its creators have once again stormed right by its initial goal. The first batch of units is expected to ship sometime in January 2016. 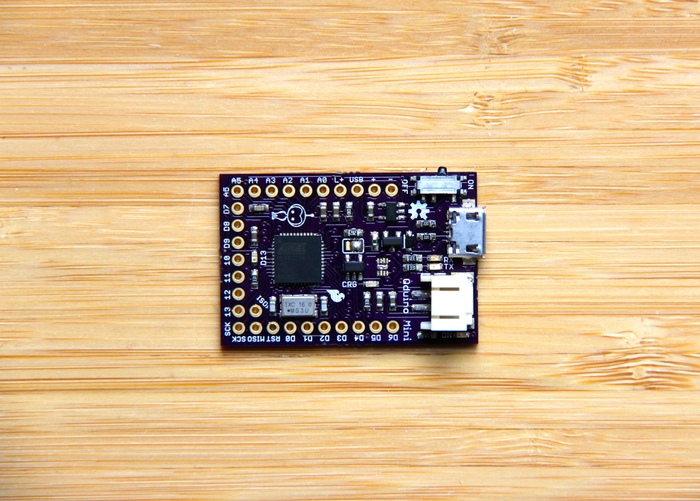 This Arduino-compatible board features a built-in battery charger and fuel gauge. Qtechknow is currently seeking $12,500 on Kickstarter. 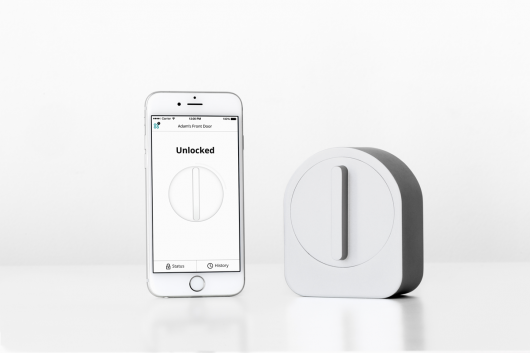 This smart device will let you enter your home with a secret knock on either the door or phone, thereby replacing your keys in a matter of seconds. Sesame is currently seeking $100,000 on Kickstarter. 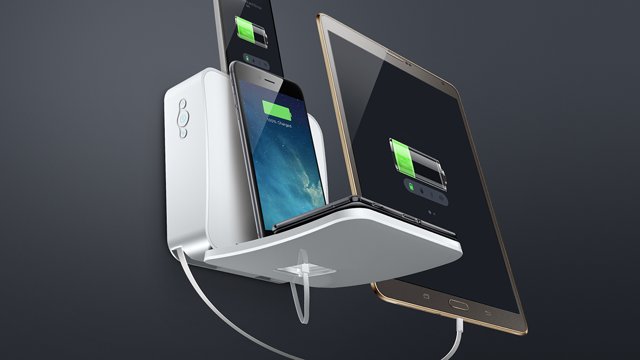 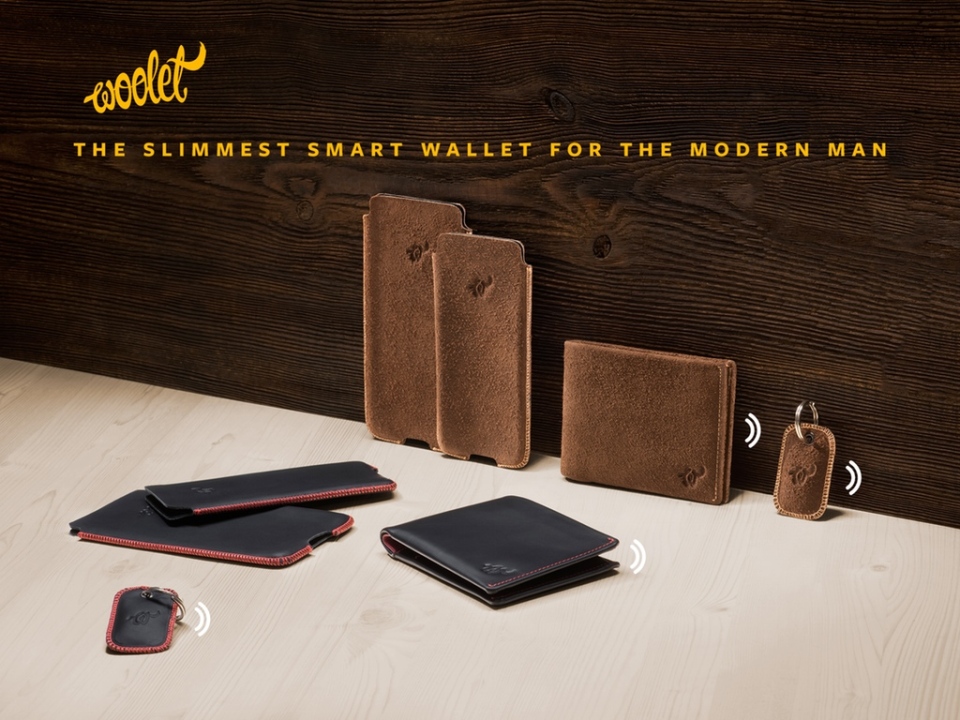 This next-generation, Bluetooth-enabled wallet keeps your cash and cards safe. Woolet is currently seeking $15,000 on Kickstarter. 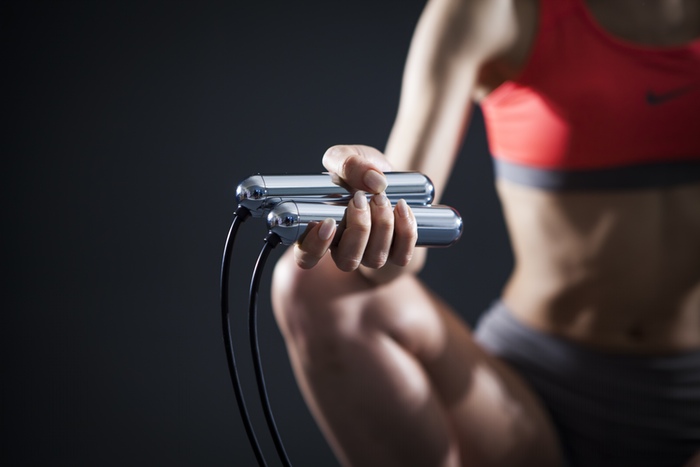 This LED-embedded jump rope connects to your smartphone and creates an “anywhere, anytime” fitness experience. Tangram Factory is currently seeking $60,000 on Kickstarter. 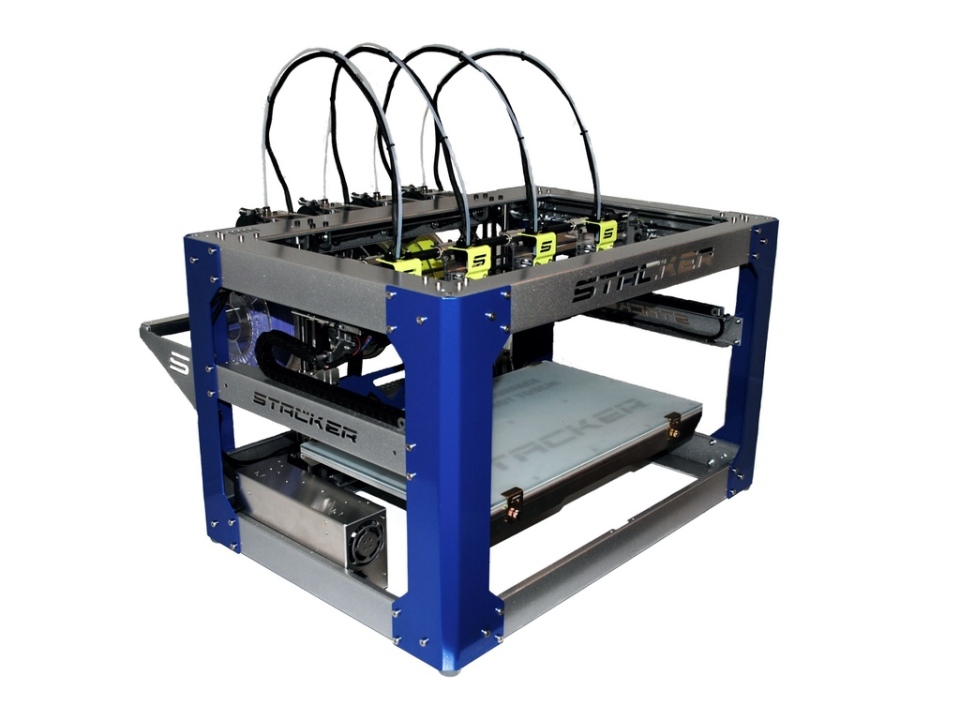 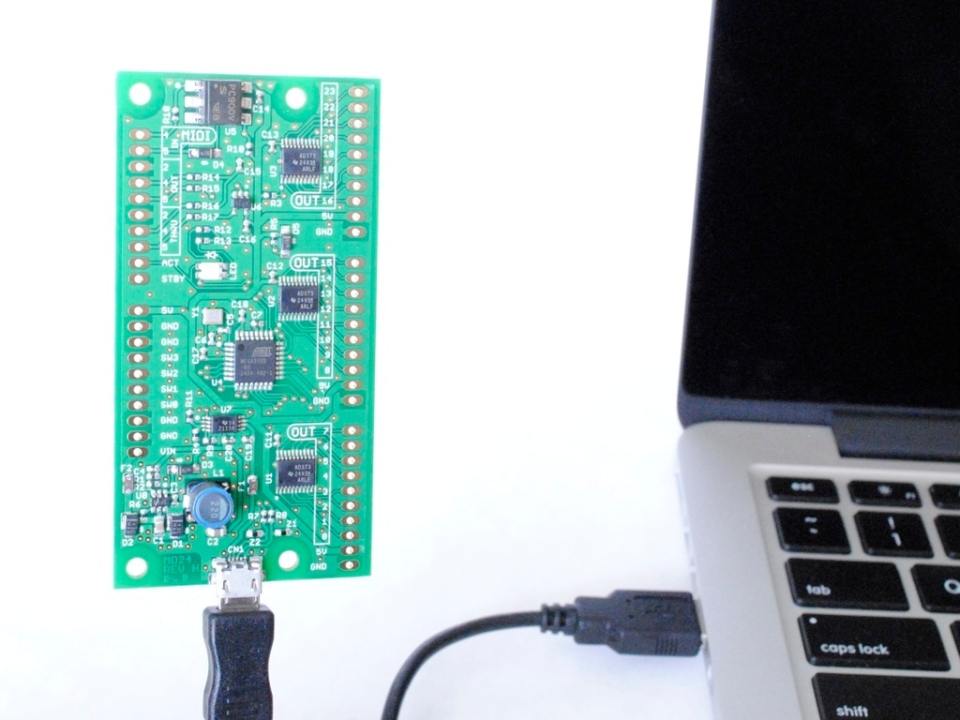 This widget makes it easy to control real-world things using MIDI messages from your computer or controller. MIDIWidget is currently seeking $6,000 on Kickstarter. This device boasts a flashlight, GPS, Bluetooth, a backup battery and a digital walkie-talkie, making for the ultimate adventure gadget. FOGO is currently seeking $125,000 on Kickstarter. 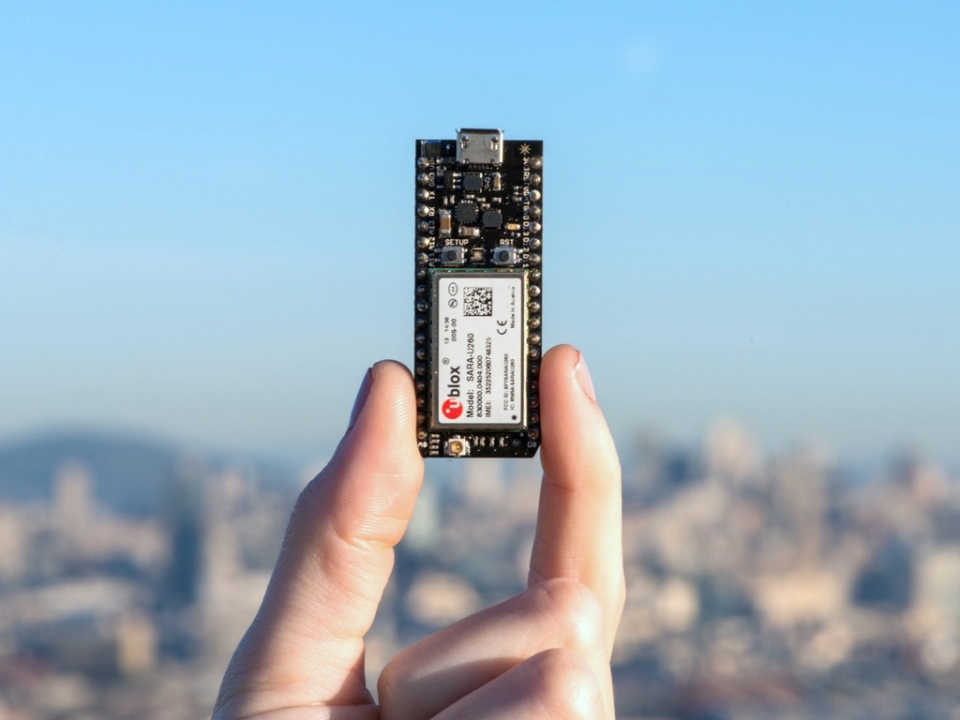 This tiny Arduino-like cellular development kit comes with a SIM card and an affordable data plan for low-bandwidth things. Spark.IO is currently seeking $30,000 on Kickstarter.

Did you happen to miss last week’s notable campaigns? If so, you can check them out here.

Well, it looks like we’ve come a long way since the days of pet rocks. While the concept of a digital pet may not be all that new (think Giga Pet, Furby, AIBO and Tamagotchi), a recent project from Plum Geek is looking to change the game with its palm-sized bot that not only has its own personality and is capable of responding to commands, but aspires to introduce children to programming as well. Ringo — which has debuted on Kickstarter — is a super-friendly pet robot bug based on the Arduino Uno (ATmega328) and packed with a number of electronic goodies such as an accelerometer, gyroscope, communication sensors, six RGB LEDs, a music chirper and more.

“The robot was inspired and co-designed by my 1st grade daughter Hailey and my 3rd grade son Parker, who are both already writing C code. Ringo grew out of a project intended to build just one robot for my kids but we realized something much greater could be done in producing Ringo for the masses,” explains Kevin King, Plum Geek Founder. “We hope it will catch the curiosity of young engineers and also have a particular appeal to girls who may not otherwise become interested in coding and technology.” 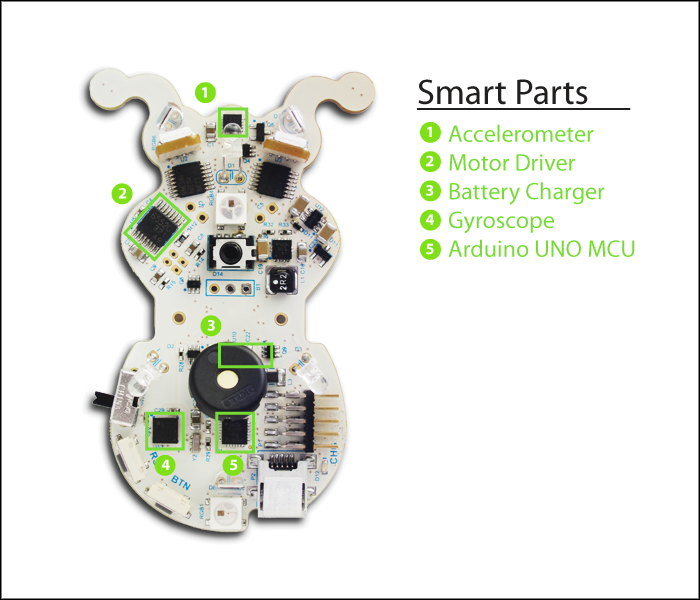 The device is pre-loaded with 10 different behaviors, enabling a user to begin playing with it straight out of the box. Once activated, anyone can guide their robotic pet via a remote control. Shine the light in the dark and Ringo will chase the glow like a cat and a laser pointer. Draw a line on the floor and he’ll use his edge sensors to follow. Nudge him and his built-in accelerometer will decipher direction and begin heading towards your finger. Similarly, when tapped in scaredy mode, he will head the opposite way.

An embedded gyroscope is tasked with keeping Ringo pointing in the same direction, so no matter which way he is turned, he’ll return to his original position. Beyond that, Ringo navigates his surrounding area with “ninja-like” agility using a pair of pager motors, which can determine his current and desired location. Meanwhile, users can program his sensors to travel specific directions and distances.

Makers can activate and switch between behaviors using a remote control, while also customizing their own using standard Arduino functions and the Arduino IDE. Ringo’s embedded IR light sources can be enabled individually in any pattern and driven together simultaneously, which allows for remote signals to communicate with other Ringo bots or appliances. Furthermore, a 38 kHz receiver is designed to sense the modulated light signal produced by most TV remote controls. 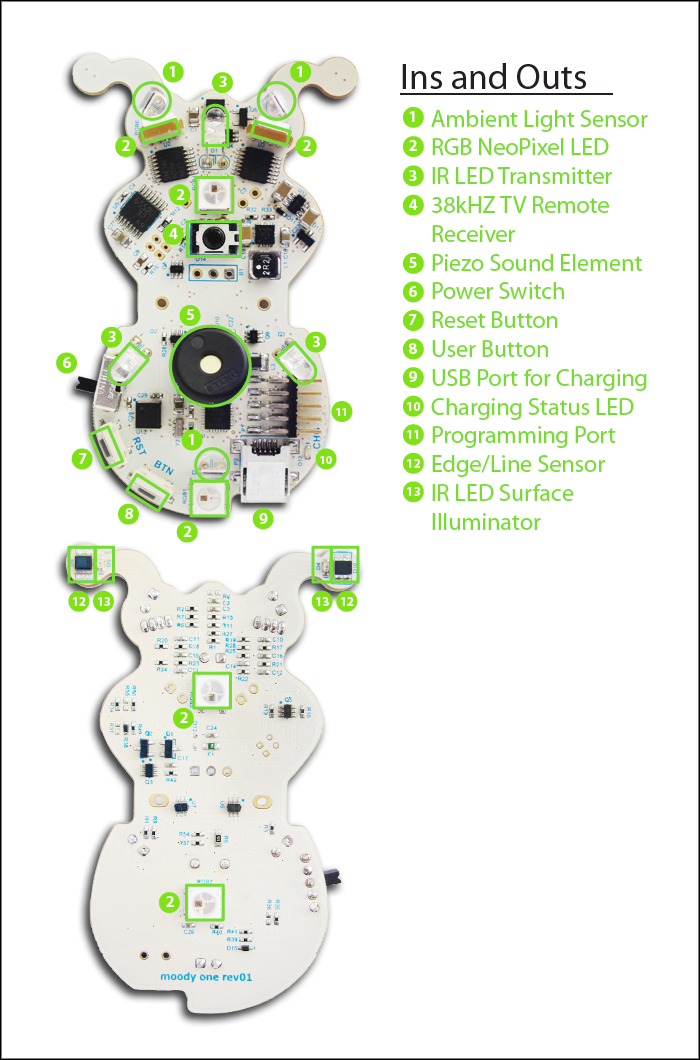 “We have always been interested in the idea of the ‘digital pet,’ and for that matter, any kind of machine or robot that exhibits a personality.  That was the real driving force behind the design of Ringo.  We wanted to put some really useful parts on a circuit board that is very easy to program, then see what people do with it.  We’ve already written code to do much of the heavy lifting for you, and we’ve also written a pile code examples to get you started.”

Ringo charges his battery automatically whenever plugged into the programming adaptor, or when a USB cable is connected directly to his USB port. An LED lets a user see when he has completed charging.

While virtual pets may typically appeal to children, Ringo’s advanced capabilities and open-source hardware will likely to make it a favorite for “kids” of any age. Interested in learning more about this fun way to get young Makers into coding? Head over to Ringo’s official Kickstarter campaign, where the team has already exceeded its $12,000 goal. Shipment is expected to begin in May 2015.