Oscilloscopes are tools conventionally used to indicate changes in signal voltages with a simple 2D XY line plot. However, with a little tinkering, they can also become a gaming monitor. That is just what programmer Pekka Väänänen demonstrated. The Maker had rigged an aging oscilloscope into a playable version of the classic first-person shooter game Quake. 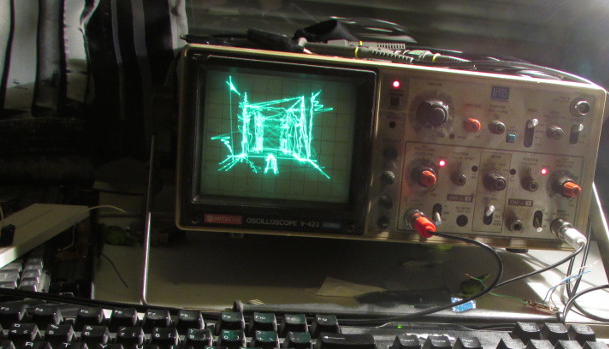 While gaming demakes — which refer to the process of adapting modern games to the standards of older platforms — have risen in popularity over the years, this one will surely spark up some nostalgia. In fact, Väänänen isn’t the first to modify an oscilloscope to play a video game. Back in 1958, physicist William Higinbotham designed Tennis for Two on a Donner Model 30 analog computer, which simulated the game of tennis (or ping pong) on an oscilloscope display.

To bring his creation to life, Väänänen used a Hitachi V-422 oscilloscope and a simple XY-oscilloscope simulator written in the Processing language. The programmer’s complex demake required him to transform the 3D graphics of Quake into a signal the oscilloscope could read and display, such as audio.

The system used the PortAudio I/O library in order to get a signal from the PC over to the oscilloscope. By outputting the game through an audio card, Väänänen was able to alter the game’s engine to be read as a series of changing voltages that the oscilloscope would draw in series of rapidly moving lines.

Well, it looks like Doom isn’t the only game that can be modded and played on unusual devices, like printers. Interested? You can read all about Väänänen’s complicated build here. Or, you can just watch it in action below!