What’s better than the build up of anticipation and excitement before unboxing a present? Originally conceived as a birthday gift, Maker Raffael Herrmann has devised an electronic puzzle box that will take a little longer than usual to open. Though the Captain Herrmano Mystery Box contains an actual present inside, the recipient must first go through a series of puzzles. Beat that, wrapping paper! 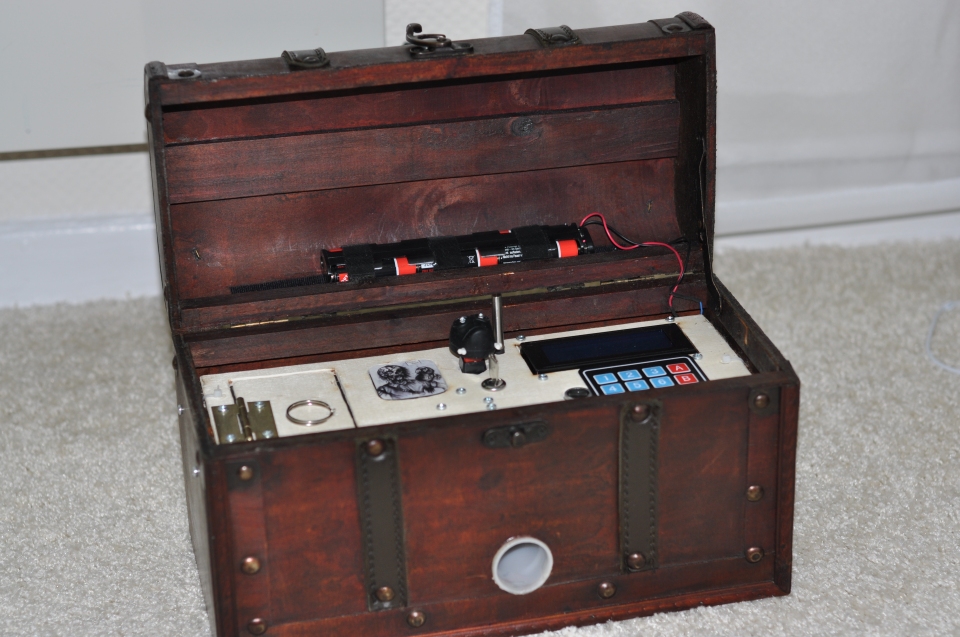 “The box is a so-called ‘reverse geocaching puzzle.’ The inspiration for this project was a reverse geocaching box built in 2009 by Mikael Hart. Unlike Mikael’s version of the box, it’s not enough to simply find and visit the target place. To unlock the treasure of Captain Herrmano, the player has to solve more tasks,” Herrmann writes.

The length of the gameplay is contingent upon how quickly the gift recipient, or player, solves the riddles. Theoretically, one could finish it within an hour or two.

Inside its trunk-like housing, the project is controlled by an Arduino Mega (ATmega1280) and hooked up to several components, including a temperature sensor, a GPS receiver, a carbon monoxide sensor, an ultrasonic sensor, a speaker, a display, a mini-SD card, and a servo. The box also is equipped with a numeric keypad and an LCD screen for user input and output.

Why a GPS unit or CO sensor? Some of the puzzles require outside interaction in order to advance to the next level, such as blowing tobacco smoke into a tube, carrying the box several meters above sea level and even grabbing a telephone. Others, however, simply command players to enter answers to numeric problems and sending emails with the word “secret.” You can watch it all in action below!

Tired of someone opening your presents too quickly? Not a huge fan of wrapping paper? You’ll want to read about the Maker’s entire build here.