First coined by author K. W. Jeter, steampunk is best defined as a sub-genre of science fiction and fantasy literature that commonly features some aspect of steam-powered machinery, especially in a setting inspired by industrialized Western civilization during the 19th century. Over the years, there has undoubtedly been a rise in the theme’s popularity, as seen across Maker Faires and in a number of slick DIY projects like this wristwatch. And, while we’ve seen countless devices arise, one space that seemed to go untouched was 3D printing. That was until now.

That’s because John Davis recently devised a steampunk-inspired iteration of the Printrbot GO, which essentially consists of the printer housed inside of an antique wooden suitcase from the 1920s. Aside from the inclusion of an LCD display, it’s safe to say that it looks a machine straight out of the “Wild, Wild West.” Job well done!

The unit itself is equipped with antique bronze extruder gear, a set of spur wheels, a Frankenstein-style knife switch, and a pair of leather straps, among a number of other features to round out its aesthetics. 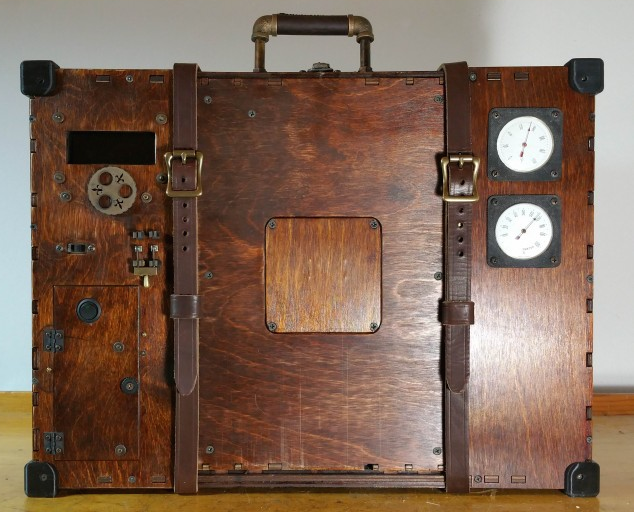 “Since before I even owned the GO, I had a vision in my mind about turning it into a steampunk steamer trunk kinda thing, and critical to that vision were suitcase belts,” the Maker writes. “I can’t imagine a single feature (well, in addition to darkly stained wood) that says ‘olde timey’ like leather belts up the sides of a piece of a luggage, so I knew I needed to get something like that working for me at some point.”

Beyond that, Davis located some old-school weather dials that once measured temperature, humidity and barometric pressure and repurposed them to monitor the 3D printer’s performance. These were placed on the other side of the suitcase, away from an LCD that he modded the gadget with. The Maker also decided to enhance his contraption’s display, swapping out its original bluish screen for one that was amber-colored to provide that full Steampunk visual effect. 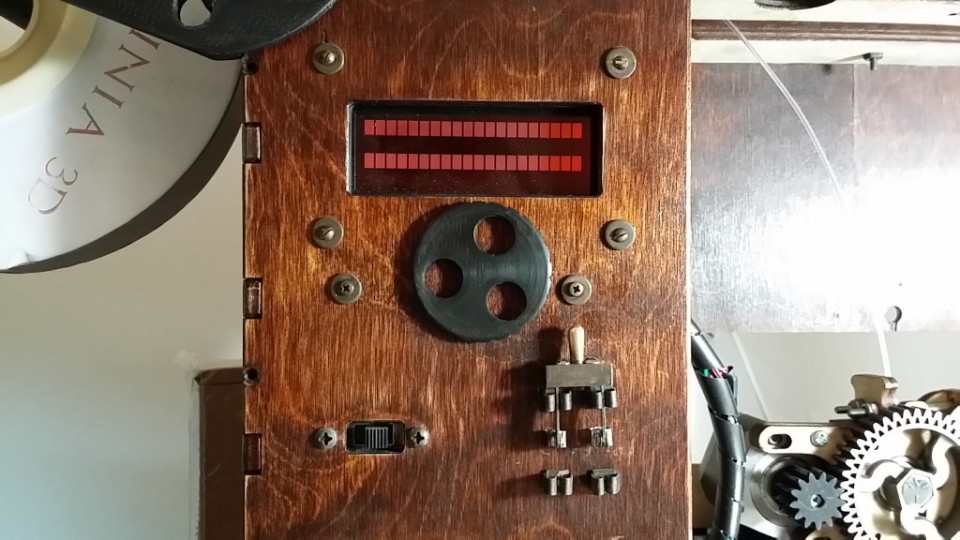 And, of course, the alternative world-esque device is driven by a Printrboard electronic set (AT90USB1286) and powered by an X-Box 360 PSU. Impressively, Davis was even able to add a Raspberry Pi with OctoPrint to allow for wireless control and remote monitoring of his prints (by webcam) via his smartphone. The Pi was mounted inside the front right hand panel, which enabled him to attach the camera onto the side of the gantry.

Those looking for the perfect Maker Faire accessory can head over to Davis’ exhaustive project page here, which breaks down the build step by step.