Though the Atmel MXT112S powered Moto 360 has only been out for a few days, that was plenty of time for the Makers at Phandroid to apply one of the coolest custom smartwatch interfaces ever to the device’s circular display. If you grew up playing GoldenEye 007 on Nintendo 64, you will surely appreciate the Secret Agent Watchface. After all, a bold watch calls for some bold measures. 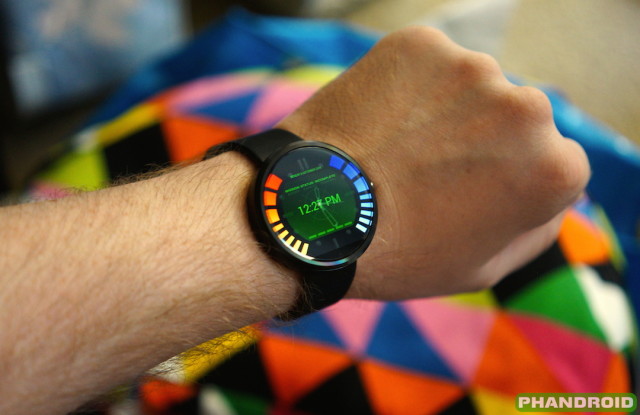 Inspired by the classic video game, the design emulates that of 007 agent James Bond’s wrist-adorned gadget that allows you to read mission files, check your health and body armor, detonate explosives, and employ a bolt-blasting laser.

“The watchface faithfully recreates that same UI, complete with health and armor bars (now used to show battery life). While the watchface originally launched before a round Android Wear device existed, it now finds itself perfectly at home on the Moto 360,” Phandroid writes.

The smartwatch face carries over colored tiles and the classic deep-dark-green menu interface. Rather than monitoring how close you are to termination, the round display reveals the wearer’s real-life, non-deteriorating health via the red bar on the left, while the device’s battery life using the blue bar on the right.

“Smartwatch software can only improve from its rather rudimentary beginnings. As device and operating system makers like Google hand developers more tools through application programming interfaces (APIs), the smartwatch app marketplace will grow to include more of the fun hacks that the device makers don’t think up themselves. Though smartwatches may never be as robust a playground for developers as smartphone have been, clever interface designs and neat tricks that give us the ability to customize and tinker with our smartwatches will only continue to blossom over the coming months.”

And while the display looks incredibly accurate to that of Mr. Bond’s, sadly no laser beam is included.