Kickstarter first opened its virtual doors on April 28, 2009. Since then, the wildly popular crowdfunding website has tracked over $1 billion in pledges from 5.9 million individuals who actively funded 59,000 creative projects.

Unsurprisingly, quite a number of Atmel-powered Kickstarter projects have been successfully funded over the past year, including:

MicroView is a chip-sized platform with a built-in OLED (64×48) display that allows Makers to see what the Atmel-based board is “thinking” without having to link with a PC.

The device, designed by the Geek Ammo crew, is built around Atmel’s versatile ATmega328P microcontroller (MCU).

Designed by Pensa Labs, the DIWire transforms drawn curves into bent wire that can be assembled to make just about anything.

Powered by an Atmel-based Arduino board, the Primo play-set uses shapes, colors and spacial awareness to instruct programming logic through a tactile, warm and magical learning experience  .

Driven by an ARM-based Atmel chip, the Robox was designed by its creators to “demystify” the 3D printing process.

The Atmel-powered (ATmega2560) EX¹ allows Makers and engineers to quickly print circuit boards on a wide variety of material.

Simply put, the EX¹ is helping to transform electronics and prototyping in the same way that conventional 3D printing revolutionized traditional manufacturing.

The Touch Board is an Atmel-powered platform (ATmega32U4 MCU) that allows Makers to more easily create interactive and responsive projects.

The Touch Board can change the world around you by turning almost any material or surface into a sensor.

Flutter is an open source Atmel-powered wireless platform with a 1000m+ (3200 ft) range.

Protected from digital intruders by Atmel’s ATSHA204 which offers 256-bit AES hardware encryption, Flutter makes it easy for DIY Makers to build projects that communicate across a house, neighborhood and beyond.

Hex – powered by Atmel’s ATmega32U4 – is a 3D-printed nanocopter that can be controlled using the gravity sensors in a mobile device.

Essentially, Hex imitates the movement of the smartphone or a tablet in the air. In addition, traditional throttle, elevator, aileron, rudder control systems can be used to operate your Hex.

The project’s goal? Allowing Makers to take advantage of the ATtiny85 chip’s potential, while using the familiar Arduino IDE and harnessing the super awesome support from the Arduino community.

Atmel’s SAM4S and tinyAVR MCUs are inside the Agent smartwatch which raised well over a million dollars on the crowdfunding website.

BlinkyTape – powered by Atmel’s ATmega32U4 – is a portable LED strip with 60 pixels and an integrated USB-programmable light processor.

Made of laser-cut leather, the Atmel-powered, Arduino-based Edge is a wearable light that snaps securely onto your clothing with the help of four strong neodymium magnets.

You can wear it discreetly by day or brightly at night with your winter coat, cardigan, hood, scarf, handbag, collar, pocket, belt, or wherever you’d like a touch of light.

Designed by the ST-Geotronics crew, the Open Enigma (M4) Project – powered by an Atmel-based Arduino Mega (ATmega1280) – first surfaced towards the end of 2013.

When it went live on Kickstarter, the Open Engima successfully raised over $62,000, facilitating the implementation of several important stretch goals.

Skirmos currently offers a trio of preset gametypes: basic, free-for-all and team slayer. However, the platform is ultimately expected to boast an almost unlimited number of gametypes.

OSCAR is a super high resolution 9.7″ screen with an Atmel-powered (ATmega32u4) adapter that allows users to easily link the display to their PC, Mac or Linux machine.

The board is Arduino compatible ,which makes modifying the behavior easy, as all the software and hardware is open source.

DigiX is an Atmel-based development board (AT91SAM3X8E) with WiFi and Mesh networking, Audio, USB OTG, microSD and 99 i/o pins.

The DigiX was designed to be a dev board ready for any project – with no compromises.

The Reactor Core is a hardware programming platform for Arduino boards and stand-alone AVR-based microcontrollers (MCUs).

Designed by Frank Fox, the Reactor Core is powered by Atmel’s ATmega328P MCU and an FT232R for USB to serial communication.

Atmel’s AT90USB128 MCU powers this three-in-one mouse. Key features include 30 keys for each hand, finger key rows angled for fast access and a two-axis analog joystick for each thumb.

The Atmel-powered Pi-Bot (ATmega328) is a hands-on robotic learning platform for both students and professional engineers.

According to STEM Center USA CEO Melissa Jawaharlal, the team designed the Pi-Bot from the ground up to optimize functionality and ensure affordability.

Game Frame: The Art of Pixels

As Williams notes, video game artists used to draw everything with a sheet of graph paper, a few colors and a couple of animation frames.

The kit includes all mechanical pieces in grey and neon yellow plastic (the yellow fluoresces under black light), spacers, brackets, ball bearings and hardware required for assembly. In addition, the kit is packed with electronic components, PCB and wire harnesses.

The MicroSlice is a mini laser cutter and engraver.

The open source platform, powered by an Atmel-based Arduino Uno (ATmega328), is currently being promoted as a kit that takes approximately 15 hours to build.

This four-axis parallel-mechanism desktop robot arm is modeled after the ABB industrial PalletPack robot and is built around Atmel’s ATmega328 MCU which powers a custom board.

The uARM platform is constructed with acrylic or wood parts and fitted with standard RC hobby servos.

Designed by Tyler Nehowing, the platform is fully programmable using the unmodified Arduino IDE, as it appears as an Arduino Uno running at 16MHz/5V.

OpenBCI – designed by Joel Murphy & Conor Russomanno – is a low-cost programmable open-source EEG platform that offers Makers easy access to their brainwaves. In addition to an ADS1299 IC, the OpenBCI is equipped with Atmel’s ATmega328 (+ Arduino’s latest bootloader).

The project’s vision?   ”To realize the potential of the open-source movement to accelerate innovation in brain science through collaborative hardware and software development.”

Mark Davidson recently designed an Atmel-powered (ATmega328) Arduino prototyping shield that can also be used as a stand-alone board for various DIY Maker projects.

Dubbed the “White Bread Shield,” the platform is compatible with Arduino Uno boards.

The Hauntbox is a prop controller and automation machine that is browser-configured and open source.

The ATmega2560-based platform allows Makers to easily automate inputs and outputs without the need for complex programming.

ControLeo – designed by two retired Silicon Valley engineers – can probably best be described as a quad relay controller enclosed in a professional box.

The platform is driven by Atmel’s ATmega32u4 paired with an Arduino Leonardo boot loader.

Aptly described as “electronic building blocks” by the GHI Electronics crew, the Fez Medusa is designed to keep soldering irons optional with a comprehensive ecosystem of mainboards, sensors and control modules.

The Atmel-based SODAQ (ATmega328P) is a LEGO-like, plug-in, rapid prototyping board.

Simply put, the multi-feature microprocessor board allows both Makers and engineers to easily connect a wide variety of sensors and devices to the Internet.

A Maker by the name of Gabriel Anzziani recently designed a rather impressive oscilloscope watch built around Atmel’s versatile ATxmega256A3U MCU.

The device boasts all the trappings of a modern watch (time, calendar and alarm), along with all the features of the popular Xprotolab – oscilloscope, waveform generator, logic analyzer, protocol sniffer and frequency counter.

The Cookie’s compact form factor (available in two form factors, or shapes) makes it easy to carry, experiment with and expand.

Little Robot Friends are both interactive and customizable, each with a unique and evolving personality.

According to Mark Argo of Aesthetec Studio, the Little ‘bot family is built around Atmel’s ATmega328P MCU. Each Little Robot is powered by two rechargeable AAA batteries and depending on the frequency of use, should last for weeks or months on a single charge.

According to project designer Richard Haberkern, 32 ultra-bright LEDs are positioned in a landscape array to provide bright, even and controllable lighting, drawing only 88 watts. Last, but certainly not least, a built in electronic dimmer makes the light intensity adjustable to fit just about any environment.

The Delta Six mirrors the look of a modern military combat rifle, including real time aiming as well as a kickback sensation. The Atmel-powered, Arduino-based Delta Six was developed using IR sensors, accelerometers and gyroscopes to provide unparalleled arcade experience.

The controller is compatible with Xbox 360, Play Station 3, and PC systems – and upgradeable for next-gen systems like Playstation 4.

Created by Laura Lippincott, Neko was brought to life with an Arduino Mega (Atmel ATmega1280), hobby parts and a 3D printer.

The ‘bot is currently being primed with color data in an attempt to make him more creative.

Dubbed the Ambient Board, the Kit hardware comprises two printed-circuit boards – an interchangeable daughterboard or shield, and an Arduino-compatible data-processing board. As the name suggests, it is equipped with sensors to measure air composition (CO and NO2), temperature, light intensity, sound levels and humidity.

Sparki – The Easy Robot for Everyone

Sparki is an easy to use Arduino-based robot (ATmega32u4RC) that offers a fun introduction to programming, electronics and robotics.

Although Sparki is simple enough for beginners, the ‘bot is packed with more than enough features to satisfy more experienced Makers.

Designed by Barobo, the Linkbot  is a modular robot platform powered by Atmel’s ATmega128RFA1 (running at 16MHz) that boasts 100oz-in (7.2 Kg-cm) of torque and a free-run speed of 300 deg/sec. 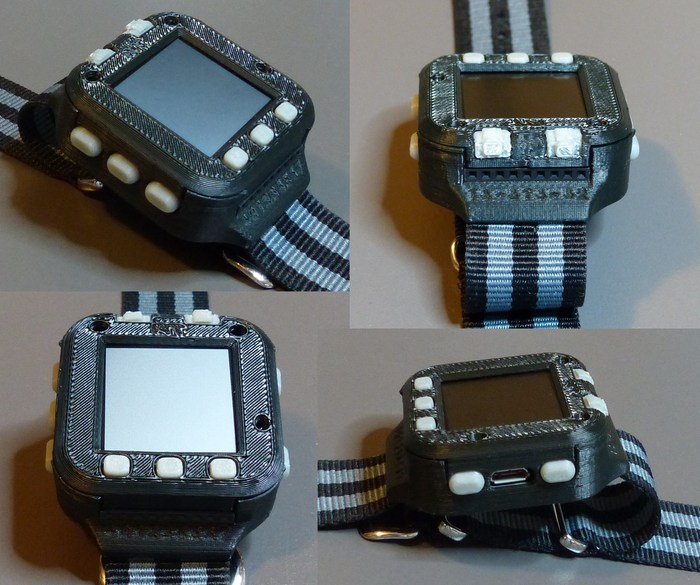 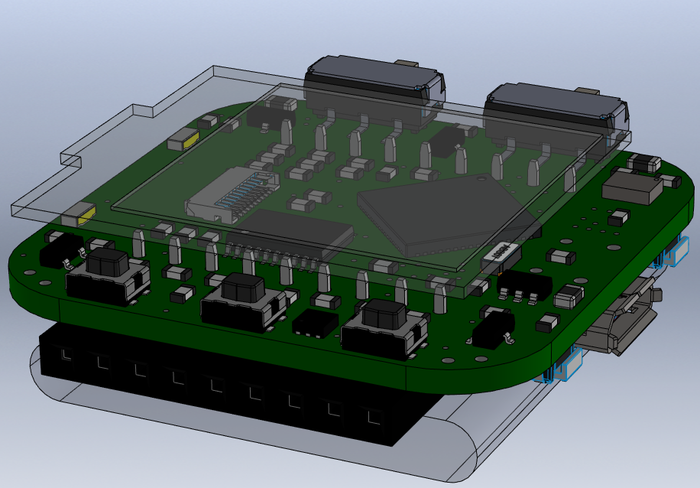