Sorry to disappoint, but no, this isn’t Elmo’s cousin from the Italian version of Sesame Street. If you’re an engineer, it’s something much, much better. A new shield design offering proximity and five touch buttons for the increasingly popular range of Arduino boards. If, after that explanation, you’re none the wiser, read on!

Arduino boards are a range of popular, open-source hardware and software development boards based on Atmel’s range of AVR and, most recently, ARM processor-based SAM3X microcontrollers. The focus of Arduino’s efforts is to make the lives of artists and hobbyists easier by simplifying both the programming of microcontrollers and development of the hardware surrounding them. For professional engineers, Arduino provides an ideal platform for rapid prototyping, test systems and concept design. 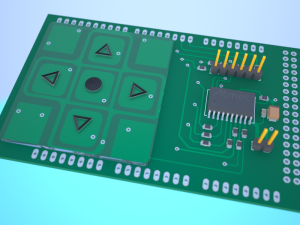 The TickleShield, based on Arduino, aims to simplify the use of capacitive touch.

The functionality of the Arduino boards can be expanded by daughter cards that stack on top, known as “shields”. In order to further simplify the use of capacitive touch, and bring it to Arduino users, I recently started the “TickleShield” project (see picture). As is the way in the wild-wild-west of open source, the project hops along in fits and starts, gaining more and more traction as the concept is shared and feedback on the idea is received.

Of course, there is no better way to rapidly share and gather feedback than via Atmel’s new Spaces cloud-based collaboration workspace where the project, incidentally, is hosted. Why not drop by and participate? Perhaps you have some great ideas on how this shield, or potentially other future touch shields, should function?