All dads are terrific, but this one is just out of the world amazing. After devising a Mission Control Desk for his older son a few months ago, Maker dad Jeff Highsmith decided to compliment his earlier creation with a spaceship for his younger son’s room using Atmel-based Arduino boards. 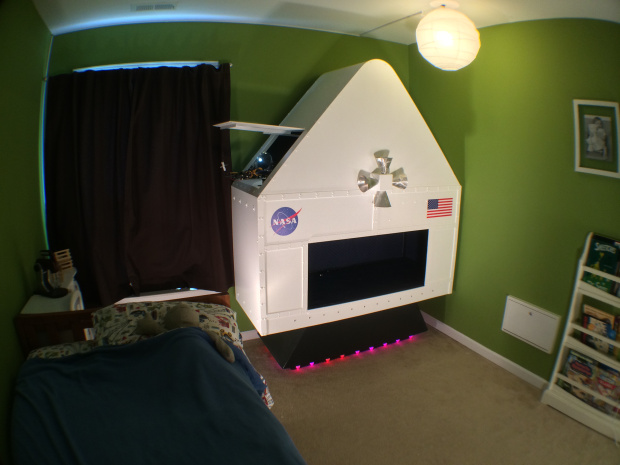 According to MAKE Magazine, the spaceship features a control panel “full of interesting displays and whiz-bang space sounds” along with a joystick capable of controlling lights and sounds for the engine and thrusters. The payload bay has a motorized hatch and contains a robot arm that can be remotely operated over video feed to deploy payloads like toy satellites. Headsets provide an audio link between the spacecraft and Mission Control in the other room, so Highsmith’s sons can practice collaborating on their space missions. The room is equipped with LED lights, real switches and inputs that not only flash but trigger sound effects. To add to the NASA-like simulator, Highsmith even included a bass shaker in the floor so his sons could actually feel the rocket taking off. 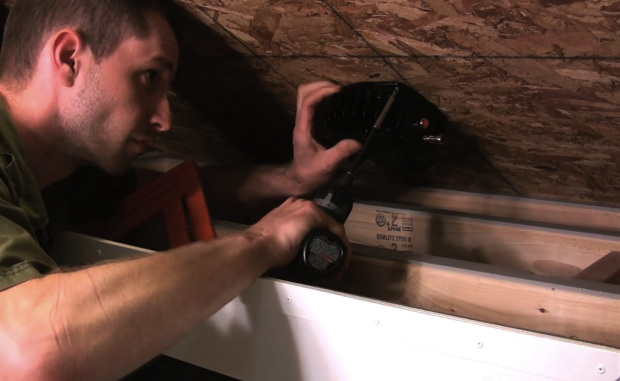 To really give the project the NASA effect, Highsmith added a few space shuttle features such as the payload bay with a robotic arm. Using the remote video screen and remote controller mounted on the the control panel in the crew compartment, the “astronaut” can control the arm to deploy or retrieve payloads, the Maker dad notes. The power supplies for the control panel and LCDs also rest in the payload bay, in addition to the Raspberry Pi and Arduino for the joystick. 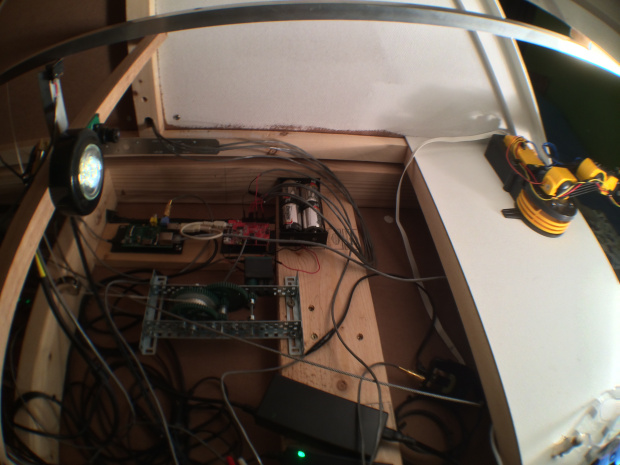 “The main engine’s nozzle houses the audio mixer and bass amplifier. On the bottom of the nozzle, I mounted a strand of GE Color Effects LED Christmas lights. I programmed an Arduino to control the strand, whipping up a simple color-changing pattern that resembles the flames of a rocket. This Arduino also controls the red LEDs in each of my thrusters. Command of the engine lights and and thruster lights is done through a USB joystick. I programmed a Raspberry Pi to read the joystick. The Pi maps the different axes of the joystick to different directions, and commands the Arduino to light the appropriate LEDs at a brightness commensurate with how far the joystick is pushed in each of the directions. The Pi also plays rocket sounds through the ship’s sound system, with the sound volume tied to the severity of the motion. In other words, if you push the joystick a little bit, you’ll get a dim light and a soft sound. As you move the stick further in that direction, the light gets brighter and the sound gets louder.”

Highsmith describes in the video below how the sequences programmed into the desk and ship are meant to spark imaginative not competitive play, and says he hopes the work he put into the setup will inspire his sons to be Makers as well.

To see the entire step-by-step breakdown of this project, soar on over to MAKE’s writeup here.