Atmel just did a great 4th of July infographic celebrating the resurgence of American manufacturing. The US still manufactures 75% of everything it consumes. As a former auto engineer who saw millions of jobs lost and trillions of dollars washed down the drain, this really delights me. When I was an EDN editor I attended a presentation by Beacon Economics. This outfit was started by Chris Thornberg, the UCLA professor that predicted the 2007 housing crash in 2006. It was at this presentation that I learned that US manufacturing has never crashed, as many people popularly believe. Indeed, in dollar terms the output of US manufacturing has been on a pretty steady upward march.

In dollar terms, US manufacturing has been on a steady and impressive rise for 40 years.

What has declined is US manufacturing employment. 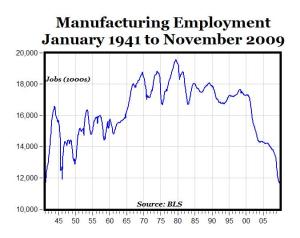 The huge increase in productivity means we don’t need as many workers in manufacturing, even though output has climbed.

This is because computers and automation and robots have greatly increased the productivity of the American worker.

The output per US worker has steadily increased over the last 70 years.

A century ago agriculture took 70-80% of the US employment. But tractors and the green revolution has allowed American food to be grown by 2% of the work force. The same revolution that improved farming is now improving manufacturing.

Indeed the future of US manufacturing has never looked better. Many companies are continuing to invest in their US operations. Atmel just created a new production line in its Colorado fab for our XSense touch sensor film. And though the 2007 crash made for a dip in manufacturing output, there is a slow but steady recovery back to the historical trend lines of healthy growth.

Indeed, the rising costs of off-shore manufacturing have caused a lot of companies to bring manufacturing back to the USA. As noted in this link:

“The reshoring trend is rocking global business, with hundreds of companies working to bring their manufacturing operations back … to North America.”

“…the recent surge in reshoring has shocked even experts and researchers.” Hal Sirkin

I myself saw this trend 4 years ago when I visited Trail Tech up in Washington State. They are a power sports manufacturer with a line of HID (high-intensity discharge) headlamps for trail bikes. Their representative told me that they were getting the vacuum-impregnated transformers from an offshore supplier. But they just could not get the quality they needed. Once the transformer was potted there was no method of incoming inspection that would reveal poor potting or construction. So they moved the transformer manufacturing back to the US.

This HID head lamp from Trail Tech uses a transformer that they make in the USA, so they can maintain strict quality standards.

Indeed, many companies are bringing manufacturing back. We have seen GE move its hot-water heater production back to the USA. GE will spend $1 billion to tool up its U.S. appliance production. This will add 1,300 jobs in Kentucky, Alabama, Georgia and Indiana. NCR (National Cash Register) moved its ATM machine production from overseas to Columbus Georgia. Farouk Systems hair driers and Coleman water coolers are coming back to US production. And good-old Converse has a line of shoes made in the US because of strict quality requirements. New Balance, American Apparel, and Timbuktu now make products in the U.S.

Dow Chemical CEO Andrew Liveris has declared that they intend to return production lines to the United States. Indeed, Hal Sirkin, of the Boston Consulting Group forecasts that two to three million manufacturing jobs will come back to the U.S. during this decade.

So don’t despair about the state of manufacturing in the USA. There are good reasons to buy American and there are good reasons to buy imports. Don’t forget the economic principle of comparative advantage, and don’t forget there will always be different advantages for different countries. David Friedman, son of Nobel laureate Milton Friedman has noted there are two ways to make automobiles. One way is to mine ore and make steel and build factories and put together cars. The other way is to fill a big boat with wheat and float it to the West. It will return full of cars. What a miracle modern economics is. So don’t worry and be happy, and if people tell you how the US is lagging, show them this chart: 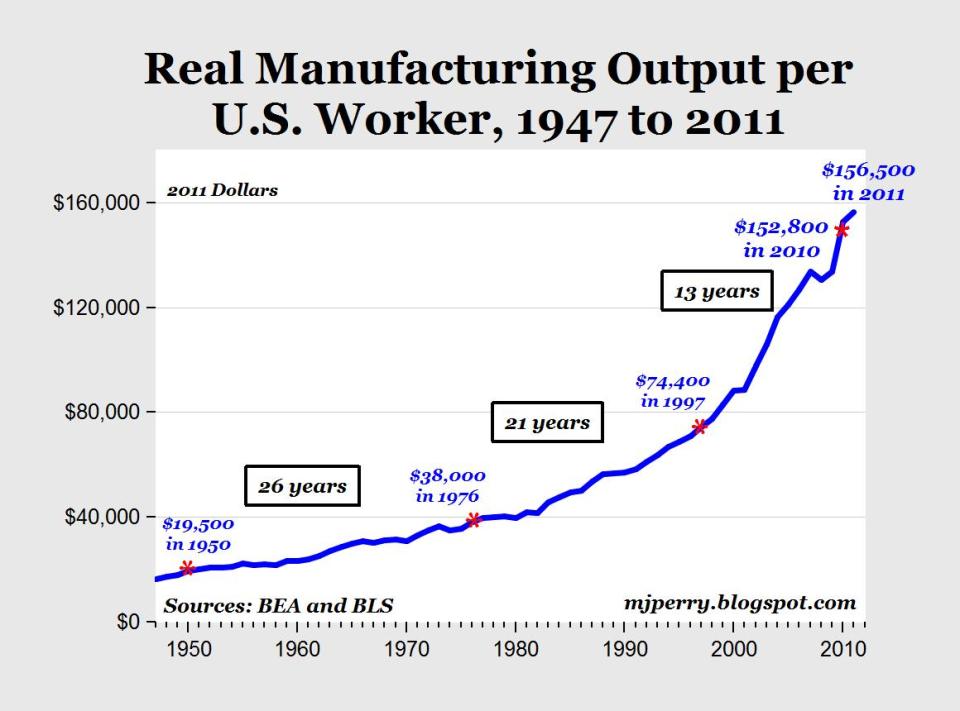 This chart shows just how healthy US manufacturing is.