Build an Arduino-based, Bluetooth-controlled Mecanum wheel robot that can move in all four directions, without rotating itself.

Mecanum wheels have additional secondary rollers offset at an angle. These allow for a device or robot equipped with four of them to move in any direction, even directly left and right depending on which combination of four wheels is actuated. If you’ve never seen this sliding locomotion method before, be sure to check out the video below to see just how this robot works. Although only shown traveling in straight lines there, these type of wheels are also capable of rotating a vehicle. 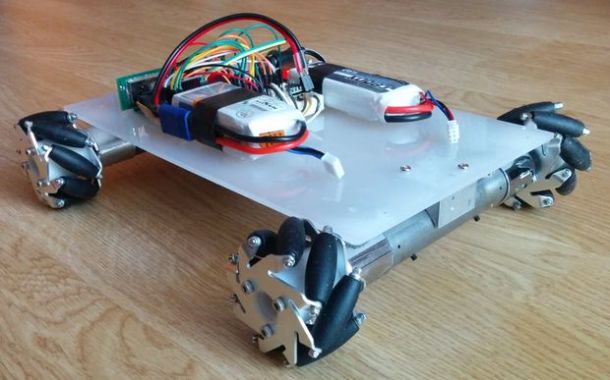 According to the author of this project, a Warsaw, Poland-based Maker named Adam, “Since I can remember I always wanted to build a mecanum wheel robot. The Mecanum wheel robotic platforms available on the market were a little too expensive for me so I decided to build my robot from scratch.”

His build is simple but elegant, with two pairs of motors attached to each other via metal tubing, then fastened to a simple chassis made out of a rectangular piece of plastic. As needed for this type of locomotion, wheels are spaced so that the smaller rollers are all pointing toward the center of the bot. 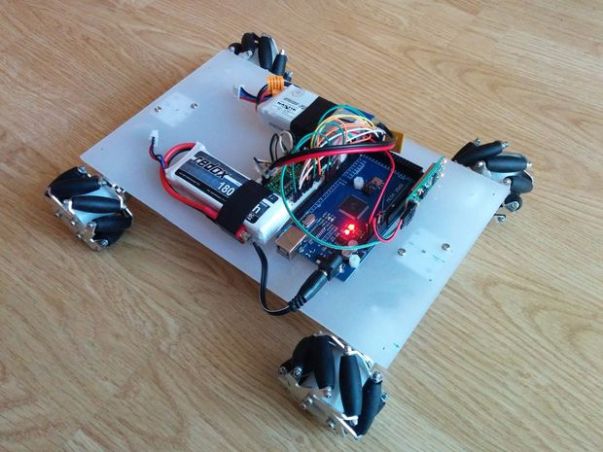 The Maker used an Arduino Mega (ATmega2560) along with a Bluetooth module that enables him to wirelessly control the robot using an Android app. The electronic system is equipped with two power sources: an 11.1V 1300 mAh LiPo for supplying the DC motors and a 7.4V 1800 mAh LiPo for the ‘duino. Adam explains what is physically happening in his Instructables article, as well as how the code generally works. If you’d like more details on his code, the full program is available on GitHub.