It’s not so much a question as to if 3D printing will be an integral part of medical procedures in the future, it’s more so when. And apparently, we are closer than ever before. While we’ve seen everything from 3D-printed splints to prosthetics to organs, a team of researchers at The Feinstein Institute for Medical Research has made yet another medical breakthrough using a MakerBot Replicator 2X.

This time, the scientists created cartilage designed for tracheal repair or replacement. Also known as the “windpipe,” the trachea is the tube that connects the upper respiratory tract to the lungs. Never before has a regular PLA filament been used to print custom tracheal scaffolding, not to mention combined with living cells to create a tracheal segment. Traditionally speaking, there has been two traditional means of reconstructing a damaged trachea — both of which present a number of constraints. Both treatments have involved removal of the affected tracheal segment.

As a solution to the growing problem, Feinstein Institute investigator Todd Goldstein along with Dr. Daniel A. Grande of the Orthopedic Research Laboratory inquired as to whether 3D printing could be a suitable alternative.

“Three-dimensional printing and tissue engineering has the potential for creation of a custom-designed tracheal replacement prosthesis in the lab so that the affected tracheal segment can be ‘swapped out’ instead of removed,” explained Goldstein. “Our results show that three-dimensional printing can be combined with tissue engineering to effectively produce a partial tracheal replacement graft in vitro. Our data demonstrate that the cartilage cells seeded on the graft retain their biological capability and were able to proliferate at the same rate as native cells.”

Similar to earlier efforts we’ve seen around bioresorbable splints that have saved the life of infants, The Feinstein Institute’s research combined two emerging fields: 3D printing and tissue engineering. Tissue engineering is like other kinds of engineering, except instead of using steel or computer code to make things, living cells from skin, muscle or cartilage are the raw material. Already knowing how to construct cartilage from a mixture of cells called chondrocytes, nutrients to feed them and collagen, a 3D printer can craft scaffolding, which can be covered in a mixture of chondrocytes and collagen, which then grows into cartilage.

“Making a windpipe or trachea is uncharted territory,” noted Goldstein. “It has to be rigid enough to withstand coughs, sneezes and other shifts in pressure, yet flexible enough to allow the neck to move freely. With 3D printing, we were able to construct 3D-printed scaffolding that the surgeons could immediately examine and then we could work together in real time to modify the designs. MakerBot was extremely helpful and consulted on optimizing our design files so they would print better and provided advice on how to modify the MakerBot Replicator 2X Experimental 3D Printer to print with PLA and the biomaterial. We actually found designs to modify the printer on MakerBot’s Thingiverse website to print PLA with one extruder and the biomaterial with the other extruder.”

Demonstrating the cost-effectiveness and efficiency of Atmel based desktop 3D printers, The Feinstein Institute had previously sought out a number of machines that could extrude living cells; however, such devices run upwards of $180,000. This would be fine and dandy, except for the fact that the researchers hadn’t even proven the concept nor confirm it would indeed be a viable option. Luckily, the MakerBot Replicator 2X Experimental 3D Printer only set them back $2,500.

“The ability to prototype, examine, touch, feel and then redesign within minutes, within hours, allows for the creation of this type of technology,”  said Lee Smith, MD, Chief of Pediatric Otolaryngology at Cohen Children’s Medical Center. “If we had to send out these designs to a commercial printer far away and get the designs back several weeks later, we’d never be where we are today.”

Originally, the team thought that a special PLA would be required in order to maintain sterility and be dissolvable within the body. However, in light of time, they decided to try regular MakerBot PLA filament. Through testing, Goldstein found that the heat from the extruder head sterilized the PLA as it printed, so he was able to use ordinary MakerBot PLA Filament. 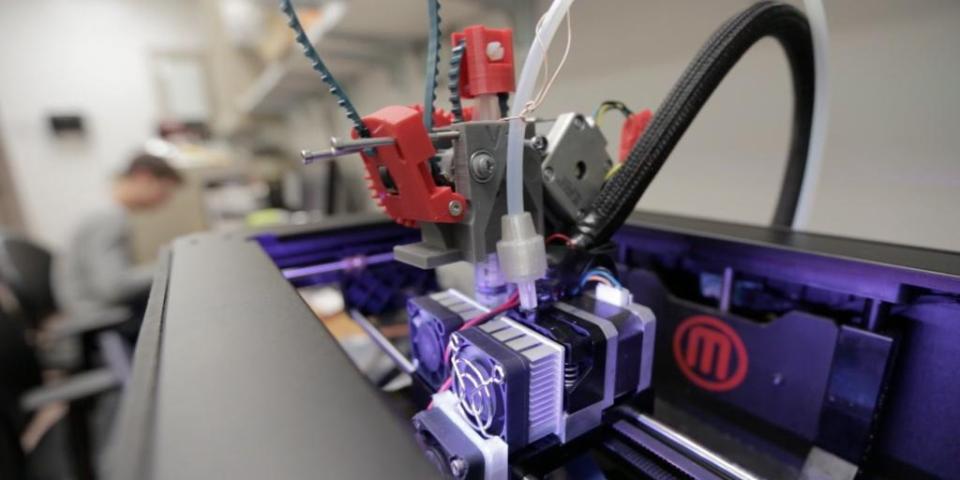 The process consisted of extruding bio-ink he bio-ink to fill the gaps in the PLA scaffolding, which transforms into a gel on the heated build plate. Once the bio-ink adheres to the scaffolding, it goes into a bioreactor to keep the cells warm and growing evenly.

“The research being done at the Feinstein Institute is exciting and promising,” noted Jenny Lawton, MakerBot CEO. “We are continually amazed by what is being created with 3D Printers. To know that a MakerBot Replicator 3D Printer played a role in a potential medical breakthrough is inspiring.”

The results of the study illustrate how the 3D printed windpipe or trachea segments held up for four weeks in an incubator. According to Mr. Goldstein’s abstract, “The cells survived the 3D printing process, were able to continue dividing, and produced the extracellular matrix expected of tracheal chondrocytes.” In other words, they were growing just like windpipe cartilage.

While the work still remains a proof-of-concept, the researchers still have their work ahead of them before establishing a new protocol for repairing damaged windpipes. According to Dr. Smith, at least one patient comes through the North Shore-LIJ Health System each year who can’t be helped by the two traditional methods. What’s more, he expects in the next five years to harvest a patient’s cells, grow them on a scaffolding, and repair a windpipe. This customized approach may prove to be especially useful for treating children.

“Do you remember the Six Million Dollar Man?” Dr. Grande asks. “The Bionic Man is not the future, it’s the present. We have that ability to do that now. It’s really exciting.”

The Maker Movement has used Atmel powered 3D printers, ranging from MakerBot to RepRap, for quite some time now — but it is abundantly clear that the next-gen technology is quickly entering a new and important stage. Interested in learning more? You can read all about the project on MakerBot’s official blog, as well as watch the video below.