Charles Buxton once said, “In life, as in chess, forethought wins.” Somaiya College’s forethought with their automated chess design provides a clear winner for all parties involved. The automated chess table includes braille pieces, voice recaps of every move, and textural contrasts between white and black spaces. The combination of all these factors allows the game to be utilized by those who suffer from visual impairments.

“There are already board games available in the market that can be used by the visually-impaired, but our board game involves technology that allows one to play the game online as well as on a physical board. The board automatically plays the moves depending on the keys pressed,” explains Gaurang Shetty, Head of the College’s Innovation Center.

The web connectivity of the project enables individuals to play each other from across the globe as the game board provides the player with a Graphical User Interface (GUI) over the Internet, so one person can play over GUI sitting in any corner of the world, while the other plays on the physical chess board.

At the heart of the 64-key membrane keyboard lies an Atmel-powered Arduino that allows the board to communicate with a connected computer. The team behind automated chess will be demonstrating their board at Maker Faire Rome next month.

“While the project is ready, we are also trying to incorporate other features to this chess board for even better results,” Shetty concluded.

Maker Faire Rome and World Maker Faire New York may be behind us, but Atmel is by no means finished making a big deal of the Maker Movement this year!

In fact, milling around with the most passionate (oddly dressed) people on the planet only ever serves to galvanize us to put that extra dash of passion into everything we do; into every chip and kit we produce. That’s because somewhere out there is a Maker who will take our kits or chips and build a 3D printer with them, or a nippy little vision sensor robot, or even a smart toilet (yes, seriously)!

It’s always easy to appreciate a finished product, of course. But us Atmelians know that it’s the components that allow people’s designs to really shine… much as a first class meal is only as good as the ingredients used.

Our secret ingredient, of course, is AVR; the little chip that can do big things and create infinite possibilities. 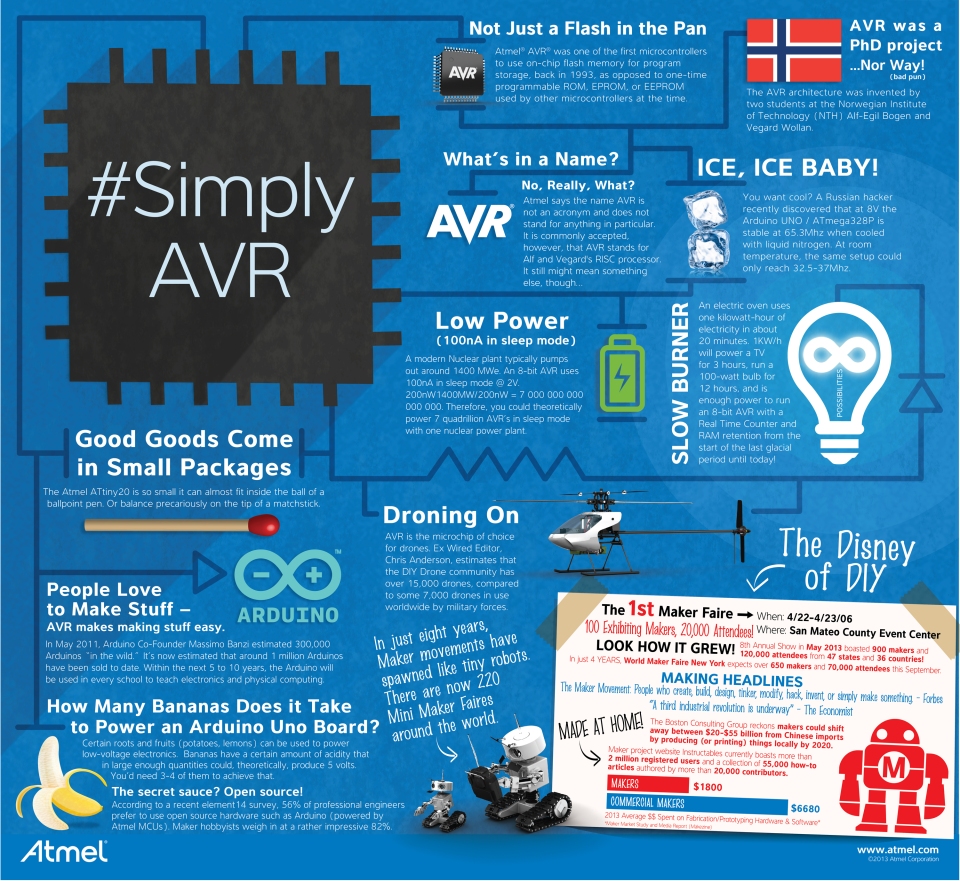 AVR was one of the first microcontrollers to use on-chip flash memory for program storage, pushing the envelope early on. Starting out as a PhD project in Trondheim, Norway, the technology has come a long way, both literally and figuratively!

Available in the tiniest of packages (the ATtiny20 is so small it can almost fit inside the ball of a ballpoint pen) and so low-power it makes Sleeping Beauty look like a fitness instructor, AVR has wowed makers from the get-go.

That’s why AVR was the first choice chip for Maker favorite Arduino. It’s now estimated that around one million Arduinos have been sold to date, and within the next 5 to 10 years, the Arduino will be used in every school to teach electronics and physical computing.

Not to mention how many quadcopters and crazy looking drones AVR powers. Ex Wired Editor, Chris Anderson, estimates that the DIY Drone community currently boasts over 15,000 drones, compared to just 7,000 “professional” drones in use worldwide by military forces. Power to the people, so to speak!

Is it any surprise Atmel almost bursts with pride whenever we find a new AVR project to tout? We’ve even created our own award for Makers with the most creative AVR vision (you’re free to submit your own projects, check out others or just vote for your favorites until the end of December!)

We hope you enjoy some of the fun facts we’ve dug up for our Maker AVR infographic even half as much as we enjoyed making it! Keep creating, folks!