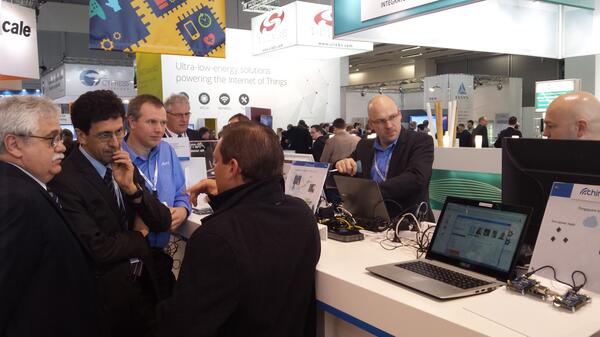 “Our customers are demanding complete, easy-to-use IoT solutions that can quickly bring a full system to market,” said Pedersen. “Our cooperation with Thingsquare is an example of that, with a web-based toolchain and open source firmware to offer our customers a fully integrated hardware and software solution for various IoT applications.”

Recently, a Thingsquare rep told Bits & Pieces that a number of engineers and Makers are choosing the SAM R21 and the Thingsquare system to build secure and future-proof Internet of Things (IoT) applications and connected devices.

“The Thingsquare system and the SAM R21 SoCs follow you throughout the entire process from idea to market,” the rep explained.   ”The system supports IPv6 / 6lowpan, wireless mesh networking, firmware updates and end-to-end encryption. You can also easily build smartphone applications to interact with your SAM R21-powered devices.”

Interested in learning more? To quickly set up a prototype, you can use the Thingsquare system with SAM R21 Xplained Pro boards, as described here. Of course, Thingsquare can also help with your entire software project as well.

“Our customers are demanding complete, easy-to-use IoT solutions that can quickly bring a full system to market,” said Pedersen.

“Our cooperation with Thingsquare is an example of that, with a web-based toolchain and open source firmware to offer our customers a fully integrated hardware and software solution for various IoT applications.”

Interested in learning more? The SAM R21 device combined with the Thingsquare open source firmware is currently available at http://thingsquare.com/tech/ and as a separate delivery via Atmel’s Studio 6 Gallery.

According to Hans Scharler, President, Software at ioBridge, the low-cost ZigBee gateway provides simple and seamless wireless connectivity to connected home products such as door locks, garage doors, lighting, and sprinkler systems – making them accessible from any smartphone or Internet-connected device.

“Locking and unlocking your front door with your phone will be as commonplace as using your keys in the next few years,” said Scharler. “Integration with connected home products and the mobile phone is leading the Internet of Small Things revolution.”

The RealTime.io Platform for the IoT allows any device to connect to cloud services and mobile phones to provide control, alerts, data analytics, customer insights, remote maintenance and feature selection.   Manufacturers deploying ioBridge’s technology will be able to quickly and securely bring new connected home products to market while slashing their cost-per-connected device.

“For more than a decade, connecting ZigBee sub-networks with the Internet has been a major challenge,” said Magnus Pedersen, Marketing Director of MCU Wireless Products, Atmel. “ioBridge’s technology is amazingly fast and a great match for low-latency wireless applications such as lighting, security and sensors where low-power, tenacious link-quality and instant access are essential.”

Analysts at ABI Research say there will be a “major surge” in RF technology adoption for remote control devices in the consumer market over the next five years.

“Over the last five years there has been an upswing in technology development and a rise in the need to make home consumer devices smart that has led to resurgence in using RF,” Cooney explained.

“Initially, proprietary RF technology was used but equipment vendors have been quick to understand the benefits of using a standardized RF technology in remote control design.”

“Over 3.2 billion remote controls will be shipped from 2013 to 2018 with flat panel TVs, set-top boxes, DVD/Blu-ray devices and games consoles alone,” he added.

And that is why Atmel is helping the stalwart remote control evolve beyond the confines of infrared. As Director of Atmel Wireless Solutions Magnus Pedersen notes, the humble TV remote control has provided us with a convenient, yet unengaging, means of controlling our televisions and AV equipment for dozens of years.

“Bringing ultimate entertainment control to the holder, the infrared remote has changed little in that time despite the controlled technology making immense leaps,” he said.

“[However], as the use of RF-based controls gathers momentum, developers have a number of key design considerations to factor into their approach and how to select the components needed.”

Interested in learning more? Be sure to check out Atmel’s extensive wireless/RF portfolio here.