The Loon Copter looks like something out of James Bond.

It’s in our nature to be curious, so it comes with no surprise that there have been a lot of excitement surrounding commercial drones. Drones open up the skies for ordinary people to explore the land from above and if the history of human innovation has taught us anything, it’s that we have the tendency take something great and make it even better. Researchers from Oakland University’s Embedded Systems Research Laboratory have done just with Loon Copter, the first aerial and underwater drone. 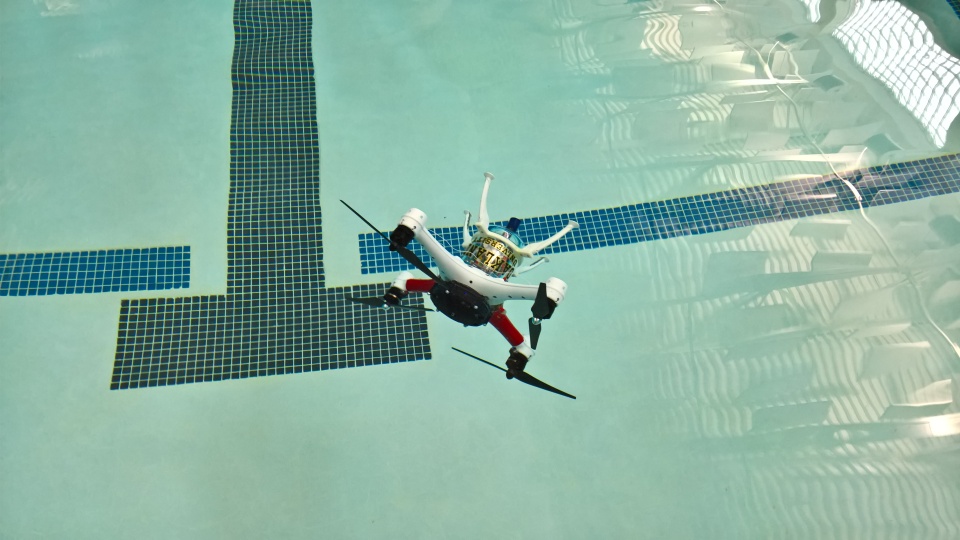 The Loon Copter has the body of a conventional quadcopter, but the cylinder that hangs below the air frame is what truly gives it the unique capabilities. The cylinder, when filled with air, changes the drone’s bouyancy so it can transition from flight to floating on water. The cylinder also can fill up with water and sink, allowing the drone to dive. The four propellers used for flying in the air, is also for navigating in the water. The drone can seamlessly return to flight by pumping out the water. Sounds like something out of a James Bond movie right? It’s not too far-fetched as the Loon Copter’s design can be adapted for search and rescue applications, or marine research.

The Loon Copter is one of the 10 international semifinalists in the 2016 Drones for Good competition, which received 1,017 entries from 165 countries. Dr. Rawashdeh and his team will be in Dubai from February 4-6, 2016 competing for the grand prize of $1 million. Learn more about the Loon Copter and the team’s work by visiting their website.