Now that’s what we call doin-knit-yourself!

Circular knitting is a form of knitting that creates a seamless tube. In recent years, knitting in the round has gained tremendous popularity among crafty DIYers, particularly those hoping that the rhythmic click of needles and repetitious weaving of yarn would alleviate some stress. For other hobbyists, the joys of knitting lie in the process of designing an automated machine to do the tedious task for them, as seen with the Maker duo of Varvara Guljajeva and Mar Canet who have developed an open source circular knitting machine, aptly named Circular Knitic. 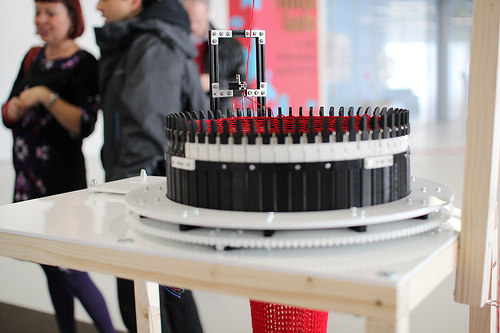 Though digital knitting may not exactly be a form of additive manufacturing, the project does share a number of commonalities with 3D printing. As 3D printers continue to gain mainstream appeal, the fashion industry has become one of, if not, the quickest to adopt the next-gen technology. In fact, many designers are slowly introducing FDM printing into their prototyping labs, with several others already having fully-embraced these devices as a fashion tool — evident by the accessories seen throughout Eureka Park back at CES 2015 and dresses taking the runway at Fashion Weeks across the world.

Initially built for a program called DOERS, which was curated by Arduino co-founder David Cuartielles, the open source machine was constructed using a series of RepRap, MakerBot and Ultimaker 2 printers for most of its components, along with some digital fabrication, laser cutting and MakerBeam. Much like the tool we saw last year that was capable of threading pieces of attire, the OpenKnit, Circular Knitic is also powered by an Arduino — an Uno to be exact (ATmega328).

The brainchild of artists Varvara Guljajeva and Mar Canet, these desktop-sized machines are currently being commissioned to create long scarves at Etopia Center for Art & Technology in Zaragoza, Spain through July 31, 2015.

Similar to how a RepRap FDM printer extrudes plastic in various shapes, the Circular Knitic produces specific patterns of wool to form woven strands of clothing, ranging from scarves to gloves to keep you warm this winter. Even better, since its creators have made the files available on GitHub, users can simply 3D print and assemble the desktop device at home to make their own garments without having to ever head out to the store! 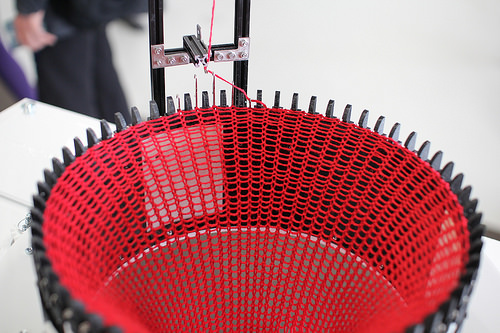 “Fab Labs and Makerspaces are a lot about hard-surface object production. At the same time, the first digital fabrication tool, which is an electronic knitting machine back to 1976, has been forgotten and discontinued. Hence, with this project, Circular Knitic, and our earlier one called Knitic, we aim to integrate textile fabrication to the Makers’ culture.”

Interested in starting your own in-home knitting factory? You’re in luck. The Maker duo has provided a step-by-step breakdown of the build on Instructables, in addition to having submitted their project as a contender for this year’s Hackaday Prize. Want to see more photos? Guljajeva and Canet have shared an entire album here.

Knitic can best be described as an open source project designed to improve control of electronic knitting machines via an Arduino-based platform. Essentially, it facilitates the easy creation and modification of complex patterns on the fly.

According to the Arduino blog, the Knitic kit comprises an Arduino Due along with a DIY printed circuit board connected to the electronic parts of the original machine. As expected, software is used to regulate needle operation.

“Arduino is A and B in our work. It means we use Arduino for many purposes, and to be honest, we [can’t] imagine our lives without it. We applied Arduino already in our first hack of knitting machines, when floppy emulation script didn’t work for us, since we had 940 and not the 930 machine, ” explained Varvara & Mar, the duo who developed Knitic.

“Hence, we connected all buttons of knitting machine keypad to Arduino and were able to program knitting machine automatically. [Clearly], Arduino [plays] a key role, because it [processes] the sensor output, energizes the [correct] solenoids according to the pattern and communicates with [our] Knitic program written in Processing.”

As previously discussed on Bits & Pieces, the Arduino Due is a microcontroller board  based on Atmel’s SAM3X8E ARM Cortex-M3 CPU. The board boasts 54 digital input/output pins (of which 12 can be used as PWM outputs), 12 analog inputs, 4 UARTs (hardware serial ports), a 84 MHz clock, an USB OTG capable connection, 2 DAC (digital to analog), 2 TWI, a power jack, an SPI header, a JTAG header, a reset button and an erase button.

Additional information about the open source Knitic can be found here.