Designed by math teacher Dan Alich, the Atmel-based DuinoKit Essential Project (DEP) is a cost effective development system for aiding the learning of electronics and programming.

The DuinoKit, which recently made its Kickstarter debut, includes all components necessary to build numerous projects, as well as easy to understand diagrams and part specifications. 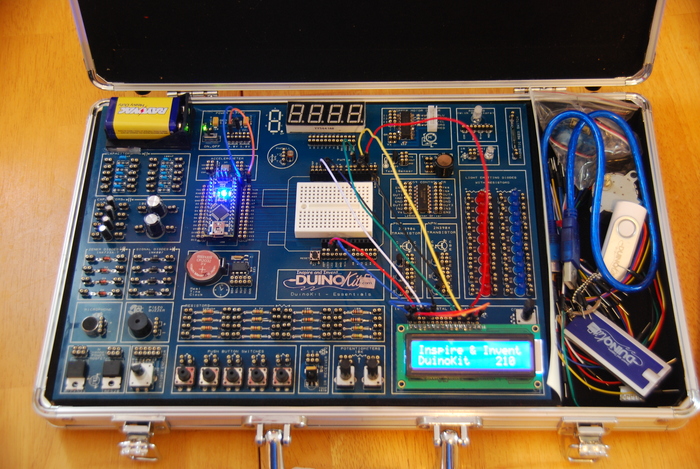 According to Alich, potential DEP projects include:

“I have developed this kit as a safe and easy method of learning electronics and programming. After gaining a little experience in electronics, users will be able to move the projects away from the kit and build them into a stand-alone project,” Alich explained. 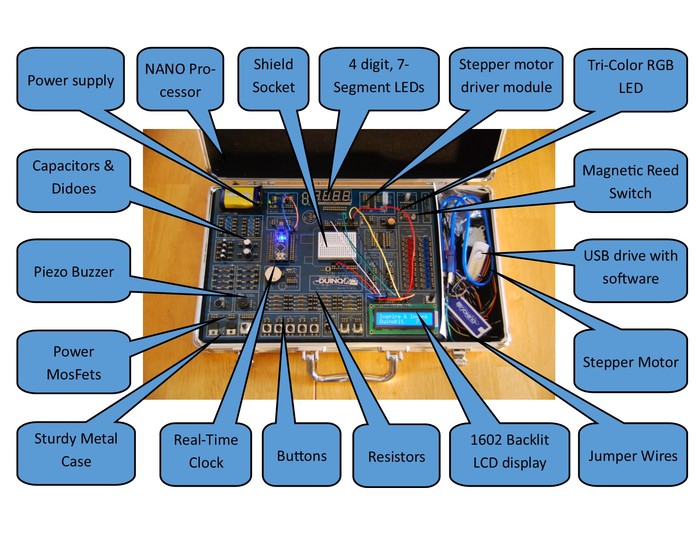 “With this kit you will learn how to read and gather data from input sensors (such as an acceleration sensor, light sensor or temperature sensor), process this data and interact with various other output devices (such as LEDs, Liquid crystal displays and the serial port on your computer). When these skills are combined, the number of projects and ideas are virtually limited only my ones imagination.” 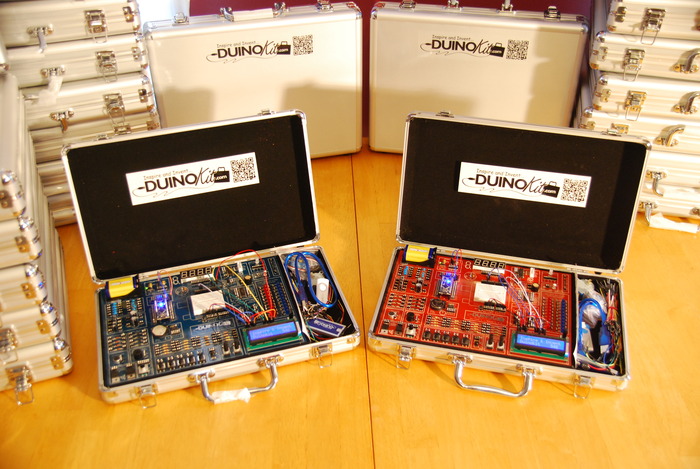 Back in May, Dan Royer of Marginally Clever debuted an open source 3-DOF palletizing robot based on the commercial ABB 460. The unit is now available on Tindie as a kit for $350.

According to Royer, the ‘bot is powered by two Adafruit motor shields, an Atmel-based Arduino Uno (ATmega328 MCU) and gcodecncdemo (software).

“[Essentially], this robot is an affordable, scaled-down model that is perfect for classroom based training on the mechanics and operations of a robot arm,” said Royer.

“[It boasts] three degrees of freedom – reaching up to 50cm away from its body. It runs on stepper motors and gearing for great precision. The lifting capacity is approximately 125g fully extended and 155g in a retracted position.”

Interested in learning more? You can check out the official 3DOF Robot Arm page on Tindie here.

According to Smith, the prototype takes approximately 7 – 10 hours to build with simple tools. Cost of components are estimated at around $500 (new), although used parts can be snapped up for even less on eBay.

In his Instructables post, Smith lists 8 primary steps for the build:

If you are short on time, Smith will also be offering an open Bitcoin ATM kit sometime in the near future.

Interested in learning more? You can check out the project’s official page here and the recent Instructables post here.

A recent Electronics Weekly article penned by Chris Sullivan of Premier Farnell confirms that development kits such as Atmel’s stalwart STK600 are becoming more and more popular outside of the professional engineer’s workspace.

“Development kits have expanded in terms of their function and range of application, as well as their price point,” Sullivan explained. “Many manufacturers are now developing lower cost base boards and allowing users to choose which type of product or additional functionality they need by adding on accessory boards that are designed to ‘plug’ into the baseboard.”

“The AVR device connects to the STK600 using a routing and socketcard sandwich system which routes the signals from the device to the appropriate hardware,” an Atmel engineering rep told Bits & Pieces. “The system consists of a generic socketcard, on which the AVR device is inserted, and a device specific signal routing card, which routes the signals from the socket pins to the different functions on the STK600 main board dependent on the device.”

According to the engineering rep, this design significantly simplifies hardware setup when switching from one AVR device to another, since all connections from the device to the motherboard are determined by the routing card – a custom board for each device.

“Meaning, the routing system is purely passive; no electronic components route the signals, so all I/O pins are directly accessible on the connectors with no altering of the electrical behavior,” the engineering rep continued.

In addition, the kit offers access to all device pins, along with several useful hardware functions such as pushbuttons, LEDs, and dataflash to create a complete system for prototyping and testing new designs. Plus, free AVR Studio/AVR32 Studio allows devs and Makers to write and compile firmware in either Assembly or C (downloading the code to the target AVR device).

Last, but certainly not least, the board is equipped with an adjustable voltage supply and adjustable clock. As such, the VCC level and clock frequency can be adjusted on the fly from AVR Studio/AVR32 Studio, offering users the ability to test the performance at different voltage levels and clock frequencies with just the click of a button.

Interested? The STK600 can be ordered from Atmel’s official store here.