TinkerBots is an Atmel-powered (ATmega328P) building set that enables Makers and hobbyists of all ages to easily create an endless number of toy robots that can be brought to life without wiring, soldering or programming.

“The inspiration for TinkerBots grew out of my lifelong fascination with LEGO toys. Tasked with building a ‘Dream Machine’ for my master’s thesis in product design, I thought it would be cool to create a construction kit that is as simple to use as LEGOs but has the ability to easily add robotics and make toys that move and do things,” inventor Leonhard Oschutz, creative director and co-founder of Kinematics GmbH, explained.

“It was music to my ears when a child described TinkerBots as being like ‘living LEGOs.’ With our TinkerBots building set, you’re not getting just one robot, you’re getting the ability to build any type of toy robot that you and your children can imagine.”

According to Oschutz, the centerpiece of the TinkerBots building set is a square, red “Power Brain” module (approximately 1.5”x1.5”x1.5”) that contains Atmel’s ATmega328P microcontroller (MCU). This module is tasked with providing wireless power and data transmission to kinetic modules such as motors, twisters, pivots and grabbers.   Aside from Atmel’s ATmega328P MCU, additional key specs include:

“Children can build anything they can imagine, such as a dog that walks, a snake that slithers, a bug that crawls or a tractor that digs,” said Oschutz. 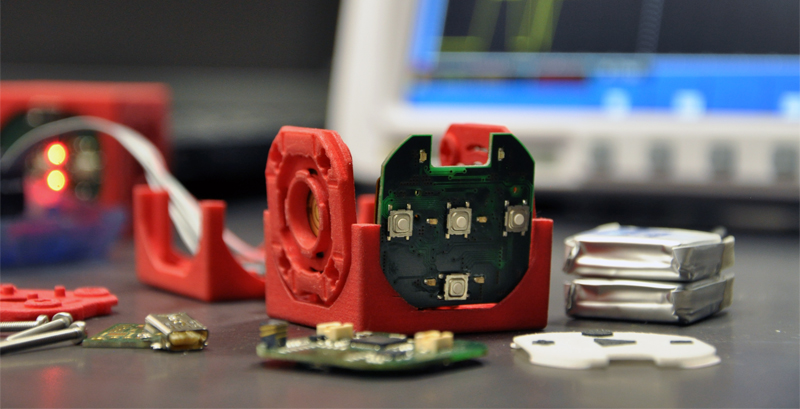 “Small building blocks and other shapes such as rectangles and pyramids without electronics inside them are passive pieces that can be used to customize TinkerBots toy robots.”

Controlling TinkerBots robots is as easy as it is to build them. An integrated record-and-play function on the “Power Brain” module enables Makers to teach their robots what to do and bring them to life. To be sure, users only need to take their creation in their hands, press the record button and move their robot in the way they want it to move.   When a user puts it down and pushes the play button, the toy robot will repeat over and over exactly what it just learned. The next time, Makers can teach the ‘bot something completely new, or start all over to build an entirely different robot using the same TinkerBots pieces. As expected, TinkerBots robots can also be controlled remotely via a tablet or smartphone with the TinkerBots app.

The basic TinkerBots building set is packed with three active modules: the “Power Brain,” motor and pivot modules. Passive pieces include two cubes and two adapter plates for LEGO bricks, along with a USB charger. More advanced robots are slated to offer additional components such as an infrared distance sensor.   Last, but certainly not least, TinkerBots’ use of Atmel’s ATmega328P allows more experienced enthusiasts to dabble in Arduino IDE programming for their TinkerBots creations.

Preorders for TinkerBots are currently being accepted on Indiegogo, with shipping scheduled to kick off in the fourth quarter of 2014. General availability is slated for second quarter 2015, with retail pricing beginning at $159.

Interested in learning more? You can check out the project’s official Indiegogo page here.