“What really makes the Kanega Watch different is that it goes where you go, both inside your home and away. It is discreetly styled, so there’s no stigma from wearing an assistive device, and it speaks to you in words.”

In this interview, we feature Jean Anne Booth, a serial entrepreneur with a successful track record in hardware innovation, having previously launched and sold two large and notable companies. Her current project is UnaliWear, a wearable health technology startup that has recently made its Kickstarter debut. She comes with a wealth of experience, and her timing could’t be better as the wearable digital health market continues to unfold. What’s more, Kanega Watch — which we recently featured on Bits & Pieces — is looking to bring a much-needed vision for practical usage to that space.

Tom Vu: What’s the main driver to going about this once again? Well, considering you did this before as the first person to launch the ARM Cortex-M3 at Luminary Micro?

Jean Anne Booth: Great question! I actually retired for a couple of years after I sold my last company to Texas Instruments. During this period, my mom turned 80, and she had a couple of incidents that made me start looking for a personal emergency response system for her. Many of the assistive devices available are flawed in one aspect of another. Most importantly, there are three reasons, which make them quite hard for seniors to desire to integrate into their lives. First, they are ugly. Secondly, if they have connectivity, the devices usually require some complicated installation of a tethered smart phone or access point. And one of the most overlooked objections, there is a big “HELP” button. This big button is quite visually disturbing. When you see the big “HELP” button made large for usability and functionality, it is so socially stigmatizing. I wanted my mom to live safely while being independent and not being socially stigmatized.

TV: How is the UnaliWear Kanega Watch different from other wearable tech?

JAB: Focus groups have called Kanega Watch a ‘wearable OnStar for seniors’ because we provide discreet support for falls, medication reminders, and a guard against wandering in a classically styled watch that uses an easy speech interface rather than buttons. What really makes the Kanega Watch different is that it goes where you go, both inside your home and away. It is discreetly styled, so there is no stigma from wearing an assistive device, and it speaks to you in words. The watch brand name “Kanega” is from Cherokee for “speak”.

TV: Is what you’re creating really going to make our lives better?

JAB: Yes, it’s about being there when it counts. You can wear Kanega Watch on 24×7 basis, so you don’t forget to put it back on, and therefore you’re wearing when you need it. There is a very long battery life, unlike an Apple Watch, Android, or Samsung smartwatch. There is no need for an additional device, either an access point or a smartphone. For seniors, or those who are independent but vulnerable, it can help with issues at night like trips to the bathroom. It’s waterproof, not just water resistant, so you can wear it in the shower/bath (this is where a majority of falls happen), and also in your pool exercises. It works anywhere you go, and those who are vulnerable are not trapped at home. Importantly, there is a convenience to this as you’re wearing everything you need to stay safe.

For instance, here is one of the fundamental characteristics of how the watch works, and why our tagline is “Extending Independence with Dignity.” If the Kanega Watch wants to speak, it will ask permission first. It requests permission to speak by buzzing on the wearer’s wrist like a cellphone on silent, so there’s no visual or audible stigma of wearing an assistive device when socially inappropriate — like at church.

If it detects a potential fall, it will ask if you will need help, because two out of three falls do not require help. In fact, Kanega Watch will continuously monitor you – a kind of continuous welfare check. In a suspected fall, if you don’t respond to the request for permission to speak (for example, if you’re unconscious, unable to move, or unable to speak), then it will begin to escalate and then notify emergency and your contacts for help. There’s practical and smart logic built into the wearable.

TV: How has your experience in this industry going to help in fulfilling the practical/adoptable use of moving wearable tech toward broader acceptance/use?

JAB: To me, it’s not about advancing a category of technology. It’s about harnessing technology to solve real problems, and in this case, about allowing people to live independently, safely, for as long as possible. It’s been an interesting experience transitioning from semiconductors to healthcare, and has proven to be very rewarding building products that directly make people’s lives better. It’s a fantastic feeling!

TV: What hardware startups do you think are actually doing some really interesting things right now?

JAB: That’s a hard question for me because I’m biased toward products that make a difference and are directly useful. Often what is the most cool and interesting is not at all useful! One thing that our Kickstarter campaign has taught us is that the average person buying things that are cool is not quite in the same category as the people who would buy our wearable for seniors.

TV: How would you describe your team?

JAB: Today, our team consists of a cadre of three founders. Our CTO Marc DeVinney does all the hardware. Brian Kircher, who I’ve worked with for 14 years, does all the software for the Kanega Watch. I do everything else.

TV: Who do you look up to as a mentor now?

JAB: Jimmy Treybig, founder of Tandem Computers, has been a close friend for years and has always been helpful. Jimmy has been a source of a lot of wisdom. For this particular company, another extremely important mentor is my mother, Joan, who is also our Senior User Experience Advisor. She’s put together a number of focus groups, and has also been a lot of help in detailing the use cases. 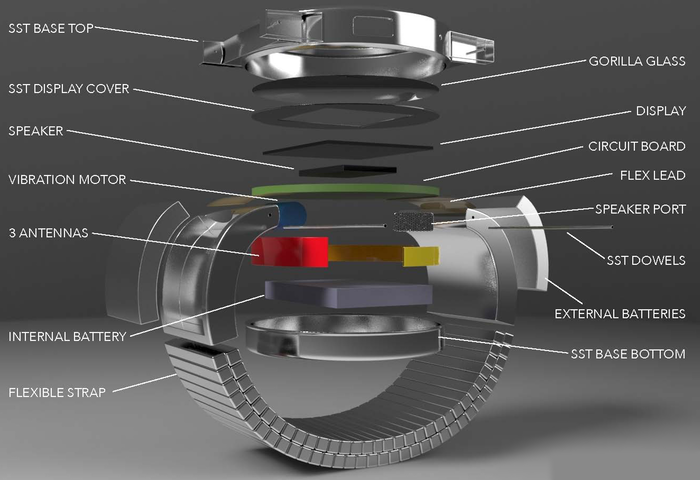 TV: What improvements will your product provide society? Perhaps even help the movement of IoT, connected things and wearables?

JAB: The Internet of Things promises to transform daily life, making it easier to work, shop, merchandise, exercise, travel and stay healthy. Really, thanks to billions of connected devices — from smart toothbrushes and thermostats to commercial drones and robotic companions for the elderly. It also will end up gathering vast amounts of data that could provide insights about our habits, religious beliefs, political leanings, sentiments, consumer interest, sports, and even as far as go to other highly personal aspects of our lives. I think the maturation of IoT and wearables is intertwined together. In some respects, what we are building at UnaliWear is also helping cement together the more meaningful adoption of wearables. In our particular case with the Kanega Watch, we couldn’t solve our user problem unless we could provide a better wearable device that is constantly connected all the time. Ultra-low power is very challenging fundamental backstop for every wearable device, and for most IoT devices as well. Our wearable includes cellular, GPS, and Wi-Fi built into one seamlessly integrated non-obtrusive wearable.

Our design goal for the Kanega Watch is that it must be wearable 24×7. It cannot be in a pocket or have requirements of being tucked into a purse. It also must have enough communications capability so that a senior is not stuck in their home all the time. To meet this goal, we have a unique patent-pending quick swap battery system enabling a user to not have to take the watch off to charge. The wearable can last 2 days for most users, and it comes with four batteries. It’s designed to have two batteries available on the charger and two batteries on the watch at all times. The device eliminates the need to be near a base station or smartphone.

Today, simply using built-in smartphone or app presents a couple of problems. Most seniors today don’t have nor operate a smart phone. Less than 5% of seniors over 80 years in age have a smart phone today. For the few seniors who do have smart phones, there are still problems using a smart phone for falls and reminders, because today’s smart phones still have only about 10 hours of real usage time per day.

TV: By 2050, what are some of your predictions for consumers or users interacting with technology on a day-to-day basis?

JAB: I do think that speech will definitely play a larger part in our interaction paradigm. Remember that popular Star Trek movie scene where they come back in time to save the whales and Scotty goes with Checkov to analyze the strength of the materials being used to make a housing for the whales, and the computer he is given is the original Macintosh. Scotty speaks to the Mac, Checkov reminds him that’s not the interface, and then Scotty picks up the mouse and speaks to the mouse. This seems to show a natural interface into the future as Scotty mistakes the old computer for one he can easily and naturally talk to. Now looking at where we are today – the senior population is the fastest growing population segment in the US, and by 2030 will be 20% of our total population. Today, there are 17 million seniors above the age of 75 who are living independently, yet only 2.2 million of those independent seniors have any kind of monitoring system to get help. Today’s 17 million seniors will burgeon to 27 million seniors by 2030. Natural speech interfaces and connectivity will be control what we’re able to build in the future.

TV: What question might you pose to someone in the middle of making a choice to purchase or carry something that is connected and electronically enabling for a senior in their lives?

JAB: I think the message is simple. We show over and over again that if you want to extend the time and quality of someone’s life, then extend their independence. That means you need products that a senior is willing to wear, and that fits into their active lifestyle. At its core, the wearable is based on an Atmel | SMART SAM4L Cortex-M4 MCU running FreeRTOS as the real time operating system and also includes the ATWINC1500 SmartConnect device for Wi-Fi. The Kanega Watch includes both Wi-Fi and cellular communications; when you’re at home, it uses your Wi-Fi. When you’re away, it transitions seamlessly to cellular.

TV: Does the Kanega Watch have initial roots from the Maker Movement?

JAB: Yes, the roots are definitely Maker Movement – and also a lot of rapid prototyping (hardware’s version of the Lean Startup). We built our first industrial design prototypes at the TechShop in Austin, and our very first alpha design used a 3D-printed “box” as the “watch”. We make a lot of prototypes with rapid turn 3D-printing and CNC-machined aluminum. Before we built our own first prototypes, we created a software prototype on the Omate TrueSmart smart watch, which has dual 1.3 GHz ARM Cortex-A8’s running Android 4.0 “Ice Cream Sandwich.” Our only challenge with this prototype is that the battery life was an unsatisfying 5 hours – which meant that I had a battery pocket in my pocket and kept the watch plugged in with a cord hidden under my shirt when I needed to demonstrate over a long period, such as at a conference like SxSW. I like our current prototypes better!

Interested in learning more or have an elderly family member who could benefit from the Kanega Watch? Head over to UnaliWear’s current Kickstarter campaign here.