Developed by Ph.D. candidates Aisen Carolina Chacin and Takeshi Ozu at Japan’s Tsukuba University, IrukaTact is a submersible haptic glove that enables users to “feel” objects that are just out of reach in underwater environments. A wearable such as this could prove to be useful in scenarios where there’s limited visibility, like sinkholes or flooded streets.

Inspired by the dolphin, IrukaTact (‘iruka’ means ‘dolphin’ in Japanese) employs echolocation to detect sunken objects, and translates solar signals into haptic sensations in the form of pulsing waterjets. The closer a wearer’s hand gets to the targeted item, the greater the pressure that’s exerted onto either the index, middle or ring finger.

The thumb and pinky are left free in order to reduce clunkiness, save battery power and improve movement. IrukaTact itself is fairly compact and unobtrusive, which lets a user easily pick up and grasp things once they’ve been found.

Initially designed as a kit for hazardous situations, IrukaTact is open source and can be built using off-the-shelf materials and 3D printing. The glove is based on a MaxBotix MB7066 sonar sensor, three small motors and an Arduino Pro Mini (ATmega328), and is programmed to send signals to the three middle fingers in silicone thimbles. 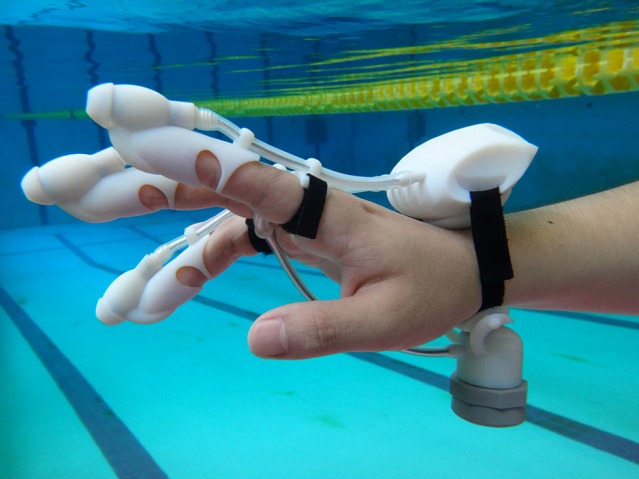 The motors are placed on top of each digit and collect water from a surrounding environment to create pressure feedback. Meanwhile, a silicone ring around the middle finger — which is connected to the MaxBotix sensor at the wrist by a small tube encasing the wires — keeps the sensor parallel with the hand and allows it to read information from whatever direction the palm is facing.

At the moment, the sensor can receive and send signals from up to two feet, but its creators hope to extend that distance in the near future. Beyond just an aid for rescue workers, the glove could also be paired with a device like Oculus Rift and outfitted with gyroscopes and accelerometers to emit haptic feedback in virtual reality.

Intrigued? Head over to the IrukaTact’s page here, or watch its demo video below!