“I had this old Philips radio laying around that I couldn’t use because it only had an AM receiver. So, I thought it would be cool to make it into an iPhone dock,” Dahl explained in a blog post published on Build-Electronic-Circuits.com.

“The first thing I did was to remove old the old parts from it. Then I cut out the front of an old speaker and replaced the original speaker element. The reason for this was that the original element didn’t have any bass at all.”

According to Dahl, a Fiio L11 was used to dock the iPhone and enable sound – amplified via a TEA2025 amplifier circuit which provides 2.5 watts of power.

“I made the display by drawing it on my computer, then printing it out on a sheet of paper placed behind a plastic window. I used LED’s on the back to indicate volume and source selection. The LED’s [are] controlled by an Arduino Duemilanove,” said Øyvind.

Additional information about the modded antique radio can be found here, while the relevant Arduino sketch is available here.

Pebble may have caused a splash in the watch-tech space, but Secret Labs and the House of Horology are about to make an even bigger one, with the Agent smart-watch.

Kicking off on Kickstarter today, the campaign promises to bring together a “fusion of New York fashion and cutting edge technology.” But of course, it would say that, wouldn’t it?

So, cutting through the hype, what’s actually cool about it?

The first thing that stood out to me, was the wireless charging aspect. That’s a big differentiator that sets the Agent apart from the competition, because it means the watch doesn’t have a USB port on it, allowing it to be properly waterproof.

As someone who already wrecked my Nike Fuelband in the pool (what the hell is the difference between “water resistant” and “water proof” anyway?!) this is kind of a big deal! Also… wireless charging! Nikola Tesla would be glowing with pride! We keep saying we live in a wireless world, so it’s about time we had the products to back up the notion.

I also like the fact that it’s cell phone agnostic, so whether you have an iPhone, Android, or Windows Phone, you can still connect to the device via Bluetooth. Because who wants to be locked into a phone just because you have a neat watch? (I’m naming no names, you know who I’m talking about!)

Agent does all the usual things you’d expect from a smart watch; it notifies you when you receive a call, beeps at you if it realizes you’ve left your phone behind (can anyone say “attachment issues”?), allows you to add all kinds of apps, like the weather, or GPS features. And of course the watch comes in a plethora of colors, so you can be ever so subtly different (from every eighth person who owns it).

It’s the innards of the watch, however, that I think are particularly compelling. Mostly because it makes pretty excellent use of battery resources by using both an Atmel Cortex-M4 (ARM A4 processor) micro with a smaller helper micro. The faster Cortex processor runs powerful watch apps while the smaller micro takes care of housekeeping services. Power when you need it, power saving when you don’t. Which is the whole point of a “smart” watch.

The dual-bank flash also makes sure that firmware gets upgraded painlessly without ever leaving the watch in a “bricked” condition, and it also apparently boasts “redundant fail-safe recovery modes” and “independent hardware-based reset features” to ensure that misbehaving apps can’t turn the watch into a nice looking paperweight.

Because make no mistake, it is nice looking. 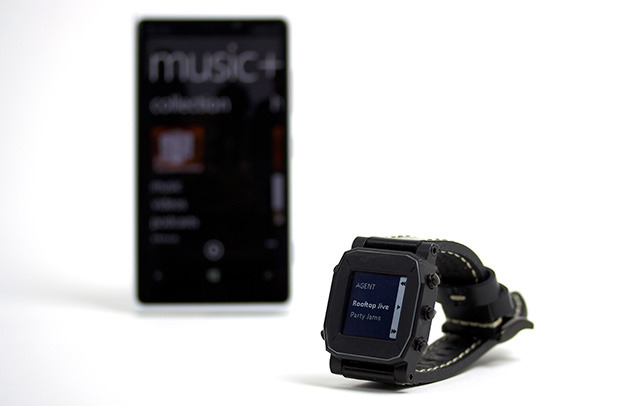 The display is probably the nicest feature, and to my mind is the crispest to date for a smart watch. It also doesn’t look quite as bulky as some other digital timepieces I’ve seen on Kickstarter.

Keeping with the low energy theme, the Agent watch also supports both classic and low energy Bluetooth and sports a rechargeable battery that can be eventually replaced.

Best of all, in my mind? It’s assembled right here in the great US of A, which the team claims will significantly speed time to market, reduce manufacturing risk and allow them to be super duper nitpicky about build standards. Not to mention it allows them to create jobs here in America, which is always a good thing. Dare I suggest… it’s about time!

If the Kickstarter goes according to plan, full production is slated to begin in December of this year. Sound good? Go on over to the project page and check out the specifics.

The Lumapad can best be described as an open source, high intensity, 8000 lumen LED lighting system built around a user-programmable Arduino (Atmel) compatible micro-controller and an (optional) electric IMP.

According to project designer Richard Haberkern, 32 ultra-bright LEDs are positioned in a landscape array to provide bright, even and controllable lighting, drawing only 88 watts. Meanwhile, a built in electronic dimmer makes the light intensity adjustable to fit just about any environment.

“This is no ordinary bright light,” Haberkern explained. “With your own custom software, you can control the light intensity, flash effects and even the color temperature via your iPhone, Android device or any computer with an internet connection. An Arduino compatible controller along with the newly available Electric IMP WiFi SD card are both built in, [so you can] control the Lumapad any way you can imagine.”

On the software side, developing for the IMP is unlike your typical embedded development environment, as there are no SDKs to install, JTAG pods, or long download time. Rather, you develop your code in a browser-based IDE, compile it and run on the IMP in under a second. And, using the Arduino compatible micro-computer, you can write multiple programs to control a scene or room lighting.

The Arduino-powered Lumapad has already reached its funding goals on Kickstarter, with 225 backers and $94,482 pledged. Additional information can be found here on Kickstarter, or the official Lumapad website.

Would you buy a device that unfolds into a tablet computer and folds back up into a flip phone? Or how about a smartphone that curls up along your wrist like a bracelet, when you’re not using it? Interesting article on 10 futuristic phone concepts. Some really imaginative ideas here that we may someday see in the market.

Which concept is your favorite? What kind of phone do you imagine yourself using down the road?