Recently, a number of industry heavyweights have taken a keen interest in the Internet of Things (IoT). Essentially, the IoT involves various nodes collectively generating a tremendous amount of data.  We know there is a strong emphasis now for the “Things being connected”.  In a small scale, a Formula 1 constructor such as McLaren uses a cluster of sensor nodes to transmit vital telemetry from the pit crew to garage, then to race engineers and ultimately back to R & D centers. During the races, this all happens in realtime. Of course, the customer in this scenario is the driver and engineering team – converging machine logs and other relevant data to ensure a vehicle runs at optimal speed.  During the races, this happens realtime; converging decisive machine log and digital data together to formulate decisive actions toward minor setting adjustments; this results in balancing the force of physics to the engine and car to produce fractions of a competitiveness in seconds.  This equates to a win in the race and competitiveness on the circuit.  Comparatively as a smaller micro-verse, this is the world of Industrial Internet and Internet of Things.

Now let’s imagine this same scenario, albeit on a global scale. Data gathered at crucial “pressure points” can be used to optimize various processes for a wide variety of applications, scaling all the way from consumer devices to manufacturing lines. To be sure, an engine or critical component like a high efficiency diesel Spark Plug is capable of transmitting information in real-time to dealerships and manufacturers, generating added value and increasing consumer confidence in a brand.

Sounds like such a scenario is years away? Not really, as this is already happening with GE and other larger Fortune 500s. Then again, there are still many frontiers to continually innovate. Similar to aviation, its more about building smarter planes, rather than aspiring to a revolution in design. Meaning, building planes capable of transmitting data and implementing actions in real-time due to evolved processes, automation and micro-computing.

Likewise, applications combined with embedded designs also yield improved output. Given the multitude of various mixed and digital signals, efficiency and computing quality factors also play vital roles in the larger system. The GE jet engine featured in one particular plane has the ability to understand 5,000 data samples per second. From larger systems down to the micro embedded board level, it’s all a beautiful play of symphony, akin to the precision of an opera. To carry the analogy further, the main cast are the architects and product extraordinaires who combine intelligent machine data, application logic, cloud and smartly embedded designs to achieve the effect of an autonomous nervous system.

Remember, there are dependencies across the stack and layers of technology even down to the byte level. This helps planes arrive at their destination with less fuel – and keeps them soaring through the sky, taking you wherever you want to go. Ultimately, a system like this can save millions, especially when you take into account the entire fleet of aircraft. It is truly about leveraging intelligent business – requiring connectivity states concerted in a fabric of communication across embedded systems. Clearly, the marriage of machine data and operational use-cases are drawing closer to realization.

“When you’ve got that much data, it had better be good. And reducing the CPU cycles cuts energy use, especially important in applications that use energy harvesting or are battery powered. And that is why Atmel offers a wide range of products mapping to more than the usual embedded design ‘digital palette’ of IoT building blocks. The market needs illustrations and further collaboration; diagrams that show what plays where in the IoT and who covers what layers,” says Brian Hammill, Sr. Atmel Staff Field Applications Engineer.

“Something like the OSI model showing that we the chip vendors live and cover the low level physical layer and some cover additional layers of the end nodes with software stacks. Then, at some point, there is the cloud layer above the application layer in the embedded devices where data gets picked up and made available for backend processing. And above that, you have pieces that analyze, correlate, store, and visualize data and groups of data. Showing exactly where various players (Atmel, ARM mbed (Sensinode), Open Platform for IoT, Ayla Networks, Thingsquare, Zigbee, and other entities and technology) exist and what parts of the overall IoT they cover and make up.”

Atmel offers a product line that encompasses various products that give rise to high end analog to digital converter features.  For example in Atmel’s SAM D20 an ARM based Cortex-M0+, the hardware averaging feature facilitates oversampling.  Oversampling produces sample rates at high resolution.  The demand for high resolution sampling runs congruent to many real-world sensor requirements.  In the world of engineers and the origin of the embedded designs, achieving lean cost by ensuring no extra software overhead – competitive with benefits.  In the design and mass fulfillment of millions of components and bill of materials used to create a multi-collage of global embedded systems, there exist strong ledger point of view – even for engineers, designers, architects, and manufacturing managers.  Ultimately, augment business line directives to fullest ROI.  Expanding the design/experience envelope, Atmel microcontrollers have optimized power consumption.  Brian Hammill concurs, “Atmel offers several MCU families with performance under 150 microamperes/MHz (SAM4L has under 90 uA/MHz, very low sleep current, and flexible power modes that allow operation with good optimization between power consumption, wakeup sources, wakeup time, and maintaining processor resource and memory.”

Geographically, there seems to be a very strong healthcare pull for IoT in Norway, Netherlands, Germany, Sweden and this follows into Finland and other parts of Asia as well as described in Rob van Kragenburg’s travels of IoT in Shanghai and Wuxi. Therein lies regional differences mixed with governance and political support. It is also very apparent that Europe and Asia place an important emphasis on IoT initiatives.

Elsewhere, this is going to happen from bottom-up (groups akin to Apache, Eclipse for the early web, open source, and IDE, and now IoT-A, IoT Forum) in conjunction with top-down (Fortune 500’s) across the span of industry. But first, collaboration must occur to work out the details of architecture, data science and scalability. This is contingent on both legacy systems and modern applications synchronizing and standardizing in the frameworks conceived by open and organizing bodies (meant to unify and standardize) such as IoT-A and IoT-I. Indeed, events like IoT-Week in Helsinki bring together thought leaders, technologist and organizations – all working to unify and promote IoT architecture, IP and cognitive technologies, as well as semantic interoperability.

In the spirit of what is being achieved by various bodies collaborating in Helsinki, Brian Hammill asserts: “The goal of a semiconductor company used to be to provide silicon. Today it is more as we need development tools as well as software stacks. The future means we need also to provide the middleware or some for of interoperability of protocols so that what goes in between the embedded devices and the customers’ applications. I think an IoT Toolkit achieves that in its design.  Atmel also offers 802.15.4 radios, especially the differentiation of the Sub-GHz AT86RF212B versus other solutions that have shorter range and require and consume more power.

We also must provide end application tools for demonstration and testing, which can then serve as starter applications for customers to build upon.”

There will be large enterprise software managing data in the IoT. Vendors such as SAS are providing applications at the top end to manage and present  data in useful ways, especially when it comes to national healthcare. Then there are companies which already know how to deal with big data like Google and major metering corporations such as Elster, Itron, Landis+Gyr and Trilliant. Back in the day, meter data management (MDM) was the closest thing to big data because nobody had thought about or cared to network so many devices.

We tend to think of IoT as a stereotype of sorts – forcing an internet-based interaction onto objects. However, it is really trying to configure the web to add functionality for “things,” all while fundamentally protecting privacy and security for a wide range of objects and devices, helping us shift to the new Internet era. Currently, there a number of organizations and standards bodies working to build out official standards (IETF) that can be ratified and put into engineering compliance motion. Really, it’s all starting to come together, as illustrated by the recent IoT Week in Helsinki which is also working to bring Internet of Things together. Here is IoT’s very own original champion, a leader whom has been working toward promoting the Internet of Things (IoT) for 15 years: Kevin Ashton’s opening talk for the Internet of Things Week in Helsinki (video). 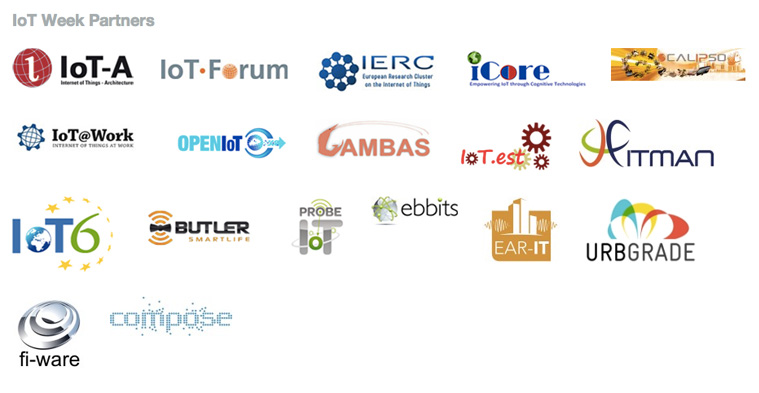 Remarks at the opening of Third Internet of Things Week, Helsinki, June 17, 2013:

Thank you, and thank you for asking me to speak at the Third Internet of Things Week. I am sorry I can’t be with you in Helsinki. This is a vibrant and growing community of stakeholders. I am proud to have been a part of it for about 15 years now.

So, just in 2 years, this one company has sold almost as many RFID tags as there are people on the planet. And, of course, RFID is just one tiny part of the Internet of Things, which includes many sensors, many actuators, 3-D printing, and some amazing work in mobile computing and mobile sensing platforms from modern automobiles, which are really now sensors on wheels, and will become more so as, as we move into an age of driverless cars, to the amazing mobile devices we all have in our pockets, that I know some of you are looking at right now. Then there are sensor platforms in the air. There is some really amazing work being done in the civilian sector with drones, or “unmanned aerial vehicles.: that are not weapons of war or tools of government surveillance but are sensor platforms for other things.

And all this amazing technology, which is being brought to life right now, is connected together by the Internet, and we can only imagine what is coming next. But one thing I know for sure is, now that the Internet of Things is the present and not the future, we have a whole new set of problems to solve. And they’re big problems. And they’re to do with architecture, and scalability, and data science. How do we make sure that all the information flowing from these sensors to these control systems is synchronized and harmonized, and can be synthesized in a way that brings meaning to data. It is great that the Internet of Things is here. But we have to recognize we have a lot more work to do.

It is not just important to do the work. It is important to understand why the work is important. The Internet of Things is a world changing technology like no other. We need it now more than ever. There are immeasurable economic benefits and the world needs economic benefits right now. But there is another piece that we mustn’t lose sight of. We depend on things. We can’t eat data. We can’t put data in our cars to make them go. Data will not keep us warm.

I have no doubt that we have to build this network and no doubt [it] is going to help us solve the problems of future generations by doing a much more effective job of how we manage the stuff that we depend on for survival. So, I hope everyone has a great week. It is really important work. I am delighted to be a small part of it. I am delighted that you all are in Helsinki right now. May you meet new people, make new friends, build great new technology. Have a great week.