This mosaic LEGO portrait of Super Mario Bros. sprites is comprised of LED panels, transistors and an ATmega328.

By now, we’re sure you’ve come across at least one of Maker Baron von Brunk’s amazing LEGO projects. From his Starmen to Dry Bones sprites, and everything in between, the talented and quirky New York artist continues to impress us with his LED-flashing, nostalgic chiptunes-playing Super Mario Bros. creations. 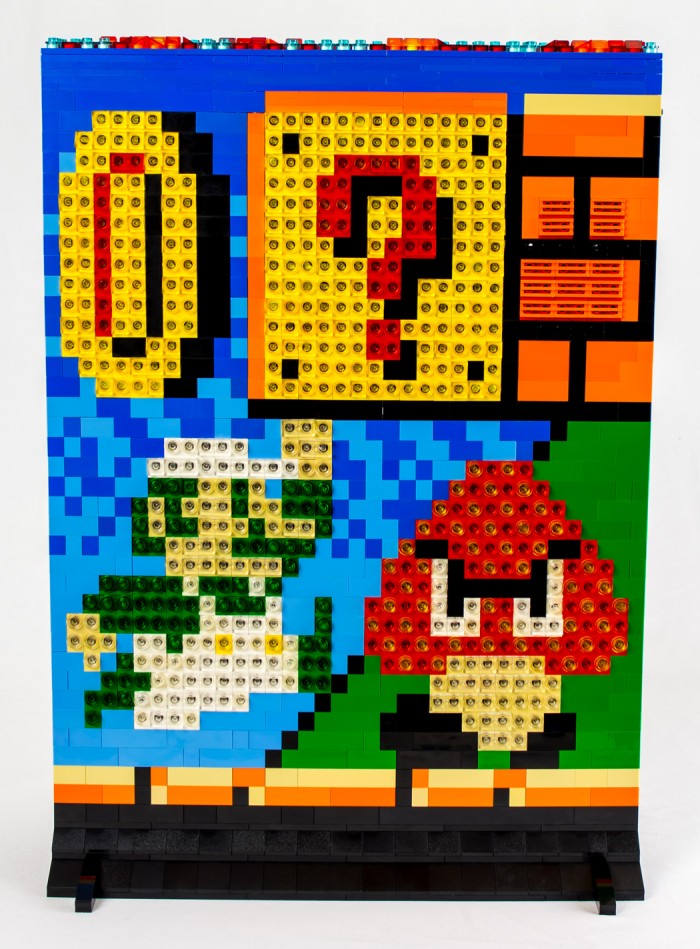 Added to his growing list is the Illuminated Mosaic Musical Luigi, which combines the polyphonic sound code from his electronic Dry Bones sprites along with the structural functionality of his illuminated mosaic Link portrait. In this new project, von Brunk uses a grid of flat LED panels fastened onto a rear door, with a 16Ω speaker attached as well. Controlling the whole circuit is a homemade circuit board based on an ATmega328P that contains an Arduino code for playing the Super Mario Bros. “level complete” theme and activating the lights.

“The biggest technological feat for this project is how I successfully managed to control the 12V LED panels through a small 5.5V AVR, through the help of transistors. In layman’s terms, a small microcontroller like the ATmega328 is only capable of controlling circuits between 3-5.5V; anything else will burn out the chip. By using transistors attached to the digital outputs of the ATmega, I can control much larger loads, with the overall 12V input power being directed into the circuit via a voltage regulator,” the artist explains.

As for the LEGO portion of the project, it was rather straightforward and fortunately didn’t present any obstacles along the way. Towards the tail-end, though, the Maker did have to slightly tweak the mosaic in order to use a small tactile button to trigger the circuit. Originally, he had a large momentary pushbutton installed near the bottom of the rear door, but the button required too much pressure to push, which caused the structure to wobble and almost fall over when pressed.

“Creating the circuit board and wiring the Arduino code was also rather simple, since I used the same functionality of the Dry Bones model. Unfortunately, when I was testing out the method of using transistors for controlling the LED panels, I accidentally loaded the 12V power into my Arduino Uno’s 5.5V input — thus frying it. After purchasing a new Arduino, I successfully did some breadboard experiments with TIP120 transistors to control the LED panels,” he adds.

What’s cool is that the LEGO structure opens like a book, and on the back door are eight white SMD LED panels connected in parallel to three digital output pins of the ATmega328P — cathode to cathode, with the red positive wires being channeled into the positive terminal of the 12V power supply. For sound output, von Brunk created some makeshift speaker holes atop the right orange brick sprite. This was achieved by placing LEGO grille tiles over headlight pieces.

Reading about the portrait is one thing, but seeing it in all of its glory is a whole ’nother story. Intrigued? Be sure to head over to its official page here.