This first-of-its-kind, autonomous robot blasts off like a UFO.

In a paper published Thursday in Science magazine, engineers from Harvard University and the UC San Diego have revealed a 3D-printed, autonomous robot capable of over 30 untethered jumps without connection to an external computer or power source. Actuated by a combination of butane and oxygen, this little bot can leap two and a half feet into the air — up to six times its body height. 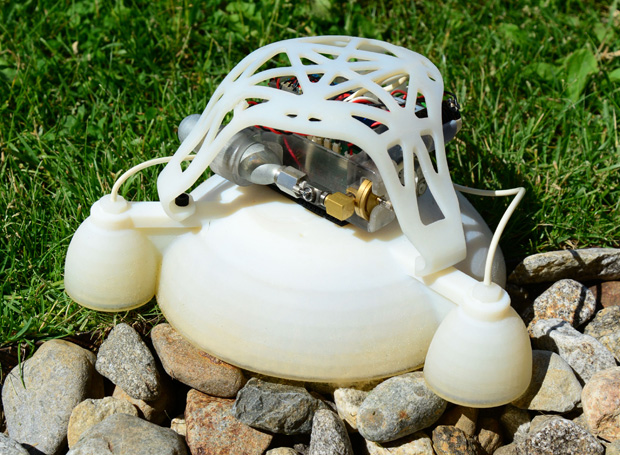 Inspired by nature, the project uses the combination of both hard and soft materials which its designers say make it a more efficient jumper. For example, certain species of mussels have a foot that starts out soft and then becomes rigid at the point where it makes contact with rocks.

Soft robotics is surely a hot topic at the moment, as engineers are finding them to be much more adaptable and resilient than their conventional, metal-based counterparts. However, their flexibility comes at a coast: they tend to be slower, more difficult to fabricate and challenging to make autonomous due to the fact that most motors, pumps, batteries, sensors and microcontrollers are rigid.

Fortunately, the joint research project has come up with a design that offers a new solution to this conundrum by integrating hard and soft materials. In other words, the best of both worlds.

The combustion-powered robot is comprised of two hemispheres: a soft, plunger-like body with three pneumatic legs at the bottom and a 3D-printed, sturdy core on top. The latter houses a custom circuit board, a high-voltage power source, a battery, a miniature air compressor, a butane fuel cell, six solenoid valves, an oxygen cartridge and pressure regulator and ducts to move the gas and stuff around as necessary. What’s more, it has nine graduating levels of stiffness.

In order to determine the perfect gradient of firmness, researchers tried a couple prototypes. And what they found was that a fully rigid top would make for higher jumps, while a flexible top was more likely to survive impacts on landing, allowing the robot to be reused.

For movement, the robot inflates its pneumatic legs to tilt its body in the direction that it wants to go. From there, butane and oxygen are mixed together and ignited, catapulting it into the air like a UFO. Once the chemical charge is exhausted, the bottom hemisphere goes back to its original shape. Researchers say that the robot’s jumping ability and soft body can come in handy in harsh and unpredictable or disastrous environments, enabling it to survive large falls and other unexpected situations.

In a series of tests, the robot was able to leap two and a half feet in height and half a foot laterally. Beyond that, it jumped more than 100 times and survived an additional 35 falls from a height of nearly four feet.

A group of Harvard University researchers — Michael Rubenstein, Bo Cimino, and Radhika Nagpal — have developed an $11 tool to educate young Makers on the fundamentals of robotics. Dubbed AERobot (short for Affordable Education Robot), the team hopes that it will one day help inspire more kids to explore STEM disciplines.

Fueled by the recent emergence of the Maker Movement, robots are becoming increasingly popular throughout schools in an effort to spur interest in programming and artificial intelligence among students.

The idea behind this particular project was conceived following the 2014 AFRON ellenge, which encouraged researchers to design low-cost robotic systems for education in Third World countries. As Wired’s Davey Alba notes, Rubenstein’s vast experience in swarm robotics led to him modding one of his existing systems to construct the so-called AERobot. While it may not be a swarm bot, the single machine possesses a number of the same inexpensive components.

So, what is the AERobot capable of doing?

With a megaAVR 8-bit microcontroller as its brains, the team assembled most of its other electronic parts with a pick-and-place machine, and to reduce costs some more, used vibration motors for locomotion and omitted chassis. AERobot is equipped with a built-in USB plug that also enables it to be directly inserted into any computer with a USB port — unlike a number of other bots.

“Using this USB connection, it can recharge its lithium-ion battery and be reprogrammed all without any additional hardware. AERobot has holonomic 2D motion; using two low-cost vibration motors, it can move forward, backwards, and turn in place on a flat, smooth surface such as a table or whiteboard. It also has three pairs of outward-pointing infrared transmitters and phototransistors, allowing it to detect distance to obstacles using reflected infrared light, and passively detect light sources using just the phototransistors.”

In addition, the bot features one downward-pointing infrared transmitter along with a trio of infrared receivers to detect the reflectivity of the surface below, which is useful for line following. To aid in learning programs and debugging, AERobot also boasts an RGB LED.

On the software side, AERobot uses a graphical programming environment, which makes reprogramming easy for beginners. By modifying the minibloqs programming language, Rubenstein says you don’t really need to type code, instead you just drag pictures. He went on to tell Wired, “Say I wanted an LED on the robot to turn green. I would just drag over an image of an LED, and pick the green color.”

Interested in learning more? You can scroll on over to the project’s official page or read its entire Wired feature here.

Researchers in Harvard’s Self-Organizing Systems Research Group have introduced Kilobots — a 1,024-strong swarm of decentralized cooperating robots that can assemble themselves into complex shapes with very little human input. 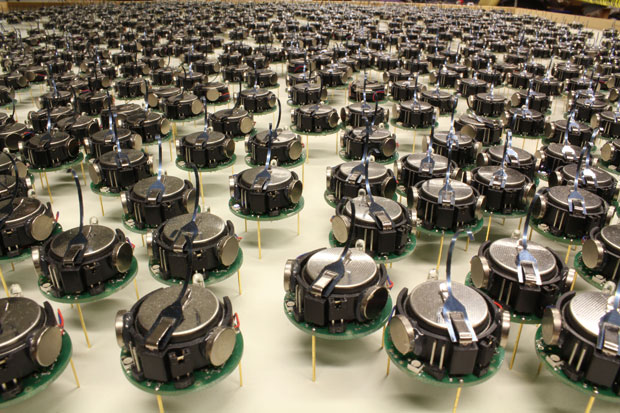 A team comprised of Michael Rubenstein, Alejandro Cornejo, and Professor Radhika Nagpal have described their 1,024-robot swarm in a detailed study published in Science. “Each robot has the basic capabilities required for a swarm robot, but is made with low-cost parts, and is mostly assembled by an automated process. In addition, the system design allows a single user to easily and scalably operate a large Kilobot collective, such as programming, powering on, and charging all robots systems,” the researchers explain.

The thousand plus bots are each embedded with an Atmel microcontroller, two vibrating motors powering rigid legs that allow them to skitter across smooth surfaces, and an infrared emitter-sensor pair to receive commands and communicate wirelessly. They can transform into a variety of shapes, including a starfish and the letter K (as seen below).

What makes this piece of work so exceptional is that, before the Kilobot, most collectives were limited to less than 100 robots. In order to exceed previous limitations, this required completely rethinking how the robots were designed. To do this, the team of researchers created a coin-sized robot that possessed the ability to move on three stick-legs using two vibrating motors. It could then communicate with neighbouring robots using the aforementioned infrared light, signal its state by changing a color LED and sense ambient light. 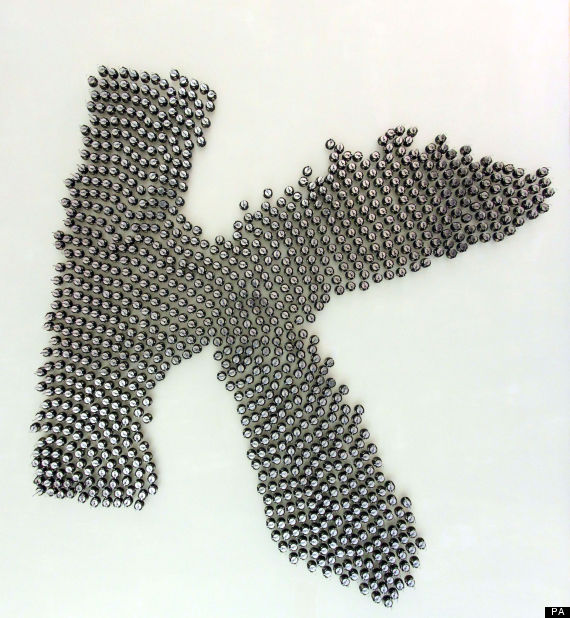 In current robotics research, there has been a vast body of work on algorithms and control methods for groups of decentralized cooperating robots, called a swarm or collective. “These algorithms are generally meant to control collectives of hundreds or even thousands of robots; however, for reasons of cost, time, or complexity, they are generally validated in simulation only, or on a group of a few 10s of robots,” the study reveals. With the robots ready, the team developed an algorithm which could guarantee that a large numbers of robots, with limited capabilities and local communication, could cooperatively self-assemble into user-specified shapes. Four “seed” robots kick off the process, generating a domino-effect of signals that propagate through the rest of the swarm. How each Kilobot positions itself is dependent upon the distance between itself and its nearby bots. IEEE Spectrum explains that while in biological systems, swarms can organize and control themselves based on a set of very simple rules. With the Kilobots, however, the algorithm that they use to create shapes are based on a similarly simple set of capabilities:

“Increasingly, we’re going to see large numbers of robots working together, whether its hundreds of robots co-operating to achieve environmental clean up or a quick disaster response, or millions of self-driving cars on our highways. Understanding how to design ‘good’ systems at that scale will be critical,” said Professor Radhika Nagpal.

For those interested in making, buying or programming their own Kilobot swarm, you can check out Harvard’s official project page here.

Thanks to pals at Evil Mad Scientist, I learned about these small self-powered autonomous robots called Kilobits. Brought to you by Harvard University, the little gizmos are run by an Atmel ATmega328.

The robots can communicate with an IR (infrared) transceiver. This allows them to exhibit swarm behavior like insects. Check out this video of the Kilobots doing their thing.

Harvard is doing this to study complex self organizing behavior. This may help psychologists and economists understand complex human behavior that just appears, like the open-source movement, the Dabbawala lunch delivery system in India, and how day workers outside of the Home Depot settle on rates and seniority.

The hi-zoot Harvard Kilobots are preceded by the Make community Vibrobot. Evil Mad Scientist did a great vamp with their BristleBot, which uses the head of a toothbrush. 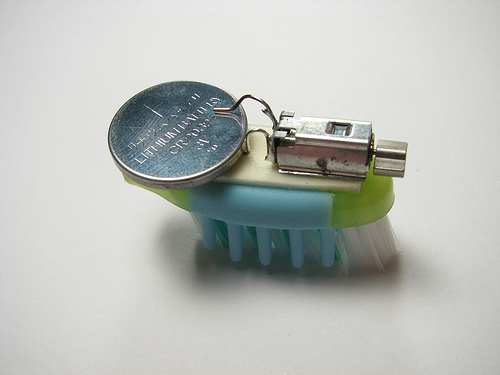 While created for research, to their credit, Harvard made this is an open-source project that is just perfect to be picked up by the Maker Movement. NY Maker 2013 starts Saturday, the Atmel team is setting up and the Evil Mad Science people will be at our booth to show off their cool Atmel-powered kits.