This prototypical system explores the combination of torque feedback with screen-based handheld devices.

Haptics, or kinesthetic communication, generally refers to tactile feedback that recreates the sense of touch by applying forces, vibrations, or motions to the user of a mobile device. And for those gamers out there, many of you can best associate to technology in the form of controllers and joysticks, most notably the “rumble” packs. However, since its inception over 30 years ago, not much has changed from days of the tactile telephone or Aura Systems’ Interactor Vest.

That was until now. A group of students from the University of Salzburg, Austria is looking to usher in a new era of haptics with the introduction of TorqueScreen. The prototypical system combines a handheld touchscreen device with an actuated flywheel capable of imposing angular momentum onto the tablet. According to its creators, the unique design of the project combines the movement and physics of virtual objects on the screen with the torque as haptic output imposed on the tablet.

“A widely distributed form of haptic feedback in handheld and mobile devices is vibrotactile feedback. However, the information capacity is very limited in vibrotactile feedback and not directly associated with conceptions of real space or real movement,” the team states in their paper. “Richer ungrounded haptic feedback can be provided by dynamically altering physical, inertial, and kinematic attributes (e.g. weight, velocity) of a device or interface.” 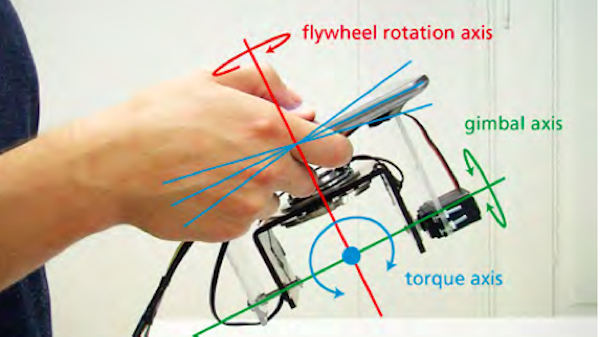 The prototype is comprised of a tablet, a brushless DC motor driving the flywheel and a servo motor rotating the gimbal. Or, in other words, TorqueScreen is a gyroscope actuator attached to a mobile device. Rotating the gimbal creates angular momentum around the torque axis, perpendicular to the rotational axis of the flywheel and the rotation of the gimbal. This allows the user to sense the tablet’s resistance to rotate about the servos axis. Both the motor controller and the servo are connected to an Atmel based Arduino, which handles the motor speed and position of the servos.

As our friends at Hackaday note, the team’s recent Tangible, Embedded, and Embodied Interaction Conference demonstration featured a brushless motor plucked from an old hard drive controlled by the Arduino and driven manually by a Wii nunchuck, which can be seen below.

“While our initial prototype has some limitations, it provides ways to study unexplored embodied interaction design beyond what is currently possible on handheld devices. In our future work, we aim to increase the prototype’s fidelity and the according interaction space by adding multiple degrees of freedom in a desirably smaller form factor.”

For the system designer, adding haptics capability and tactile feedback to a system is both easy and difficult. In general, the sensor has little or moderate impact on the BOM, space, and cost, while the software has no BOM and minimal cost implications. But the embedding hardware drive circuitry and the physical actuator require considerable assessment of design issues, power consumption, PC board and enclosure real estate as well as the cost dimension.

There are four key elements to implementing a haptics function in a system design:
1) The sensor, which may not be needed, depending on the system,
2) The software, which decides what output waveform is needed,
3) The hardware driver for the haptics actuator, and
4) The actuator itself.

These four blocks interact to close the loop and meet the unique requirements of haptics functionality. This article will take a deeper look at the sensor, hardware driver and the actuator in a haptics system.

While many haptics functions have or add a sensor to sense a physical parameter, others do not need a sensor function at all. For example, in a basic gaming system the software determines what the user is seeing and doing and generates outputs such as controller rumble that correspond to the action. Other systems make use of existing sensors, and only need to add additional software and output drive. For example, the Atmel AT42QT1085 QTouch microcontroller is specifically designed to use with the existing capacitive-touch sensors of a screen. (Fig. 1) It embeds software to interpret the user’s finger actions on various screen sliders, buttons and wheels, and then decides the appropriate response.

Fig. 1: The Atmel AT42QT1085 QTouch microcontroller is designed to work with a standard capacitive-sensing touchscreen and function as the interface between the panel and system, by assessing the meaning of the user’s finger swipes. (Source: Atmel)

More complicated designs need a haptics-specific sensor as their signal and data source with the use of multi-axis accelerometers to determine the motion of a game controller or robotic control. This accelerometer is almost always a MEMS device, and may provide a digitized output directly or an analog one that the system microcontroller must digitize. Fortunately, the resolution, accuracy and speed requirements are relatively modest: 8 to 10 bits at just several hundred samples per second or less.

Not all haptics inputs are based on motion and position. Some also sense the temperature of a user’s hands, which can be done with an inexpensive diode-based sensor or a low-cost easy-to-interface IC, such as a member of the Analog Devices AD590 family.

In order to understand the hardware driver needed, a design engineer first must know what sort of haptics actuator will be used. This is one of the most difficult choices because the laws of physics clearly show that such actuation implies motion, and motion means “work,” so power needs to be delivered in the form of current and voltage. Each of the four most common actuators has pros and cons that affect the trade-off decision.

The design team must not only weigh the characteristics of the actuator, but also its unique electronic drive requirements. In contrast, the software that controls each actuator is relatively simple; OEMs can write their own code, they may be able to get it directly from the actuator vendor, or it may be available as a licensed library from the IC vendor or third-party sources, similar to what is done for audio sound-effect clips.

The four most common actuator options in use are:

1) An eccentric rotating mass (ERM) is a tiny motor with an off-balance rotating weight. The ERM is low cost since it is used for “rumble” effects in high-volume applications such as gaming controllers. The operating current is in the 150-mA range, and it vibrates between 100 and 200 Hz. The response time of the ERM is somewhat slow (50 ms), so it is not a good choice of keyboard or button response. The ERM’s size is approximately 10 mm long with a 5 mm swing of the eccentric mass.

2) The linear resonant actuator (LRA) is a motor-like component that looks like small puck, typically about 10 mm in diameter and 4 mm thick. LRAs vibrate a single frequency between 100 and 200 Hz, with a response that is somewhat faster than ERMs, at about 30 msec. They are more costly than ERMs but need less current (about 75 mA) for actuation as well as an AC drive signal.

3) Piezoelectric modules can provide high vibration fidelity due to their fast response time (5 ms) over a wide frequency range of approximately 150 to 300 Hz, and thus are a good choice for typing feedback applications. They come in a long, relatively slim form factor, about 3.5 mm square and 40 mm long. Piezo modules are high performance actuators that can be used to create realistic haptic effects and can be applied in smartphones or tablets. Although they draw no more aggregate power than ERMs or LRAs, they do need a relatively high current pulse of 300 mA at around ±75 V (often derived from a 3 V supply). Piezo modules are a highly capacitive load, which the interface IC must be able to drive. Although they are ceramic-based transducers and might be assumed to be brittle, they are actually rugged due to their small mass and layered construction.

4) The electroactive polymer (EAP) actuator is a thin, flat, durable panel that is less than 1 mm thick. It requires a somewhat complex mounting arrangement on a sled to act in conjunction with the associated movable mass. Due to its fast response time of just a few milliseconds and resonance at around 100 Hz, it is a good choice for touchscreen feedback and is most commonly found in top-of-the-line smartphones. The biggest challenge with EAPs is that they require a drive voltage of approximately 800 V, which means a sophisticated and somewhat costly boost power supply subsystem.

There is no simple “best” answer for providing tactile haptics feedback to the user, as each actuator type has unique and sometimes complex electronic drive requirements. IC vendors have responded to this need with a variety of drivers that bridge the voltage/current differential between the conventional low voltage and currents of most systems and the needs of the various actuators.

For example, Texas Instruments offers the DRV2605 driver for ERM and LRA actuators, using the I2C bus for the processor interface (Fig. 2). It embeds a smart-loop architecture, which simplifies achieving auto-resonant drive for the LRA as well as feedback-optimized drive for the ERM. This feedback feature provides automatic overdrive and braking, which in turn allows creating a simplified input-waveform model, along with reliable motor control and consistent motor performance. An audio-to-haptics mode automatically converts an audio input signal to consistent haptic effects. There is also no need to design haptic waveforms with this IC, since the vendor offers a royalty-free library of over 100 haptics effects. An evaluation kit and board aids design and experimentation (Fig. 3).

Fig. 3: For those unfamiliar with either haptics in general, or specific software and hardware issues related to LRAs and ERMs, the available DRV2605EVM-CT evaluation kit eases the implementation process and reduces the design-in time for the DRV2605 haptic driver. (Source: Texas Instruments)

For piezo transducers, driver components such as the Texas Instruments DRV2667 are available (Fig. 4). Like the ERM/LRA driver IC, it interfaces to the processor via the I2C bus, but the similarities end there. It integrates a 105 V boost switch, power diode, fully differential amplifier, and digital front-end including waveform synthesizer. Its output is designed for capacitive loads. For example, it can drive a 330 nF load at 100 Vp-p and 300 Hz, and a 680 nF load at 50 Vp-p, also at 300 Hz. As with most haptics drivers/transducers, vendors offer evaluation kits (Fig. 5), so designers can explore operating characteristics and subtle design issues of these somewhat unique electrical-to-motion transducers.

Fig. 4: For piezo actuators, the DRV2667 from Texas Instruments provides the fast-slewing high-voltage drive into a capacitive load that is required by this actuator technology. (Source: Texas Instruments)

Fig. 5: Evaluation kits such as the DRV2667EVM allow designers to easily interface to and drive a piezo transducer and thus understand its special operating characteristics. (Source: Texas Instruments)

There’s no doubt that adding haptics to a design adds another dimension to the user experience and human machine interface (HMI). For system designers, haptics technology also brings new challenges of actuator considerations, associated drive circuitry, and increases in space as well as power requirements.

This post was written by Bill Schweber and originally published in Avnet’s Technical Articles. For more engineering resources from Avnet, please visit their Design Zones.

Going to the 2013 International Consumer Electronics Show (CES) in Las Vegas next month? In our meeting room at the show, Atmel will showcase embedded technologies that inspire smart, connected designs. Among our many demos:

To schedule a meeting with Atmel executives and Tech Experts at CES, contact your local sales representative or send an email to events@atmel.com. We will also be in the ZigBee Pavilion with demos of our ZigBee Light Link and Wireless Composer/Sniffer solutions.

We look forward to seeing you in Las Vegas!