And who said big things can’t come in small packages?

A CD-sized printer you can take anywhere

Think printing is boring? Tedious? Annoying? You may want to check those thoughts at the door after checking out this portable, handheld printer from a team of students from Lev, the Jerusalem College of Technology. The young Makers — who together launched ZUta Labs — have debuted a revolutionary little gadget. The appropriately named Pocket Printer is an untethered robot comparable in size to a CD case that features a set of omni wheels and a printer cartridge tethered to an [Atmel based] Arduino board. Once placed down, the device begins to run along the paper, using its aforementioned wheels and a high-res optical sensor to move around, distributing ink wherever it’s needed. For multi-paged documents, simply pick up the printer and put it onto the the next blank sheet of paper.

A drone that can fold up into your front pocket

Developed by Maker Jason Lam along with his team at San-Francisco based AeriCam, the Anura is a flying quadcopter that can be folded into approximately the size of an iPhone 6. The portable drone connects with iOS and Android smartphones via Wi-Fi. Equipped with a built-in microcamera, Anura offers a live aerial view on the screen of the connected smartphone, which also serves as its remote control. In addition, the flying apparatus can soar within a range of 80-feet with a flight time of around 10 minutes per charge and a top speed of 25 MPH. The pocket-sized UAV hopes to pack some other functionalities as well, including auto take-off, auto land, return home and follow phone.

An entire band in your pants

Ever catch yourself drumming on your thighs? Your table? Your desk? Your steering wheel? Now, starting a one-man band is as simple as wearing this musical kit. As seen on Kickstarter and ABC’s Shark Tank, DrumPants transform one’s trousers into a full ensemble with 100+ built-in high-quality sounds. Though the DrumPants were designed with music in mind, the sensors do provide additional uses — they can reprogrammed to trigger actions within a wide variety of apps, ranging from answering their phone, to playing a streaming video, to controlling a game. In addition, its control box is powered by an Atmel | SMART ARM Cortex-M3-based MCU and features an ultra-low latency Bluetooth 4.0 chip, an embedded sound engine for 1/8-inch headphone jack, 128 instrument sample banks and a Micro-USB for connection to a laptop or PC.

Safe to say, you’ve never seen a business card like this before. Created by Maker Kevin Bates, Arduboy is an uber-mini handheld game console powered by an ATmega328P. The device, which is roughly a millimeter and a half thick and apparently packs nearly 10 hours of battery life, is equipped with a 1.3″ OLED display, capacitive touch buttons and a piezo-electric speaker. In essence, it is a digital business card which features a built-in Tetris (and Pokemon) game and several control buttons.

In the wake of recent breaches, the need for two-factor authentication is more apparent than ever before. And, while log-ins and passwords are critical elements required to access the sites and services we use on a daily basis, remembering complex credentials can be quite difficult. So, in an effort to minimize the number of ways a password could be compromised, the Hackaday community recently devised an offline password keeper called Mooltipass. The crew selected an ATmega32U4 MCU to power the device, which also boasts an easy-to-read OLED screen, a read-protected smart card (AT88SC102) and Flash memory to store encrypted passwords.

A portable breathalyzer that has your BAC

Developed by the team at Edge Tech Labs, DrinkMate is a lipstick-sized breathalyzer that plugs directly into your smartphone. The project recently completed a successful Kickstarter campaign, where it garnered well over its original $40,000 goal. Unlike those of the past, the world’s smallest breathalyzer — which measures 1.8″ long x 0.62″ in diameter — works in conjunction with the Android phone’s app and displays his or her blood alcohol content (BAC) results instantly with no calibration, no mouthpiece and no battery. A user simply inserts one end of Atmel based DrinkMate into a phone’s microUSB port, while blowing into the other end. BAC results are then displayed instantly.

A Polaroid printer for your smartphone 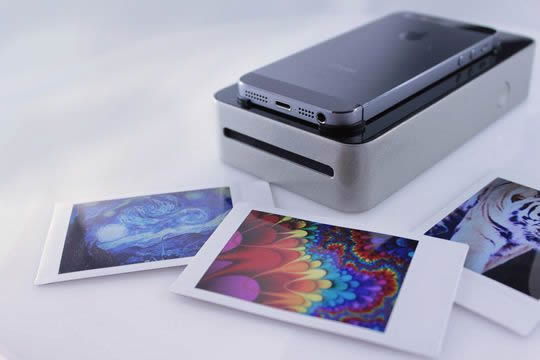 Have you ever browsed through your smartphone pics and wished you could print copies in a moment’s notice? A new device, aptly named SnapJet, is now making that a reality. The open-source, instant-film printer uses Polaroid technology to let users wirelessly print their photos directly from a smartphone. Impressively, the SnapJet doesn’t require any mobile app, wires, or other connections, such as Wi-Fi, NFC or even Bluetooth. Driven by an AT90USB1286, the SnapJet also features an OLED display and other connectivity options — like USB and BLE — just in case you feel the need retouch a few pics, or for those Makers out there, the urge to reprogram or hack the open-source device.

Designed by the Brooklyn-based HabitatMap team, AirBeam is a portable, palm-sized system for mapping, graphing and crowdsourcing air pollution in real-time as you make your way around city streets. While the wearable instrument may not purify the air, it does enable you to monitor what you are breathing in, thereby increasing your awareness of the budding issue. As its creators note, pollution is among the leading causes of chronic illnesses as well as contributor to a number of terminal illnesses. In an effort to share and improve the atmosphere, the ATmega32U4 based AirBeam uses a light scattering method to take regular measurements of fine particular matter (also known as PM2.5), convert the data into a more digestible form and relay it to its companion smartphone app via Bluetooth. The Android app then maps and logs the data in real-time.

A tracker for your environment 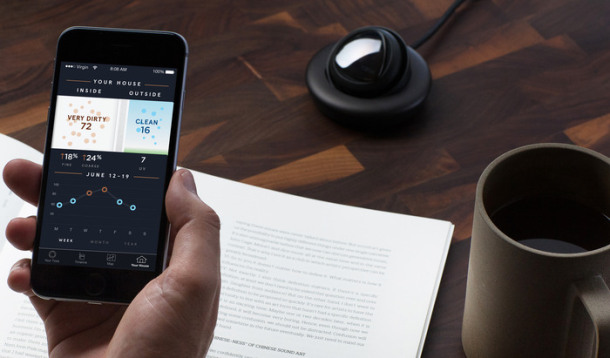 Wearables? More like air-ables! While a majority of the wearable tech space has been focused on tracking what’s inside our bodies such as activity and stress levels, a new kind of device is emerging, one in which monitors what’s going on outside of us — specifically in our environment. Similar to the aforementioned AirBeam handset, TZOA is capable of measuring air pollution and UV exposure in one’s immediate environment using advanced sensor technology. The tiny, round tracker is equipped with optical laser sensors that keep tabs on air quality, UV light, humidity, and temperature — all of which transmit data to a companion smartphone app via Bluetooth to quantify the environment around the wearer. Using this information, the wearer can determine whether they need to open a window, step outside to catch a few rays, or simply take a different route on their way to the office. 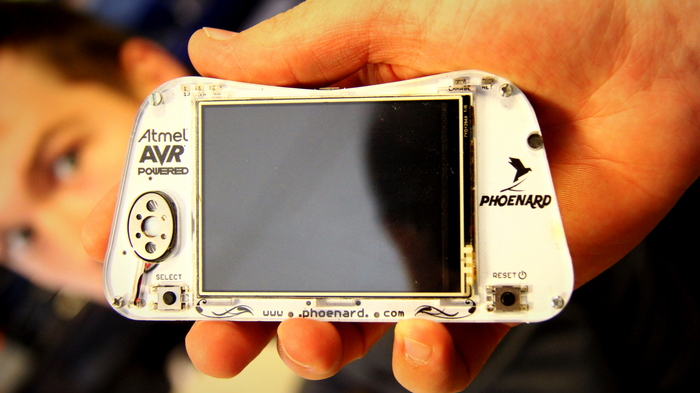 Fresh of a successful crowdfunding campaign, Makers Pamungkas Prawisuda Sumasta and Ralf Smit have created the first all-in-one Arduino-compatible prototyping gadget. While its form-factor is rather convenient, its hackability and wide-range of applications is where the so-called Phoenard truly sets itself apart. The gadget, which is powered by an ATmega2560, not only sits perfectly in your hand but can slide quite easily into your pocket. The 11.8 x 6.1 x 1.1 cm device boasts a full-color touchscreen display and an on-board battery, and is even equipped with its own operating environment. Given its incredible versatility, the self-programmed Phoenard is bound to make every true Maker’s dream a reality. As its creators note, the prototyping platform can be used as the ‘brain’ of any DIY Project. Unlike an Arduino, Phoenard encompasses several features built entirely into a single unit, which can also serve as your daily mobile device. Sure, you can buy a smartphone, but wouldn’t it be even more awesome to devise your own?

A gaming console that’s smaller than your credit card

Developed by National Engineering School of Saint-Etienne student Aurélien Rodot, Gamebuino is a retro-inspired, pocket-sized game console built around an ATmega328. No larger than a credit card, the successfully crowdfunded device gives a whole new meaning to portable gaming. With its metallic and vintage appearance, it will surely spark up some technostalgia of the Gameboy Advance of the early 2000s. According to its creators, Gamebuino is a true turnkey solution that enables Makers of all ages to begin creating their own 8-bit games — even those with very little programming knowledge. Advanced users will take comfort in knowing that the device is open-source, hackable and expandable.

In honor of Game Boy’s 25th birthday, the Microduino Studio team debuted the Microduino-Joypad, an 8-bit multi-functional game console capable of playing all-time classics ranging from Tetris to Snake. The open-source gadget allows Makers to relive some of their greatest childhood memories of clicking away at those giant buttons on a vintage Nintendo handheld. Based on both ATmega328P and ATmega644PA MCUs, the Joypad can be used for everything, from controlling a quadcopter to playing a few levels of the latest Angry Birds installment. 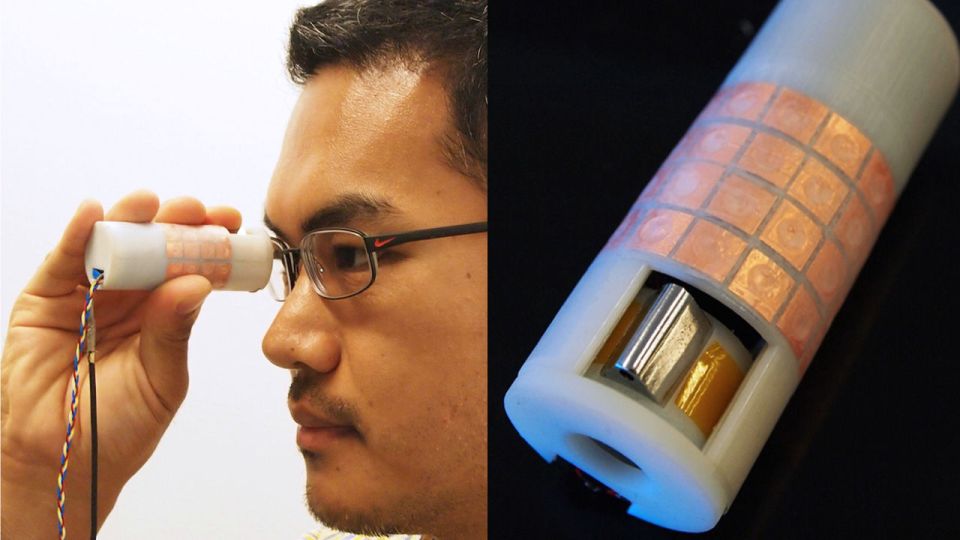 A group of researchers from Nokia and a number of universities have come together to design a gadget that has the same benefits of Google Glass, while eradicating the need to wear them around one’s face. The device, which is tethered to an Epson Android computer and an Arduino Pro Mini (ATmega168), provides an eye-level display for quick, discreet access. Named after the small magnification tool commonly used by jewelers, Loupe is described by its creators as a novel interactive device with a near-eye virtual display similar to head-up display glasses. With its cylindrical shape, the chapstick-sized gadget can be held up to one’s eye when a user wants to check their Facebook, Twitter, Instagram and such. When not in use, the device can easily be stowed away in a pocket or worn like a pendant necklace. 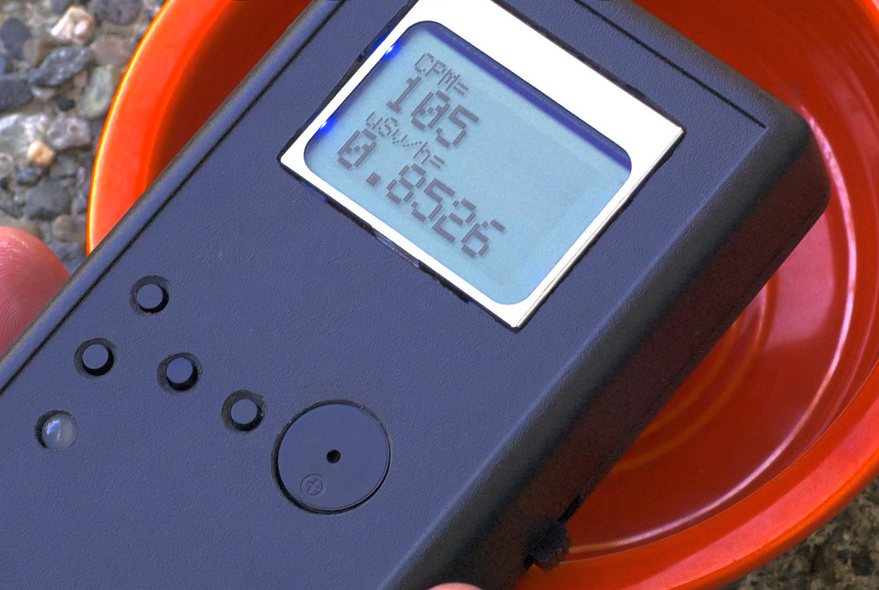 Developed by AeroSplice, the APOC Pro is an advanced open-source Gamma particle and X-ray radiation detector powered by an ATmega328. The device logs data onto a microSD card in a readable format, which is later analyzed using a custom web application and displayed to other users located throughout the world.