The MobileNode is an open source IoT board, which was named a semi-finalist in last year’s Hackaday Prize and is now live on Indiegogo. Measuring just seven centimeters in diameter, the circular device is equipped with an ATmega32U4 MCU at its core, a GPS/GLONASS module for tracking and a GSM/GPRS chip for data transmission.

Makers can easily attach a variety of sensors to the MobileNode, including air quality (CO, CO2, O2, etc.), temperature, humidity, fire and motion, as well as add lights, servo motors and other electronic circuits. This enables the Arduino-compatible board to monitor air pollution, reduce energy consumption, collect real-time data, and even control food production machinery. What’s more, there are four holes for M1.2 or M1.4 screws, making it possible to house the MobileNode inside a box or case.

Every MobileNode comes with an attached tag, which contains both a public and private key. As its creators Oscar Rojas and Camilo Rojas reveal, you can push data to the cloud with the private key, while accessing such information via the public key. Meanwhile, GPS coordinates are shown in a Google Map along with the board’s orientation data given by its e-compass.

Aside from all that, MobileNode features an electret microphone that lets users hear what is happening nearby, a Nano SIM card socket, TVS diodes and Bluetooth. It is also possible to connect an external antenna to the GPS module, since some applications call for the MobileNode to be used indoors.

Intrigued? Head over to its Indiegogo page here, or watch the video below.

Even if you’re a champ when it comes to soldering uber mini parts onto a PCB, you’ll be left scratching your head after watching the video below. That’s because, a Maker by the name of Shibata recently devised a GPS/GLONASS and Geiger counter mashup dead-bug style with tiny 0402-sized parts. 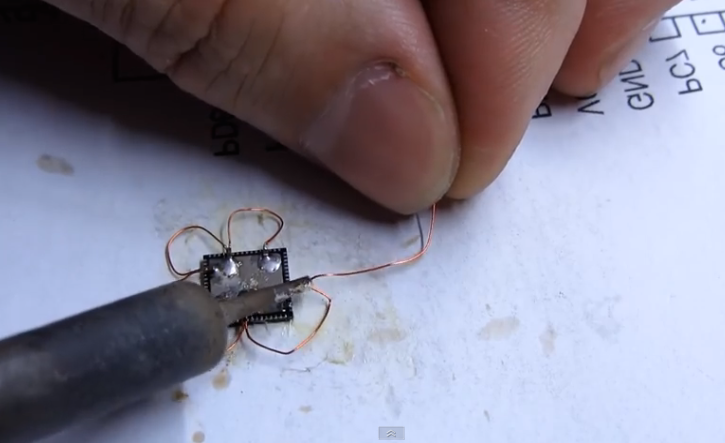 As our friends at Hackaday note, the device is comprised of an extremely small GPS/GLONASS receiver, an ATxmega128D3 MCU, a standard Nokia phone display and a Geiger tube with a mica window to track its location and the current level of radiation.

“The idea behind this project isn’t really that remarkable; the astonishing thing is the way this project is put together. It’s held together with either skill or prayer, with tiny bits of magnet wire replacing what would normally be PCB traces, and individual components making up the entire circuit,” Brian Benchoff writes.

While there’s not much detail around what’s actually going on in the build, the Maker’s soldering skills are certainly worth checking out… You’ll have to see it to believe it! (You can also read more on Hackaday here.)