In anticipation for the next wave of smart devices that will infiltrate our everyday lives, more and more companies have set out to find new ways to interact with these gadgets. With hopes of moving beyond things like the mouse, keyboard and touchscreen, one Austin-based startup has devised a wearable that lets you control your computer or smartphone by simply moving your hands. Introducing Gest.

The brainchild of Apotact Labs, Gest allows you to work with your hands in a more intuitive way, whether that’s switching between apps by twitching your finger, pointing at the screen to move the mouse or twisting your palm to adjust sliders in Photoshop. The whole premise is that you’ll never have to think about what you’re doing, you’ll just be able to do it.

The lightweight device features a palm strap with a bulk of the gadget resting on the back of your hand, while four finger connectors (which look like half rings) are attached to the main unit via short wires. 15 discreetly embedded sensors boast a latency of roughly 40-60 ms for greater accuracy and more recognized gestures, despite your hand’s orientation. So no matter if you’re drawing, typing, modeling, presenting or composing, Gest can learn the meaning of those motions and help you get things done fast in a more natural way. What’s more, you can customize your own gesture commands for additional.

“While Gest may be one-size-fits-all on the outside, on the inside it’s all about you. Everyone moves their hands in unique ways; the way you point at the screen is probably different than your friend,” its creators explain.

Thanks to the combination of accelerometers, gyroscopes and magnetometers, Gest can determine your finger positions and offer unparalleled touchless control that would otherwise require a mouse or keyboard. Meanwhile, thumb movements are inferred using data from the other sensors. The wearable is equipped with Bluetooth Low Energy, LED status indicators and a rechargeable battery capable of lasting through a full day of work.

Impressively, Gest can function just like a keyboard, only that you can type in the air or on any surface without all of that clickety-clack. And that’s not all. The Apotact Labs crew has opened up an SDK with the hope of enabling developers to create new applications, integrations and use cases for the gesture control system, from manipulating virtual reality objects onscreen to adjusting layers and changing brush sizes in Photoshop. The company will also offer developers access to custom skeletal models and motion-processed data, as well as raw sensor data that’ll bestow the freedom to innovate using its Java and Python APIs. 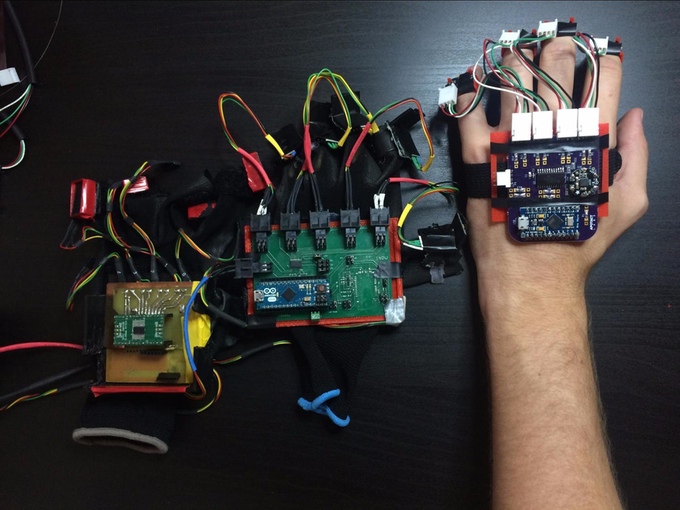 “The last time we saw a truly drastic change in the way people interact with technology was when Steve Jobs unveiled the iPhone in 2007. We believe we’re on the cusp of another transformative change,” explains Mike Pfister, CEO and co-founder of Apotact Labs. “We built Gest on a foundation of technology that will enable it to become the de facto standard for gesture interaction.”

Intrigued? Head over to Gest’s Kickstarter campaign, where Apotact Labs is currently seeking $100,000. Delivery is slated for November 2016.

Deus Ex has come up with a solution to one of the biggest drawbacks of wrist-adorned gadgetry: having to use both hands.

As if handheld computers and wrist-adorned gadgets weren’t enough in today’s tech-savvy world, a new smartwatch accessory wants to make controlling a wearable device as simple as moving a finger. In what would appear to be some sort of Harry Potter wizardry at work, Aria employs a layer of sensors to enable users to perform on-screen functions without ever having to physically touch the gadget. 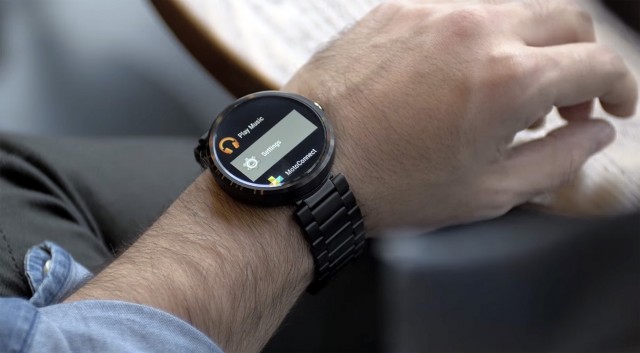 More times than not, people’s hands are constantly full of things whether it’s a caregiver with a child, a housewife preparing dinner or an engineer hard at work. In any case, what if accessing a step count, checking a recipe, or playing a song was as easy one tap of the index finger? Capable of exactly that, a wearer slaps Aria around their wrist, calibrates it and then uses it to scroll through menus, launch apps and answer calls.

Aria is compatible with a wide range of watches including Pebble Time, Samsung Gear Live, Sony Smartwatch 3, LG G Watch R and Urbane, Motorola Moto 360, Asus ZenWatch, as well as any other Android Wear device. What’s more, users can customize their gesture controls for various functions, like scrolling down a menu with a ring finger or flicking a thumb to read an email.

The brainchild of London-based startup Deus Ex, the hands-free remote is comprised of a water-resistant silicone material that attaches to the underside of the watch and is held snug against the person’s wrist. This allows it to sense and analyze distinct tendon movements. 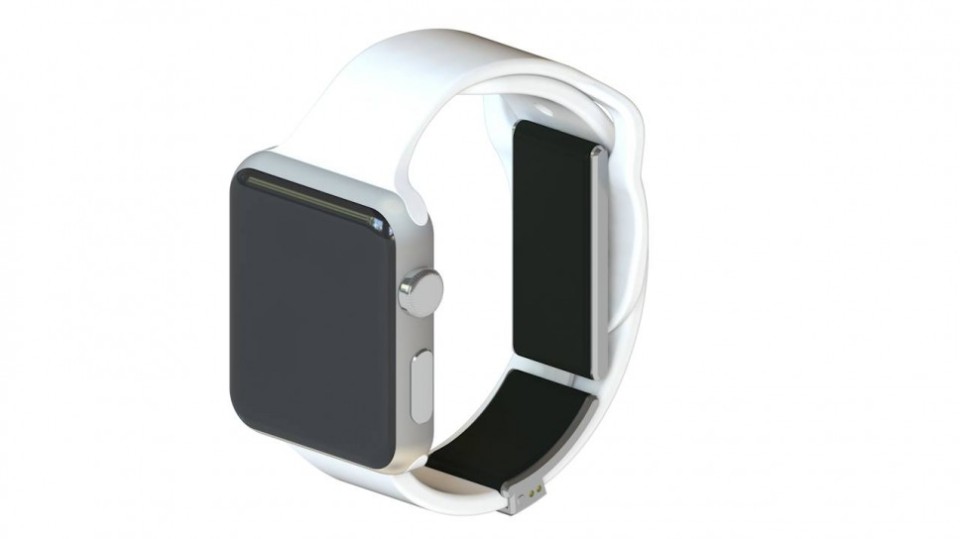 For its Kickstarter launch, Deus Ex has made Aria available in two different models: a clip for Android Wear and a smartstrap for  Pebble TIme, both of which feature varying connectivity options. The clip is Bluetooth Low Energy compatible, meaning that it should sync with countless electronics ranging from drones to action cameras. Meanwhile, the smartstrap communicates via a serial interface. Plus, the startup has revealed that it will be releasing an SDK for developers who want to explore their creativity and design apps of their own.

“Our focus is giving the best support and the best tools to the developer community. There are still thousands of applications and use cases for Aria that we want to empower you, the developer, to discover and exploit them all,” the team writes.

Interested? Head over to Aria’s official Kickstarter page, where Deus Ex is currently seeking $100,000. Shipment is expected to get underway in June 2016.

Fujitsu Laboratories has developed a lightweight, compact wearable device that makes it easy to draw letterforms in the air.

Though it seems wrist-adorned and head-mounted displays (HMDs) are all the buzz as of late, Fujitsu is hoping to change that with their newly-revealed smart ring that not only allows for motion control, but in-air handwriting as well. Sure, HMDs are already helping to provide a hands-free workplace for operators, however they don’t make it particularly easy to select displayed information, input figures, jot down memos on workplace conditions, or perform other necessary tasks. 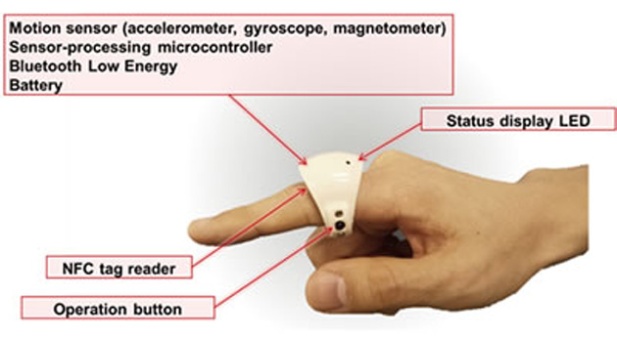 Fujitsu’s latest innovation lets wearers trace letters using their fingertip, while a built-in motion sensor translates those movements into usable characters. By “writing” in the air, users can then select menu options or make notes on photos that they take in the field — something which could certainly also come in handy during a tradeshow or while on-the-go.

“By applying proprietary technology that corrects the letterform tracings, Fujitsu has been able to improve character recognition accuracy, enabling recognition of everything from numbers to Chinese characters.” 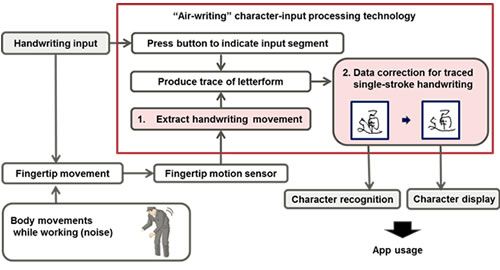 Aside from its motion sensor — which features an accelerometer, gyroscope and magnetometer — a BLE module, a status display LED, an operation button, a sensor-processing MCU, and a battery (capable of lasting roughly eight hours) are all packed into the tiny device. In addition, there’s an NFC tag reader embedded inside that will enable a user to receive instructions with a simple tap. The company believes that as data from the object to be worked on can be easily selected in a hands-free manner, the performance of maintenance and other tasks is expected to be more efficient.

While still merely a prototype, Fujitsu is currently testing the real-world usability of the device with aspirations of practical implementation by early next year. Explore the ring in more detail here.

Developed by Thalmic Labs, the Myo armband is bringing Minority Report-like technology a step closer to reality. As previously reported on Bits & Pieces, the armband allows a user to interact with a computer through motion commands. Sensors in the device measure the motion and electrical activity of a person’s arm, allowing it to figure out the specific hand gesture someone is making. Most recently, the Canadian startup has announced a number of partnerships with developers and software companies to bring gesture control to smart glasses, too. 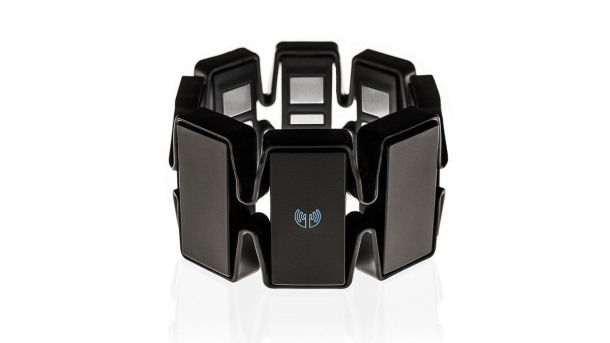 The Myo’s gesture control is now going to be compatible with a range of smart glasses, including Google Glass, Recon Jet, and Epson Moverio, with a push towards the enterprise, particularly in the construction, healthcare and active outdoor verticals. “Smart glasses like Google Glass can be extremely useful for many jobs. Doctors, repairmen, even firemen — wherever there’s a profession that sometimes requires crucial information without sitting at a desk or holding a tablet, wearable technology is up to the task,” writes Mashable‘s Pete Pachal.

“We’re big fans of wearable tech of all shapes, sizes, and uses. These new displays have created a need for new interfaces — and that need is an opportunity we’ve seized upon when developing the Myo armband. The wrist and arm are the hot spots for wearables right now, but look out — literally — smart glasses and heads up displays are going to be huge!”  Thalmic Labs’ Alex Kinsella wrote on the company blog.

Using electromyographic (EMG) sensors to recognize electrical signals pulsating through your forearm muscles, Myo can detect detailed data about your arm’s muscle activity. This enables the wearable device to identify whether the wearer’s gestures, whether they’re clenching, flicking, waving their wrist. Thalmic Labs explains that wearers will be able to get rid of remote controls, touch pads, buttons and voice control that might slow down access to information, as well as multi-step processes to either enter or retrieve data. This will be particularly useful in work environments that are noisy or require sterility. As its website states, by integrating the Myo armband, workers will have the ability to stay focused on the task at hand while reliably interacting with smart glasses through simple and natural gestures.

“We’re literally changing the way that we, as people, interact with the digital world around us,” Co-Founder Matthew Bailey tells Forbes.